Creating poetry out of violence

A smiling Maneo Mohale, wearing a flowing black dress and oversized bomber jacket, is the epitome of cool as she crosses the street towards the pub we agreed to meet at. Her appearance is somewhat deceptive.

“I’ve been crying all the way here,” she says, as she takes a seat. She hastens to add that, “It’s super good for me to cry at the moment, because the process of writing the book was very, very lonely. I’m good at crying now. It feels like a lot of releasing. I also experience things a bit delayed. Like this morning, I was telling my partner, ‘I wrote a book!’ ”

The book, Everything is a Deathly Flower (uHlanga), is a haunting collection of poems in which Mohale details in lush, deeply affecting language, how she has grappled with coming to terms with being a survivor of queer sexual abuse. 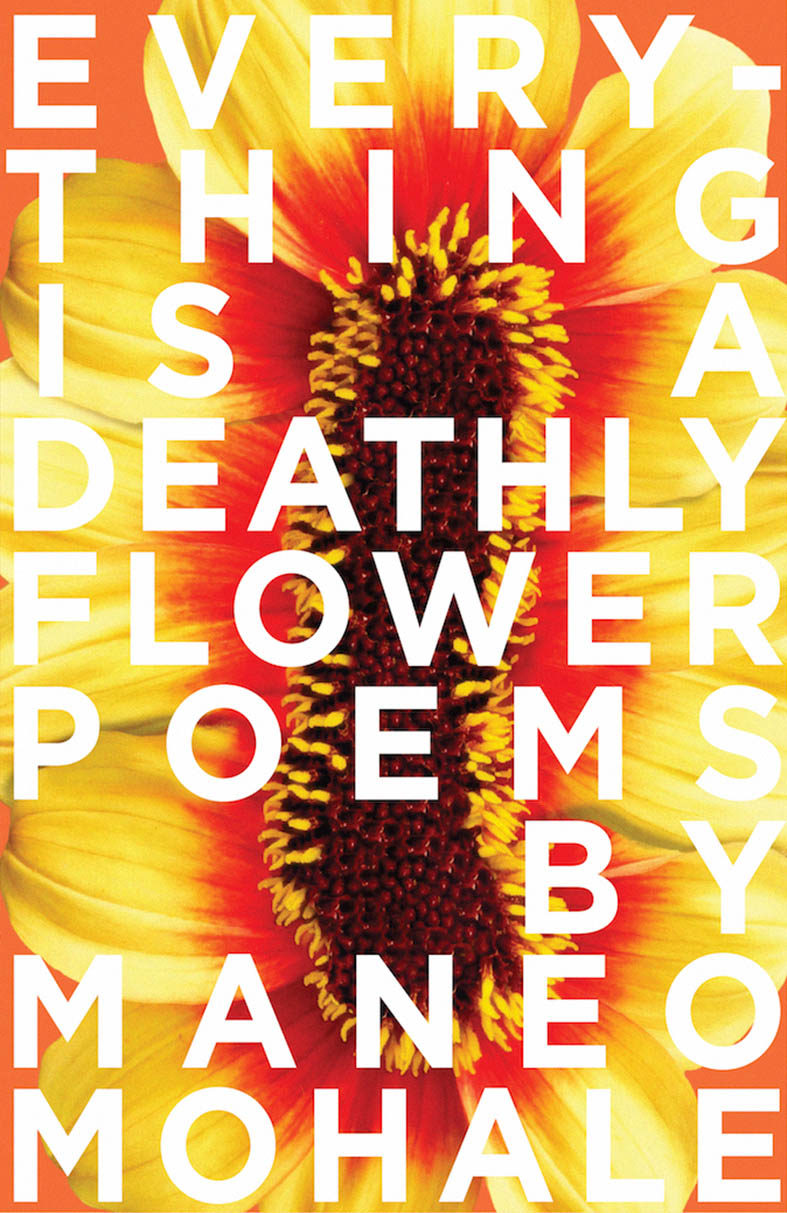 Carl Collison: The last time we spoke, you joked that “the book is a shitshow”. Do you want to unpack that a bit more?

Maneo Mohale: This book is many things. But one of the ways I’ve come to understand it is like a way of me telling a secret and keeping it a secret and also shining a light on this thing. To say this awful thing happened to me, I was 21 years old.

Especially growing up in South Africa where rape is colloquial.

It’s in the air. It’s something that you’re almost taught to expect. It’s awful.

But when a very particular kind of violence was visited on me, it was at the hands of my friend, in my room, two doors away from my parents’ room. They were sleeping at the time. So this idea of stranger danger — of being pulled into an alleyway or a post office — didn’t happen to me. It happened in my own bed in my own home.

And writing isn’t sexy. It’s not fun. I’m also a deeply anxious person, so the process of writing was an excruciating exercise.

In one of the poems, you speak about passing out in the bathroom after realising the full extent of what had happened to you.

Yes, that was, again, my delayed reaction. [I was studying at the time] and didn’t go back to class. But luckily, my professor at the time was like, “What’s going on with you? I don’t know you like this.” So I told her that there was someone in her class who did this thing [to me]. And she believed me immediately.

The first thing she asked me was, “How can I best protect you?” That was such a shock to me. Because we don’t ask survivors that. She was basically saying: “Here is a pathway to justice. I am behind you. Use me. We can fuck shit up if we need to.”

How did that make you feel?

I felt so held. And seen and believed and listened to. You know, there are so many barriers to even getting to the page. I had to first admit to myself what had happened, then tell other people, then years in therapy … There’s also this myth that trauma writing involves some kind of catharsis: that you write the book and all of a sudden you’re healed. But it was an awful process. It’s such vulnerable work, but I am compelled to do it. I want to do it. Yes, I have this tiny, secret expectation of release. But I didn’t write it to release it. I wrote it to tell the truth. I needed to tell.

Let’s talk about sexual abuse in queer spaces. There is, rightfully, the dominant narrative that sexual abuse is perpetrated by men against women and children. How does your book fit into or challenge that narrative?

I am so aware of the silences and gaps in how we talk about sexual violence in this country. Even this euphemism of “gender-based violence”. Like, we talk about gender-based violence when we don’t even have a rudimentary understanding of how gender works. There is a reckoning that is happening right now around gender, but it is still used as a synonym or placeholder for the word “women”. My story doesn’t fit or dovetail in a beautiful way, but what it does is puncture silence. It says, “This is not the full picture.”

But I didn’t necessarily set out to do this book as advocacy work or to say “queer sexual assault happens”. I know that it happens. Queer survivors know that it happens. I have a bone to pick with this idea of raising awareness because once we become aware, what do we do? We’ve been aware of sexual violence for centuries. This country was built on sexual violence. Professor Pumla Dineo Gqola wrote an entire book, Rape: A South African Nightmare, linking empire to sexual violence and I guess this book rests on that work in saying that systems of oppression are so enmeshed in each other.

How I started to understand my own relationship to my assault was that I had to link the individual to the systemic. To say, “This happened to me, but it also happened to us. It’s happening to us inside a matrix that we can’t divorce it from.” It’s no surprise that we know certain names and not others.

I suppose just the hashtag-ability or mournability of some victims, in that certain bodies are permissible to mourn. For the Mail & Guardian, I once wrote a piece called What it feels like for a femme. In that piece I touched on the idea that … for trans survivors or queer survivors, there is a particular narrative. And if you don’t fall into that narrative, you’re not legible. So the discussions around corrective rape [against lesbians] are really the only spaces in which we can talk about violence against queer people. But this intra-community violence … is so fraught. It’s so much. And it’s so difficult to be articulate around this.

One of the poems which really stand out for me is Google Translate for Gogo, in which you try finding adequate words in Sesotho to explain to your grandmother not only your sexuality, but also the sexual abuse you’re survivor of.  What did this struggle with your own language feel like?

Poems are a kind of dream space for me in which I imagine conversations that never happened or that I can’t have. So that poem was a way of highlighting the problem of language. This language we have inherited from the Global North — words like queer, polyamorous, non-binary — how does that fit in our mouths? I was asking, “How do you introduce yourself to someone who knows you with language that is inherited and doesn’t particularly fit?”

Is this search for an adequate language one you might tackle in future?

Yes, of course. And I am not alone in this work. There are initiatives such as Find New Words, which have indigenous words for trans, bisexual or whatever. Like serurubele —which means butterfly in Sesotho — to describe a trans person. One of my favourite things is how in Cruising Utopia: the Then and There of Queer Futurity, José Esteban Muñoz says that to be queer is to be in the future already. That we exist outside of time. That being who we are and loving who we love — just being queer — we are in the future, living a life that’s not ready for us.

Yes. I love being queer so much. I couldn’t imagine being any other way. I reject the notion that being black or being marginalised, I must already be acquainted with violence. Because violence is not inherent in queerness, in blackness or any kind of marginality. Trauma isn’t inherent. But, for me, writing is a way of externalising my trauma. To say, “This doesn’t belong to me. I know what happened to me and this is a way for me to say it.”

It feels really nice to walk into a bookshop, see my book and say, “This is something that happened to me, it has a face and that face is really beautiful. That through writing it, it is a face that I chose.” It’s powerful. The title poem, Everything is a Deathly Flower, is my way of reminding myself of my own power. It’s a fever dream that I write myself into. In many ways, this book feels like me holding and consoling myself. It’s a way of saying, “Look, after all you’ve been through, you are still capable of making beautiful things.”