Until queer means being free

Queer African identities do not belong in sidelined, airtight containers with clinical, unyielding labels. They are diverse, fluid, and do not exist to be perceived in a blanket fashion. Yet, they still are.

Research by members of the University of Cape Town’s (UCT’s) gender, health and justice research unit shows that homophobic discourse ensures that queer narratives are not well documented in the mainstream.

On one hand, queer people are portrayed as perverse. On the other hand, advocacy spaces often paint them as beings who are only subject to violence. And because it is important to reject a queer narrative that exists solely within these boundaries, a group of queer folk from East and Southern Africa have come together to produce Meanwhile…, a comic of short stories about everyday queer life.

The book landed in South Africa late last week. Shortly before it was publicly launched, the Mail & Guardian met with Meanwhile…’s creators and donors as they gushed over the final product. Many of the contributors were not able to make it to Johannesburg as a result of issues to do with South African consulates in their countries not being operational when they applied for visas. However Chelles, Newton J, Anchullus, Brilliant and Bubbly were able to attend. 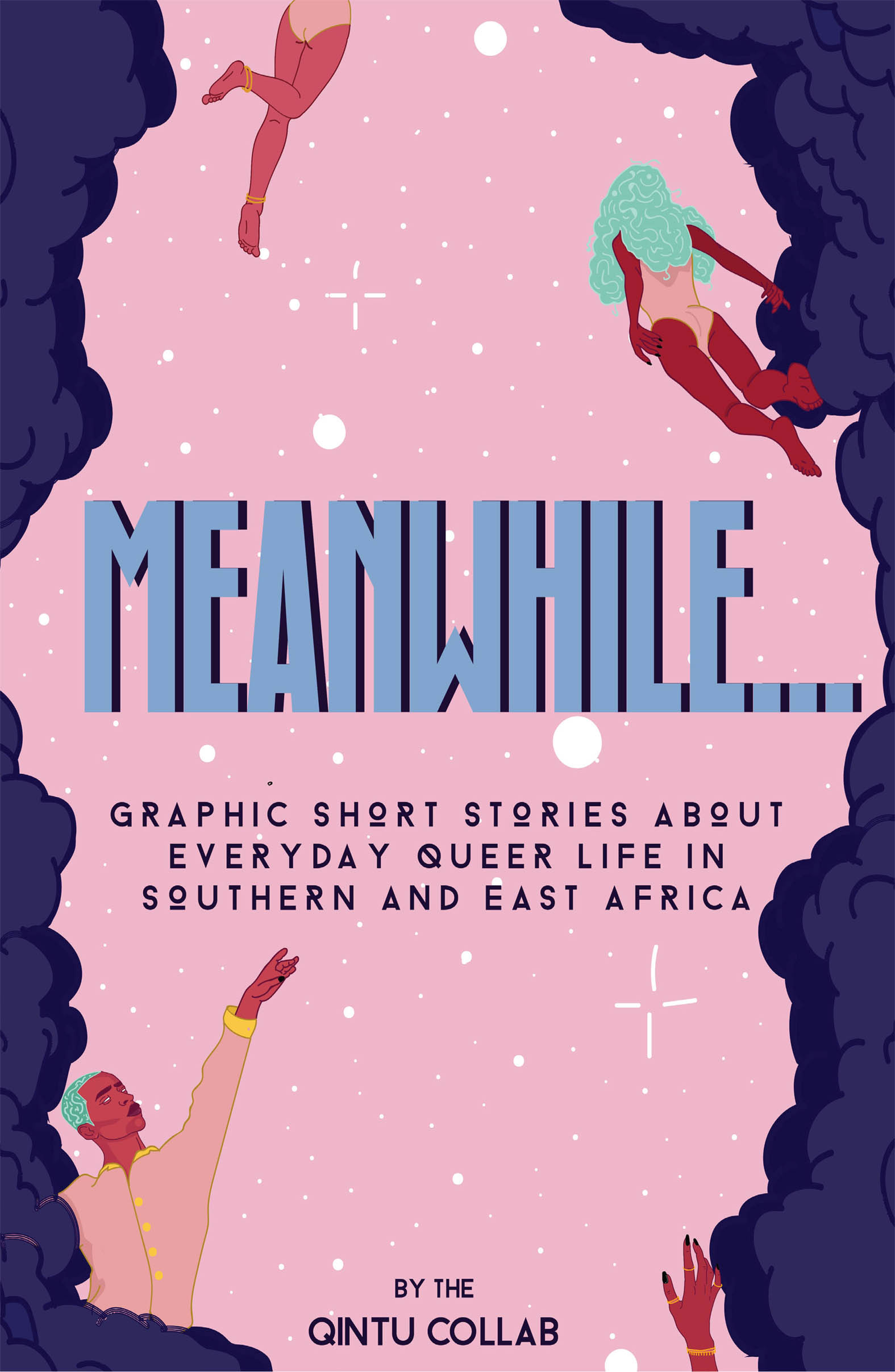 The initiative received sponsorship from the Ford Foundation and the process of making Meanwhile… began in February last year when Talia Meer and Alex Müller — from UCT’s gender, health, and justice research unit — called on queer people from across the continent to tell their stories.

Many applicants heeded the call and the selection process narrowed it down to 18 storytellers from Zimbabwe, Botswana and Kenya. Together with two academics, three artists and a journalist — all from South Africa — they formed the fully queer Qintu Collab.

For the sake of protecting the storytellers’ identities (because only one of the three countries has decriminalised the act of being queer) a large number of the contributors have been cited in this article using the pseudonyms presented in the graphic novel.

When the selection process was finalised, members of the collective travelled from their respective homes to meet in Nairobi. There, the 18 storytellers were tasked with creating timelines of their lives and making visual maps of their bodies, relationships and the spaces they occupy.

Illustrator Nas Hoosen says taking cues from their personal visual references helped the illustrating team ensure that the storytellers “retained ownership of their stories”, instead of having the illustrators dictate it.

By choosing to tell the stories in the format of comics, Meanwhile… simulates an unapologetically visible queer existence, while defying stereotypical and racist representations often found in mainstream, Western comics.

Anchullus says that an “added bonus” to using fictitious depictions is protecting the contributors’ identity when they are “back home in the settings where we often have to shrink and conceal ourselves to survive”.

In addition to its sponsorship from the Ford Foundation, Qintu Collab formed a publishing partnership with nonprofit organisation Gala Archive. Gala acts as a living and growing reference of LGBTQIA+ life on the continent. Its principles are in line with the creation of Meanwhile… in that it looks to correct systematic erasure and reject the concept of queerness as being unAfrican.

As a part of the partnership with the Qintu Collab, Meanwhile… was published by MaThoko’s Books, the Gala imprint. For the past eight years, the publisher has offered its services to books with LGBTQIA+ themes. Some of the publications issued through MaThoko’s Books include Queer Africa (2013), Under Pressure (2014), Proudly Malawian (2016), Like the untouchable wind (2016) and Queer Africa 2 (2017).

The comics in Meanwhile… are taken from the real-life accounts of black queer folk aged between 18 and 26, and cover themes such as urban and rural life, health (both mental and physical), romance, sex, finances, religion, denial and rejection.

Snapshots of the everyday

Meanwhile… spills out of the binary either/or boxes designated to the LGBTQIA+ community by telling these fuller, multilingual stories that urge the reader to acknowledge their intersectionalities. Through a visual reliving of its contributors’ experiences Meanwhile… is an absurdly realistic and graphically quirky text that is sure to upset the conservative and comfort the confused or censored.

Although Meanwhile…’s narratives do not clothe the protagonists in victimhood, their stories cannot to be boxed into the “it gets better” narrative either. Instead, each story encapsulates the sense of waiting, struggling and hoping that comes with existing right now as a queer African.

“Most of the stories start with sadness but, by the end, the reader will see how this is us taking over the world like the superheroes in other comics,” says Zimbabwean contributor Chelles, before her colleagues “mmm” and nod in agreement.

Through the telling of personal stories that more often remain private, the graphic novel takes us into the intimate spaces of queer existence, challenging stereotypes and making the personal political.

In Meanwhile…’s introductory essay, Meer and Müller build on this concept by suggesting that activism can be “intermediate and ongoing” merely through existing.

The book’s focus on the neglected everyday that takes place over and above visible queer narratives is a play on the well-known comic subtitle “meanwhile…”. This phrase refers to the things that happen while the events of the previous frame took place.

Meanwhile… also exists as a practical resource for education. Brilliant, a Botswana-based contributor and founder of queer portal setabane.com, points to his country recently nullifying anti-gay laws. “We’re trying to map a way forward, so how are we going to get people outside academic spaces to understand us if we are coming with these huge terms?”

This challenge also exists in African academic spaces, because the likes of LGBTQIA+ and gender activist, Lethabo Mailula, “have to depend on the literature and the pedagogy of Western queer scholars and writers”.

In addition to the Western language not speaking to the African context, queer Africans cannot rely on Western scholars and writers as a reference because they are partially responsible for the stigma of queerness being unAfrican.

Meanwhile… has the potential to educate beyond the way that academic research compilations can because its aesthetic and diction are more approachable and comprehensive.

Ideally, its contributors would like to see the book becoming visible to the point where it is incorporated into curriculums of high schools on the continent — and then the world.

For now, the contributors part ways with one another, leaving their new-found sense of community and solace behind to do the work on the ground in their homes by existing, loving, hoping, teaching and forgiving.

Meanwhile… is available at the Gala Archive for R120. A selection of comics from the novel are featured in The Art of Comics exhibition, which runs until November 18 at the Johannesburg Art Gallery. For more information visit gala.co.za