Want a jet, a car, a house? Gupta sale is on

More than a billion rands of the Guptas’ assets are being sold off — but the state is unlikely to recover a cent from the alleged looting of its coffers by the family.

Instead, business rescue practitioners will use the proceeds to settle the Guptas’ debts. The family is said to be fighting tooth and nail against the “fire sale” of their prized assets.

At least R420-million worth of property owned by Gupta-affiliated companies has been put up for sale. The properties include several homes in the exclusive suburb of Saxonwold in Johannesburg, a seaside home in La Lucia north of Durban, a game lodge near Lephalale in Limpopo, and the former residence of Mark Thatcher in Constantia in Cape Town.

Also up for sale — to those with deep pockets — are two private jets, one of which is still stranded in Dubai.

The Mail & Guardian was unable to identify all the creditors, but the state is certainly not one of them. With no formal charges laid against the Guptas, the state is ineligible to receive the proceeds from any of the sales.

The business rescue practitioners, who came on board in February last year, had to evict the son of ANC secretary general Ace Magashule from one of the Gupta-owned houses in Saxonwold, near Zoo Lake. Tshepiso Magashule used that address as late as May this year, according to records accessed by the M&G.

In 2016 the four main banks — Standard, Absa, Nedbank and FNB — closed accounts linked to the Guptas after suspicious transactions occurred.

The business rescue practitioners say the Guptas initially appeared to welcome the business rescue operations, which could have led to the re-establishment of legitimate banking facilities in South Africa, but are now opposed to it.

Representatives of the family in South Africa did not respond to the M&G’s questions about the sales.

Among the Gupta properties on the market is the infamous compound near the Johannesburg Zoo, seen as the seat of power of the Gupta family. It was also the scene of several alleged efforts to corrupt high-ranking government officials, including former deputy minister of finance Mcebisi Jonas and MP Vytjie Mentor.

Prospective buyers should, however, be warned that the compound has lost its veneer of prestige.

A mid-week visit to the property told a story of a once powerful family in decline. The cloistered compound appeared to be abandoned, the flashy cars and heavy-set security personnel conspicuous by their absence. Beyond the large, padlocked gates, a fountain seemed to be suffering the effects of stage one water restrictions, or indeed of the enduring drought, while the garden, too, was in a state of neglect.

The M&G understands that a stand­alone property in Saxonwold, which once housed a Gupta cousin, has also been put on the market. But Tyson Property, which has facilitated the sale of some of the properties, would not confirm this, simply stating that it was bound by a strict ethical code that protects the privacy of their clients.

In Saxonwold, an “old money” suburb, properties routinely fetch prices in excess of R8-million. But at least one Gupta house has been sold for only R3.5-million.

“We cannot disclose confidential information about the sale of any property prior to its registration by the new owner. However, we would like to reassure you that we follow the law when processing all transactions,” said Tyson Property in a statement to the M&G.

At least 100 vehicles have previously been linked to the Guptas’ Saxonwold properties by the National Prosecuting Authority’s Asset Forfeiture Unit, including a Maserati, a Porsche, a Lamborghini and Range Rovers.

The 2015 Bombardier 6000 jet, with tail registration ZS-OAK, was last month put up for sale for about R440-million by Export Development Canada (EDC), which had financed the plane. Another asset up for sale is a Bombadier jet.

The private jet, which had flown the likes of former mineral resources minister Mosebenzi Zwane, was 80% financed by the EDC. The Guptas, through another of their companies, Westdawn, paid a R30-million deposit.

The Canadian company, which lodged a legal claim against the Guptas last year, grounded the jet in December 2017 at EuroAirport Basel Mulhouse Freiburg in France, after the family defaulted on the loan agreements. The EDC cited in its court papers that the jet was likely to be forfeited under South Africa’s Prevention of Organised Crime Act, given that the Guptas were under investigation. Business practitioners are trying to rescue eight companies, including the Optimum Coal Mine. (Paul Botes/M&G)

Responding to questions after he had delivered the opening address, Ramaphosa weighed in on efforts to rid the country of corruption and measures to be taken against those implicated, which included the Gupta family.

“We have been working on how those who are complicit in the widespread corruption can be brought to book,” Ramaphosa said in an attempt to re-assure potential investors.

He had once travelled to Japan in a chartered plane owned by a Gupta company when he was deputy president because of a shortage of suitable planes for VVIPs (“The truth about the presidential gravy plane”, M&G, September 18 2015).

Business rescue practitioner Louis Klopper said negotiations are under way to secure the sale of the 10-seater jet in Dubai.

He added that one of his partners was representing VR Laser.

“Those are the eight companies placed under business rescue in February last year from a resolution caused by the so-called unbanking of the Gupta family and their businesses. It was management of the Oakbay group that got in contact with my partner to ask for advice on what to do,” said Van Niekerk.

He said the choice was to either liquidate the companies or place them under business rescue to see whether they could be rescued.

But, he added, “That [rescuing the companies] was never really an option because what’s the point of trying to rescue the companies, get banking facilities and what not just to give it back to the Guptas. That would defeat the purpose,” said Van Niekerk.

He also confirmed that all the Gupta properties registered in the name of these companies had been placed into a business rescue plan and were being sold off.

“And again, there are creditors that need to be paid. So properties and assets are being sold to raise money to pay off the creditors. That’s what you call a structured winding down of the company. But the plan, with Islandsite, must be implemented. There are a bunch of creditors like the Bank of Baroda … Well, you know, the plan is to sell the properties. Make no mistake, the Gupta associates aren’t making this happen without a fight,” Van Niekerk said.

Department of justice and constitutional development spokesperson Crispin Phiri told the M&G that the government has petitioned the United Arab Emirates (UAE) to ratify mutual assistance agreements and extradition treaties signed by former justice minister Michael Masutha in 2017. This is to allow the agreements, which are international treaties, to be part of the country’s domestic laws. 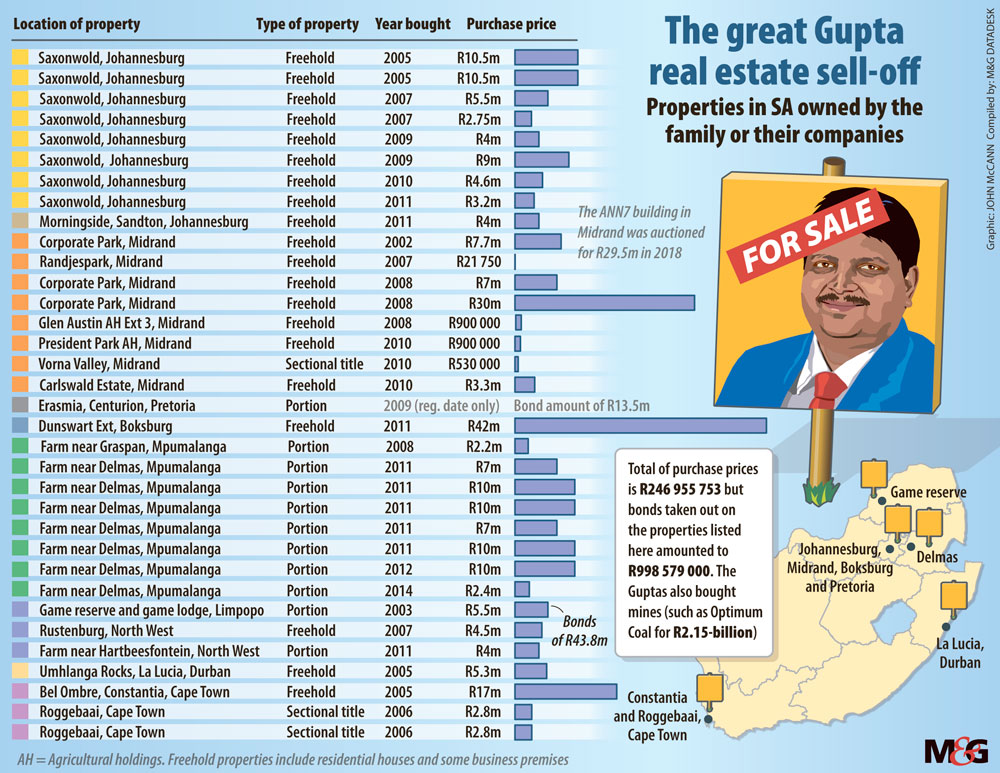 “Whether or not these instruments get exercised would be informed by whatever investigative work is done by our law enforcement agencies including the NPA or the Hawks. On our side it would largely be administrative work,” he said.

But this does not signal that the state could recover any money if ever the Guptas were to be brought to book.