Transformation in the rooibos sector has been slow. The genocide of the indigenous San people and the virtual enslavement of the Khoi people in rooibos-growing landscapes of the Cape centuries ago, coupled with a government-controlled monopoly during the apartheid years, has led to a highly skewed and fractured industry.

Today, this R300-million local enterprise remains in the hands of about 300 white commercial farmers who cultivate 93% of the planted area. About 200 small-scale coloured farmers — largely confined to the dryer, more marginal parts of the winter rainfall fynbos region — produce only 2% of all rooibos tea.

A benefit-sharing agreement announced today by the minister of environmental affairs — between the rooibos industry and representatives of San and Khoi organisations — could signal the beginning of a change. More than R10-million a year — depending on weather, volumes and the price of rooibos — is likely to be distributed to trusts set up by San and Khoi organisations.

If implemented judiciously and strategically, this could well change the face of rooibos in South Africa.

Since 2010, San and Khoi organisations have demanded that the 100-year-old rooibos industry recognise the role that their traditional knowledge played in its development. A 2014 government-sponsored report concluded that there was “no evidence to dispute this claim” and required those involved in the rooibos sector to engage with San and Khoi people to negotiate a benefit-sharing agreement as required by “access and benefit-sharing” provisions of the Biodiversity Act. These stem from the United Nations Convention on Biodiversity and its Nagoya Protocol.

The industry’s initial position was that there was no convincing evidence of San and Khoi traditional knowledge of rooibos tea, and that it would not be open to entering into a benefit-sharing agreement. It also dismissed the government report as lacking credibility, and commissioned its own research. This research indicated a “record of absence” of rooibos uses in precolonial and early colonial times.

Such insights are, however, not necessarily conclusive. San and Khoi people were part of an oral culture and the absence of a historical record does not convincingly prove anything. As historian Nigel Penn observes, “Recorded history is usually what dominant cultures leave behind them as they relegate the dominated to the shadowy status of ‘people without history’.”

Leaving aside questions of “who was first”, it is indisputable that the rooibos industry drew from traditional use and knowledge, although it likely evolved as a hybrid of different knowledge systems.

Driven by concerns that they would not receive a license to operate if they did not have a benefit-sharing agreement in place, the industry entered into a series of protracted negotiations, facilitated by the department of environmental affairs. In March 2019, a benefit-sharing agreement was finally reached between the rooibos industry, represented by the South African Rooibos Council, and traditional knowledge holders, represented by the South African San Council and the National KhoiSan Council.

At the agreement’s core is an annual traditional knowledge levy of 1.5% of the price that is paid by processors to farmers per kilogram of harvested rooibos. After being deposited into the government’s bioprospecting trust fund, the levy will be paid in equal parts to the San Council and National KhoiSan Council. “Rooibos indigenous farming communities” — defined as “rural farming communities in rooibos growing areas who consist of descendants of original Khoi-Khoi peoples” — are to receive a portion from the trust set up for the Khoi people although the exact proportion has not yet been determined.

Non-monetary benefits will also be “explored” and could include the creation of employment opportunities, bursaries, development schemes, mentoring and the facilitation of livelihoods. 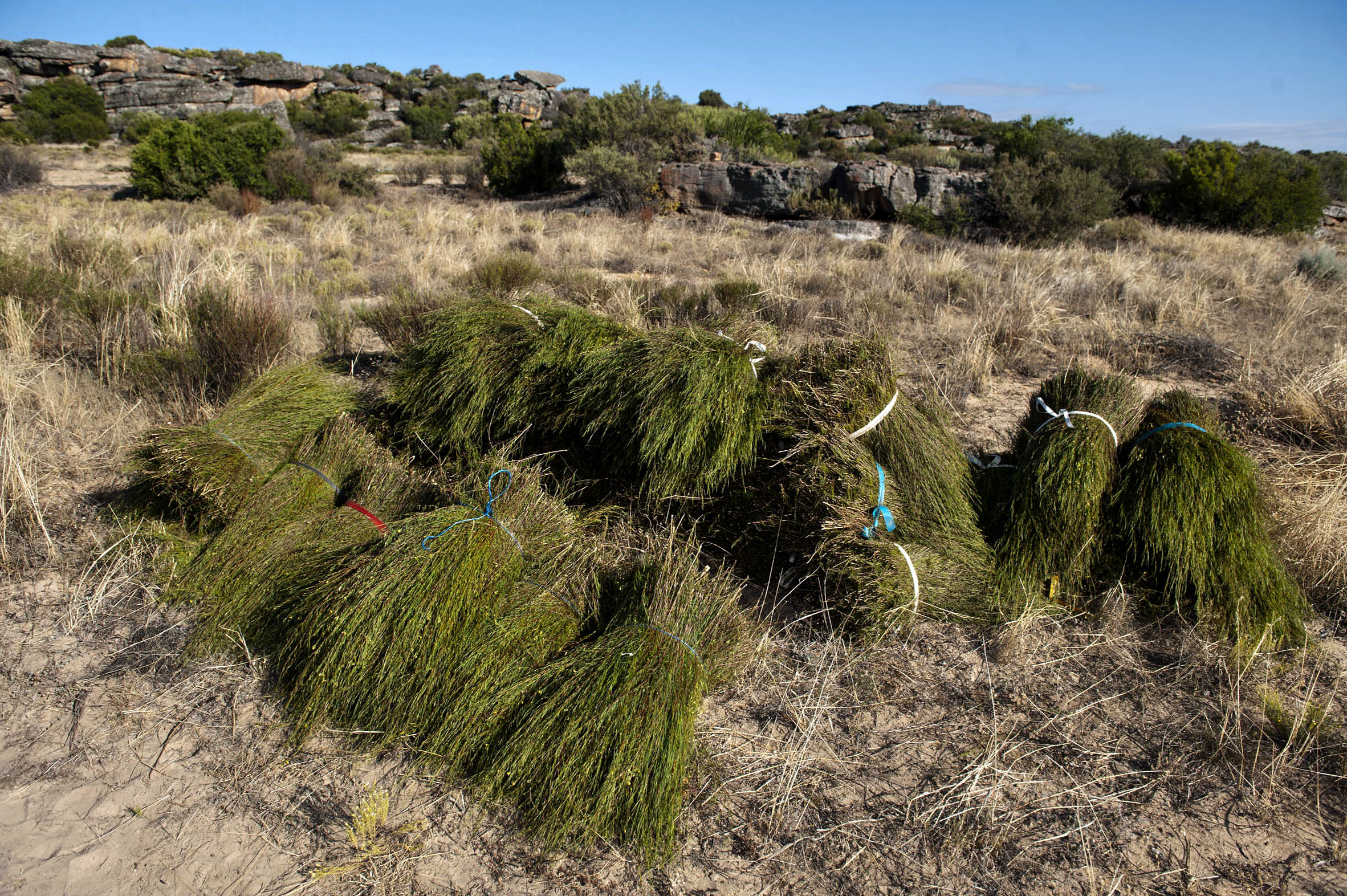 The agreement is a landmark, not only because it acknowledges the indisputable contribution made by traditional knowledge holders towards the establishment of the industry, but also because it could bring significant material benefits to indigenous San and Khoi people, many of whom remain marginalised and poverty stricken.

Such promises, linked in particular to traditional knowledge of plants, have long been in the offing, but have never quite materialised in the form of anything substantial. The succulent plant hoodia, for example, touted as a miracle anti-obesity drug, formed the basis for a benefit-sharing agreement between the Council for Scientific and Industrial Research and the South African San Council. But the agreement amounted to very little when clinical trials revealed negative health effects.

Other indigenous, plant-based agreements linked to pelargonium, buchu and kanna have brought community benefits, but nothing in the order of that anticipated from rooibos.

That the agreement offers restorative justice is undeniable, but the road ahead is far from smooth. Questions of how exactly benefits will be shared at a local level remain unresolved, and could result in conflicts. The long and troubled history of these oppressed communities has included dislocation, fracturing of family and community structures, and the undermining of people’s own initiatives.

The presence of strong, effective and transparent governance structures and sound external support will be essential to manage conflicting priorities proactively and ethically so that real benefits can be derived by all of the intended beneficiaries.

Important questions have also been raised about who the agreement does not include. In contrast to the proactive position that has been taken by San and Khoi organisations, many harvesters and small-scale farmers in the areas where rooibos has formed a central part of livelihoods and cultures for decades remain oblivious of their rights under the Biodiversity Act.

Although small-scale rooibos producer communities of the Cederberg and Suid Bokkeveld are nominally included in the agreement as part of the Khoi people, this assumes that such communities identify with contemporary Khoi political structures. These coloured farmers are typically mixed-race descendants of European settlers, former slaves, and Khoi and San people, who do not easily identify as “indigenous”. However, this could change.

As one farmer remarked: “The [rooibos] agreement means that people are asking themselves who is Khoisan. Everyone now wants to be recognised as Khoisan.”

The agreement also assumes that inhabitants of the Cederberg and beyond are sufficiently organised to leverage benefits and be effectively represented.

This is certainly not the case for many people in the region who are unemployed and landless, working as farm labourers, displaced, residing elsewhere or not affiliated with co-operatives. Where do they stand? And what responsibility do the government and others bear for ensuring their inclusion? 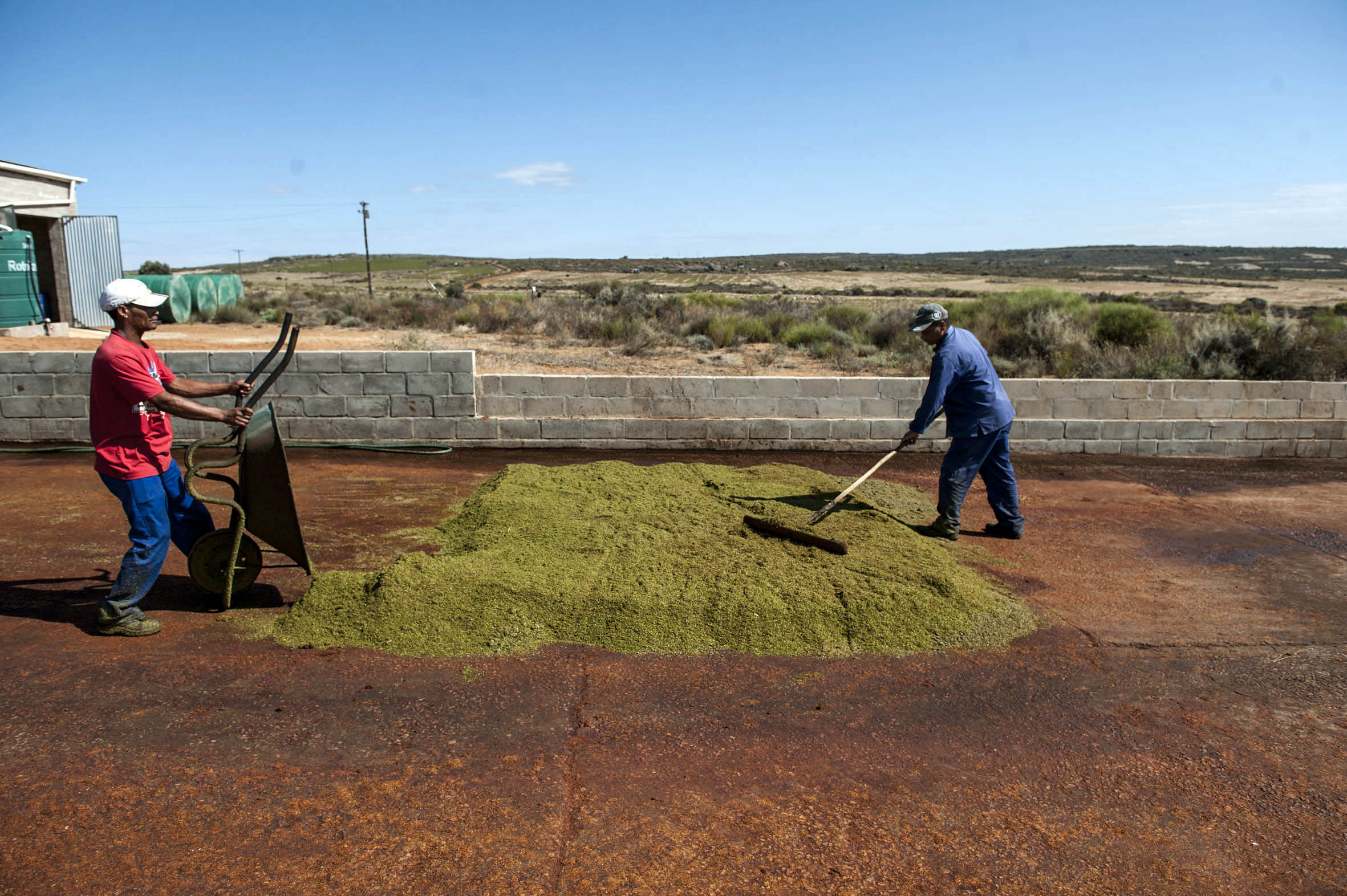 Workers getting the chopped up tea ready to dry. (David Harrison/M&G)

Creative ways could be found to address these concerns. Among Khoi organisations funding might be used, for example, to purchase land for rooibos production by coloured and black farmers, and thus begin to shift patterns of ownership. Funding might also be used to purchase equity in the industry, and thus begin the much-needed process of transformation.

Among San organisations, located hundreds of kilometres from rooibos-growing areas, priorities are, however, likely to be more localised rather than centred on the transformation of the industry.

At a time when the voices of indigenous peoples and local communities are increasingly trammelled elsewhere, the agreement is a pioneering step for South Africa. Its potential use as a model for other indigenous plants, such as honeybush and buchu, is already under discussion. Getting it right could not be more important.

Agritech can reduce the female unemployment rate in South Africa