The onward march of Hindu nationalism

Last Saturday, the Supreme Court of India delivered its so-called Ayodhya verdict — that is, its ruling as to who is to have title over India’s most disputed religious site, namely the ground upon which the Babri Masjid, a 16th-century mosque, stood until it was demolished by Hindu nationalist mobs in early December 1992.

Located in the town of Ayodhya in Uttar Pradesh in northern India, the site is disputed: Hindus claim that it is the birthplace of the Hindu deity Lord Ram, and that a Ram temple stood on the grounds until the Babri Masjid was constructed on the orders of Emperor Babur, the founder of the Mughal Empire. Hindu nationalist groups have claimed their right to the 10 000m2 of land in question since the late 1940s, and the current case — which has been pursued in the courts on behalf of the Ram Lalla (the infant form of Lord Ram) — has been ongoing since 1989.

The case was unanimously settled in favour of the Hindu plaintiffs: the disputed site was declared to be the property of the Ram Lalla and the central government was ordered to appoint a trust to oversee the construction of a new temple there. The court also decided that 20 000m2 of land be allotted to the Muslim party to the title suit, for the construction of a mosque. Speaking to the nation, Prime Minister Narendra Modi claimed that the verdict had brought a “new dawn” to India. “Many generations may have been affected by the dispute,” he said, “but we must resolve that we make a new start for a new India.”

There are real questions, however, as to just what kind of new India is heralded by this verdict. What Modi’s conciliatory rhetoric conceals is the fact that, with this ruling, the Supreme Court has in fact sanctified a grievous act of violence that was instrumental in bringing his party — the right-wing, Hindu nationalist Bharatiya Janata Party (BJP) — to the pinnacle of political power in the country. To properly understand the ramifications of what transpired in the highest court in the land on November 9, it is worth considering this trajectory in some detail.

In 1990, India was on the cusp of a dramatic political convulsion that unsettled caste-based power relations that had prevailed since independence in 1947. In response to increasingly militant demands from below, the central government — a coalition of non-Congress parties known as the National Front, with outside support from the BJP — introduced a comprehensive scheme of affirmative action, granting reservations of 27% of all jobs in the public sector to lower caste groups. This caused uproar among India’s upper castes — the very same groups who constituted the core constituency of the BJP, which had been founded as a political party only a decade earlier.

Responding to these developments, the BJP president Lal Krishna Advani launched a rath yatra — a chariot procession — that was to make its way across India to Ayodhya to lay claim to the disputed site of the Babri Masjid. In doing so, Advani and other prominent BJP politicians aligned themselves decisively with the Ram Janmabhoomi (literally, birthplace of Ram) movement of the Vishva Hindu Parishad (World Hindu Council) — a central node in the vast network of the Hindu nationalist movement — and its demand that the Babri Masjid should make way for a Ram temple. Advani’s goal was obvious, namely to shore up and consolidate upper caste support for his party. 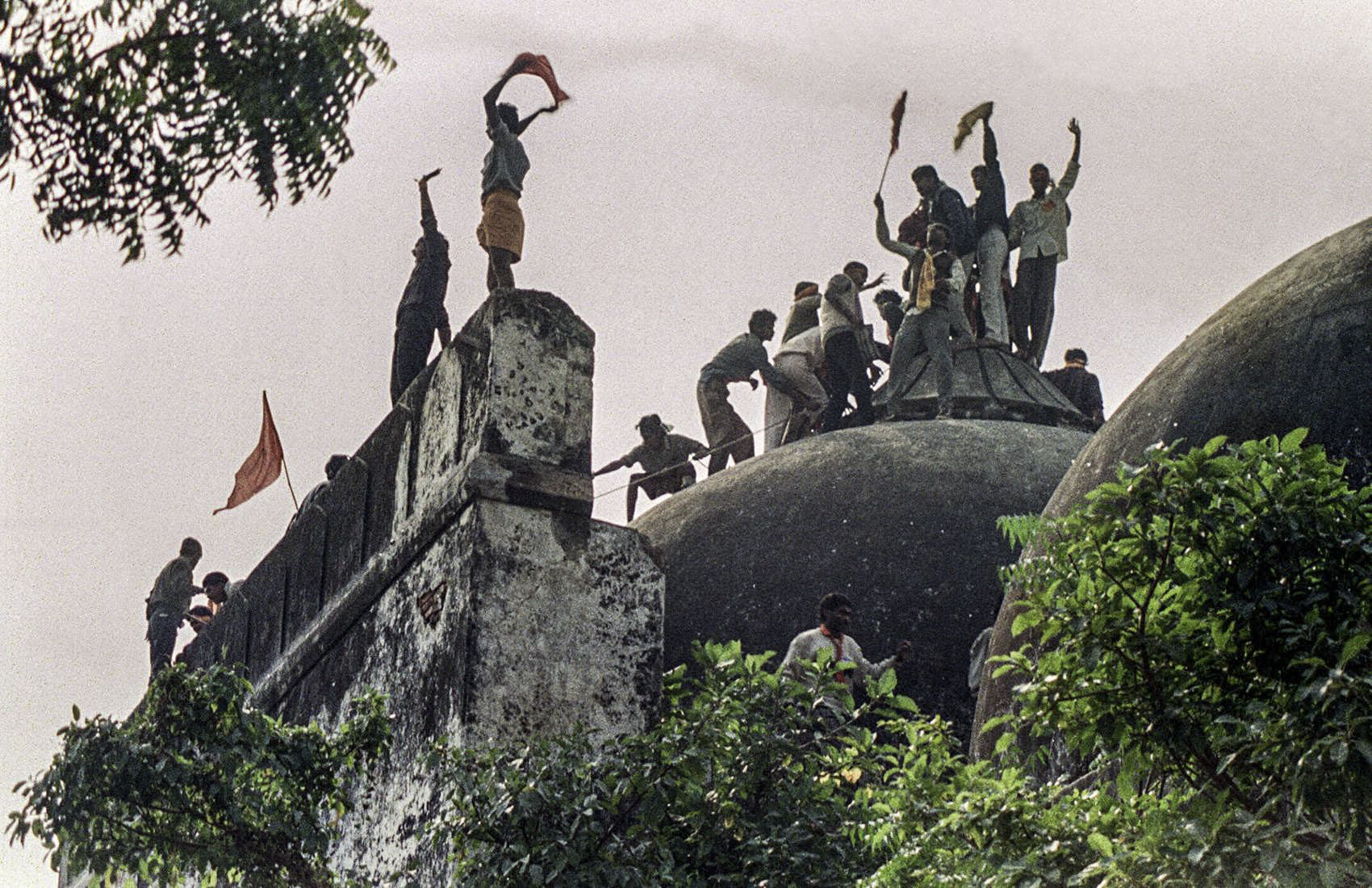 Beginning in late September 1990, Advani’s yatra mobilised thousands of volunteers — among them, Narendra Modi, who at that point in time was a prominent Hindu nationalist activist — and crossed through hundreds of towns and villages. Deploying hard-line religious symbolism, the procession sparked violent communal riots, and Advani was finally arrested in late October as he attempted to cross into the state of Uttar Pradesh. Despite Advani’s arrest, large numbers of Hindu nationalist activists — estimates range between 40 000 and 75 000 — made their way to Ayodhya and laid siege to the Babri Masjid until they were dispersed after three days of running battles with security forces.

This, however, was not the end of the movement for a Ram temple in Ayodhya. On the contrary, in early December 1992, the Rashtriya Swayamsek Sangh (RSS) — the ideological backbone of the Hindu nationalist movement — organised a rally that attracted about 150 000 kar sevaks (activist volunteers) to the site of the Babri Masjid. After speeches by Advani and other central BJP politicians, the crowd attacked the mosque and demolished it. The destruction of the mosque sparked new rounds of communal violence, in which more than 2 000 people — the majority of whom were Muslims — were killed.

Whereas the demolition was a tragedy for India’s Muslim citizens, it was a successful strategic move on the part of the BJP, which had withdrawn its support from the National Front government after the violent end of the rath yatra. In the general elections that ensued in 1991, the party, which had now firmly established itself as a defender of Hindu values and interests in a changing nation, won 120 seats — up from 85 seats in the 1989 elections. And by the end of the 1990s — a decade that witnessed deepening communal polarisation — the BJP found itself for the first time at the head of a national coalition government and decisively established as a force to be reckoned with in Indian politics. In other words, Advani’s ploy to galvanise electoral support by weaponising religious mythology panned out, and as such, it constitutes a crucial prehistory to today’s political scenario in India, in which the BJP under Modi rules supreme.

But the Ayodhya verdict is more than a legal consecration of the BJP’s violent road to national political power. It also adds momentum to the onward march of Hindu nationalism that has occurred since Modi came to power in 2014. The verdict follows hot on the heels of the annulment of Article 370 of India’s Constitution in August this year, which effectively reduced Kashmir, India’s only Muslim-majority state, to the status of a union territory.

It also follows in the aftermath of the announcement of the revised national register of citizens in the northeastern state of Assam — a move that was widely touted by the BJP as a means of ridding the state of illegal immigrants from Bangladesh, and which effectively declared almost two million people to be non-citizens.

These are acts of Hindu nationalist statecraft, in which religious majoritarianism is allowed to dictate law-making.

What is particularly dramatic about the Ayodhya verdict is, of course, the fact that it signals that the Supreme Court, which is supposed to be an independent guardian of India’s secular constitutional democracy, is aligning itself behind this project. The 989-page text that laid out the reasoning behind the ruling states that once it is accepted that the religious beliefs of a worshipper are genuine, the court “must defer to the belief of the worshipper”. In the Supreme Court’s argument, this is framed as a secular stance — deference to faith, the verdict says, shall apply to all religions.

Yet given the current balance of power in India’s polity, there is little reason to doubt that what legal scholar Faizan Mustafa has referred to as the privileging of faith over law is likely to fortify majoritarianism. This is worrisome in a context in which more legislation — the Citizenship Amendment Bill and the Anti-Conversion Bill — that will further cement Hindu nationalist statecraft is on its way. The writing of the Hindu nationalist project into law is likely to make India no country for those of its citizens who do not fit this majoritarian mould.

Alf Gunvald Nilsen is professor of sociology at the University of Pretoria. He researches social movements and the political economy of development and democracy in the Global South — with a specific focus on India and the Brics countries