Fear inside the church of refugees

Every square centimetre of the floor is covered with people lying on blankets or mattresses. Only the pathway leading to the altar, which is also occupied, is open to walk through.

Before seeking shelter in the church, approximately 1 000 refugees and asylum seekers had staged a sit-in at the offices of the United Nations High Commission for Refugees (UNHCR), less than 500m away.

They wanted to be removed to another country. But they were evicted by a court order and, faced with the police force and stun grenades, were received by the church.

Now church leaders are scratching their heads, wondering how long they will stay.

Jean-Pierre Balous, the refugee group’s leader — and one of only a few people allowed to talk freely to journalists — shuffles to the altar. Known as JP, he is surrounded by men seemingly forming a protective wall around him.

Balous is there to give people an update on the latest meeting between the refugees and government authorities.

But first, he wants the children to sing. There’s no real melody. It is mostly chanting. Only four words. “No more South Africa!”

“I’m not here to be corrupted. I’m here to defend my generation,” he tells the crowd in a measured but authoritative tone.

“I need a generation for tomorrow. Because the government of South Africa already destroyed our children’s generation.”

Balous gives a stirring address. There are more accusations against the government, the UN and other refugee rights bodies than there is information on when people will be moving out of the church. He accuses the UNHCR of being corrupt, saying they will be made to answer. 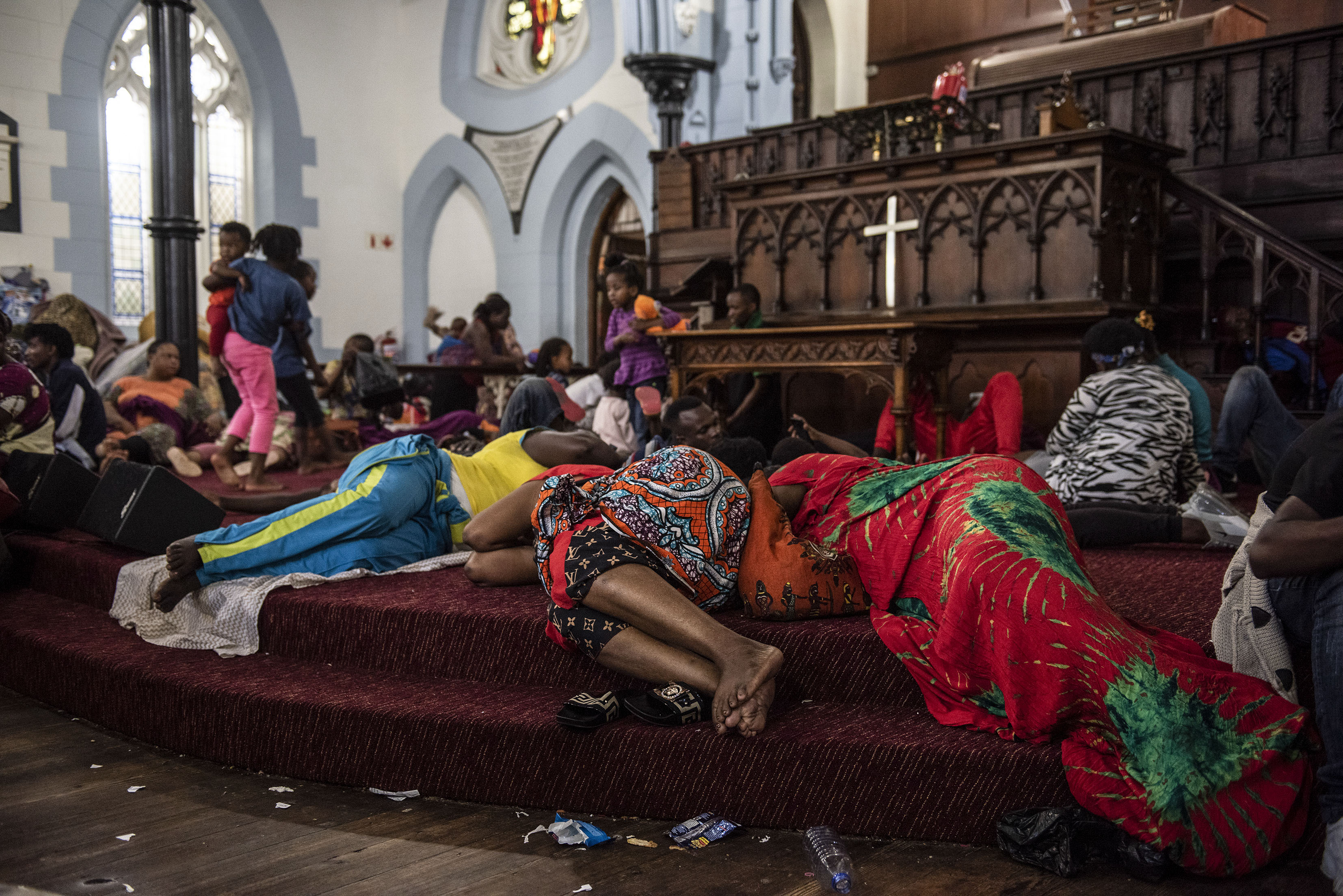 The refugees are said to be living in fear of Balous who has encouraged them to give up their homes, children’s schools and jobs in order to put pressure on the government and United Nations to relocate them to other countries. (David Harrison/M&G)

Balous also tells people that the government wants to kill refugees. “What does the government of South Africa want to do? Do they want to exterminate refugees? Finish them? They don’t want to seek anything good for refugees.” There are murmurs of agreement.

But, although he seems to hold sway in front of this captive audience, some in the refugee community accuse Balous — who has himself applied to be relocated — of taking advantage of heightened xenophobic tensions for his own benefit.

The Mail & Guardian spoke to several people who have either left the church or who are still inside because they don’t have anywhere else to go. They shared stories of fear and intimidation — they are also too afraid to share their identities.

One person, who agreed to be interviewed by the M&G, was on three occasions stopped by men who act as security outside the church. They were told the security was necessary because someone had apparently entered the church with a gun.

Another person said that they were encouraged by WhatsApp messages to quit their jobs, give notice at their accommodation and take their children out of school. They were then made to believe that UNHCR planes were waiting to take them out of the country.

“We received text messages saying we must meet at the UNHCR’s office. The messages also said how bad home affairs is. It said the UNHCR will relocate us if the issues of documentation aren’t sorted out. “

All this seems to have been a way of getting a mass of people to camp outside the UN body’s offices.

Another person said that even though the UNHCR said it could not relocate groups of refugees, and that applications were done on an individual basis, they were told by leaders such as Balous that they would soon leave: “JP also gave promises. Today it was one thing, the next day it was another. I finally got fed up.”

The person said the leaders don’t want people to leave the church, because it would mean they would lose leverage during negotiations with the government and the UN.

“This morning I got a phone call at 4am. It was from JP’s people. They asked where I was and that I must come back to the church because the UN was there to relocate. At 4am.”

Several nongovernmental organisations and facilitators close to negotiations are questioning the motives and demands of refugee leaders.

One NGO worker said: “A lot of concerns were raised about the whole structure of what is happening there.” 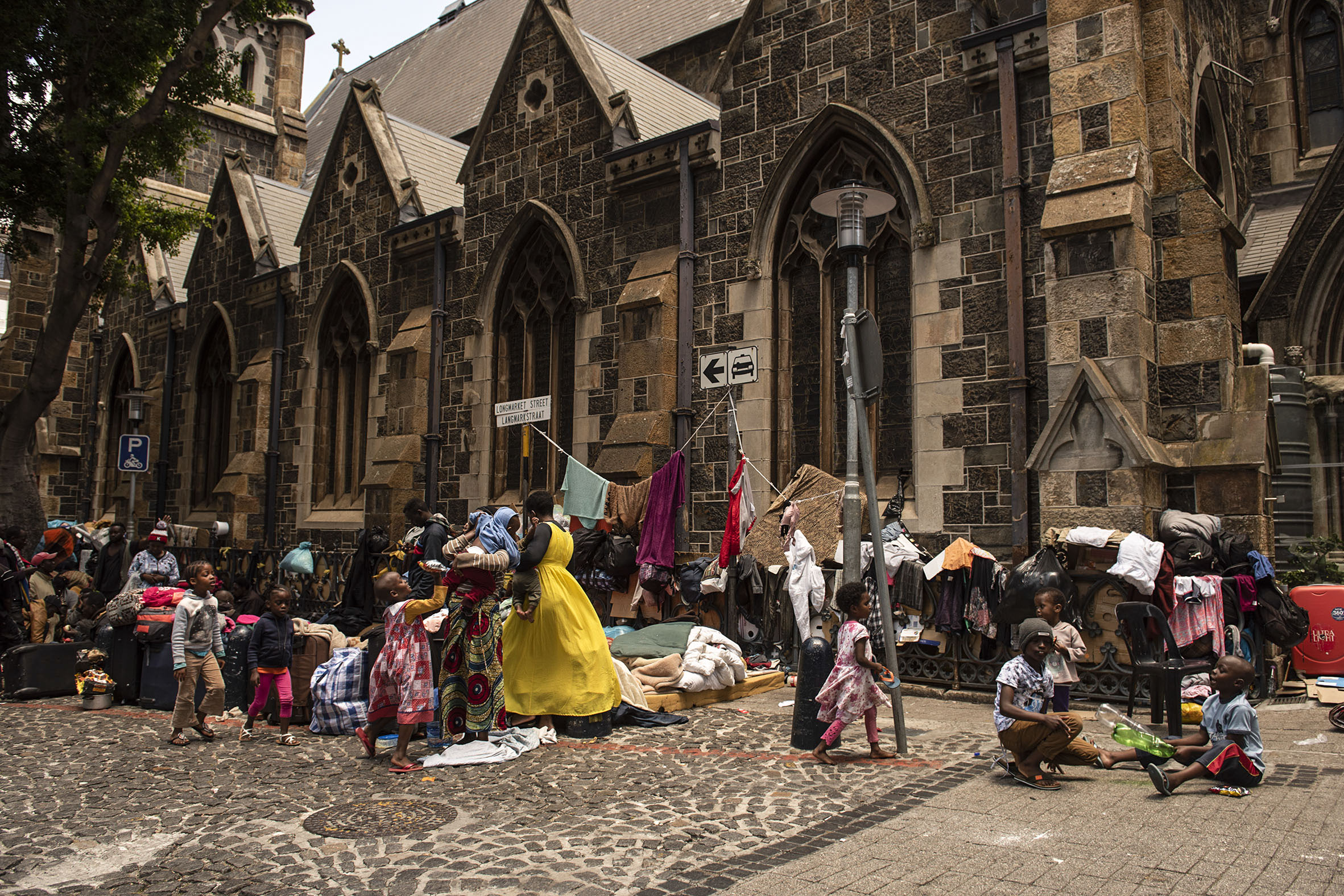 A person close to the negotiations said: “Bodyguards around the leaders … people prevented from coming into the church … there are a lot of stories that we have heard. But we can’t independently confirm them.”

Another person helping to facilitate the negotiations said: “There’s a lot of peddling of lies. Like there was the story of a lot of children who were missing, but none of them were missing. There were stories that people died. No one died. It creates a bad image of South Africa.”

“People are becoming fed up, people who are trying to help. If you criticise them (refugees), you are chased away,” said another.

Earlier this month, the Gift of the Givers charity was told by refugee leaders to stop providing food and medical assistance after its director Badr Kazii made comments that offended them.

Clarifying what he had said, Kazii told 702 presenter John Maytham: “In my view, when I looked at the list of demands, I realised that going to Canada or elsewhere was just not on the cards. No-one had the power to do that.

“If you’re going to have demands that are not realistic it’s not the basis for negotiation.”

He said they had received a “fairly belligerent” statement from refugee leaders refusing the aid, but felt those leaders should be putting the needs of the migrants first.

Balous, who is originally from the Democratic Republic of Congo, is seen as a troublesome figure in the refugee community.

He has worked as a court translator and is said to know well how court systems and bureaucratic processes work.

But he also has several protection orders against him for threats and intimidation. He has also been banned from the Western Cape Refugee and Migrant forum.

Gahlia Brogneri, founder of the Adonis Musati Project for refugee rights, said she was forced to go to the police after threats were made against her and her staff.

“He was harassing our staff. Sending false messages via social media with pictures of my staff members. He accused us of all kinds of horrendous acts … He has the potential to be violent. He stabbed another community leader in the face during one of the forum meetings.”

Brogneri has accused Balous of doing more harm than good in fostering social cohesion between South Africans and migrants.

“In this heightened period of xenophobia he knew people would be anxious, so he sold them something that was not attainable and he knew that because he’s worked in the court system. He knows how the resettlement system works. He knew that many of those people wouldn’t stand a chance because many of them were undocumented.”

But Balous dismisses claims against him. “They are trying to put JP in a problem.”

“I don’t have any cases I’m not a criminal. Because whoever is trying to make cases against me, I don’t attack, I don’t steal … A good leader is willing to be insulted because of the goodness of his people.”

He has, however, apologised for the assault on faith leaders and human rights workers in the church last week.

The group, including Cape Town Anglican Archbishop Thabo Makgoba and Chris Nissen from the South African Human Rights Commission (HRC), was addressing the group about their options of either returning to their home countries, integrating into South African society, or having the UN process their applications on an individual basis.

Makgoba at the time said their frustrations were warranted. “I would describe this as termination anxiety. We were delivering the hard truth. Things they didn’t want to hear. So they expressed some level of anger.”

The HRC — which has been helping mediate between the refugees, the UN and government — said the atmosphere is still tense, with refugee leaders refusing to climb down from their demands.

Nissen said: “The UN will tell them that there needs to be a receiving country. Donald Trump will tell them ‘You are not coming here’. Countries like Canada, and Europe, the number of refugees they are accepting is dwindling.”

Nissen said there are legitimate grievances, such as the slow processing of permits and documents by the department of home affairs, and anti-immigrant sentiment by many South Africans.

“At the heart of it is the relationship between refugees and home affairs. People are complaining of a backlog to get papers. If we can facilitate better communication with all sides it would help. I also used to think that home affairs is just bad, but if you speak to them, they also have challenges,” he said.