The ugly face of Beautiful City

On a small blanket laid on the tarred ground in Village Deep in southern Johannesburg, a man shuffles a deck of cards and shares them with a group of about 10 others. The men have been sitting underneath shade cloth in a disused parking lot across from the premises of the ironically named blanket factory, Beautiful City.

They had been there for a week, one of the men said when the Mail & Guardian visited the industrial area earlier this week. Most of the factories appeared to be deserted.

“There’s another boss who’s a Chinese [person] who told us to wait here because maybe we will see something,” said 32-year-old, Mphatso Phiri*. “We are just like security, we don’t work here.”

Beautiful City was busted and shut down by the Hawks and the department of labour on November 12 for allegedly having violated South African immigration legislation, by-laws and health regulations, and for employing child labour. The company’s sole director, 32-year-old Shih Shen, was arrested during the raid, as were five other Chinese citizens and one Taiwanese citizen.

Employees were made to work in the dark with minimal or no ventilation. The department of labour said workers were not given contracts or information regarding remuneration and they worked excessive hours without being paid overtime.

The workers were required to work in dreadful conditions, earning R6.50 an hour, or R65 a day. They worked 10 hours a day, seven days a week and had no leave. Their wages were three times less than the national minimum wage of R20 an hour.

The National Minimum Wage Act was proclaimed in December 2018 and came into effect from January 1 this year. The failure of the factory owner to comply with the Act over the past 10 months prompted the department of labour to slap him with penalties and a compliance order amounting to R6.3-million.

The department of labour said it would collect the funds on behalf of the employees, 37 of whom are believed to be children under the age of 15. They have been accommodated at an undisclosed place of safety as they are witnesses in the case.

The factory manufactured the inner cotton of blankets using recycled clothing. It was granted an import permit in June from the International Trade Administration Commission (Itac), which is responsible for customs tariff investigations, trade remedies, and import and export control. The permit allows the company to import “new or old rags” from any country to a value not exceeding R450 000. 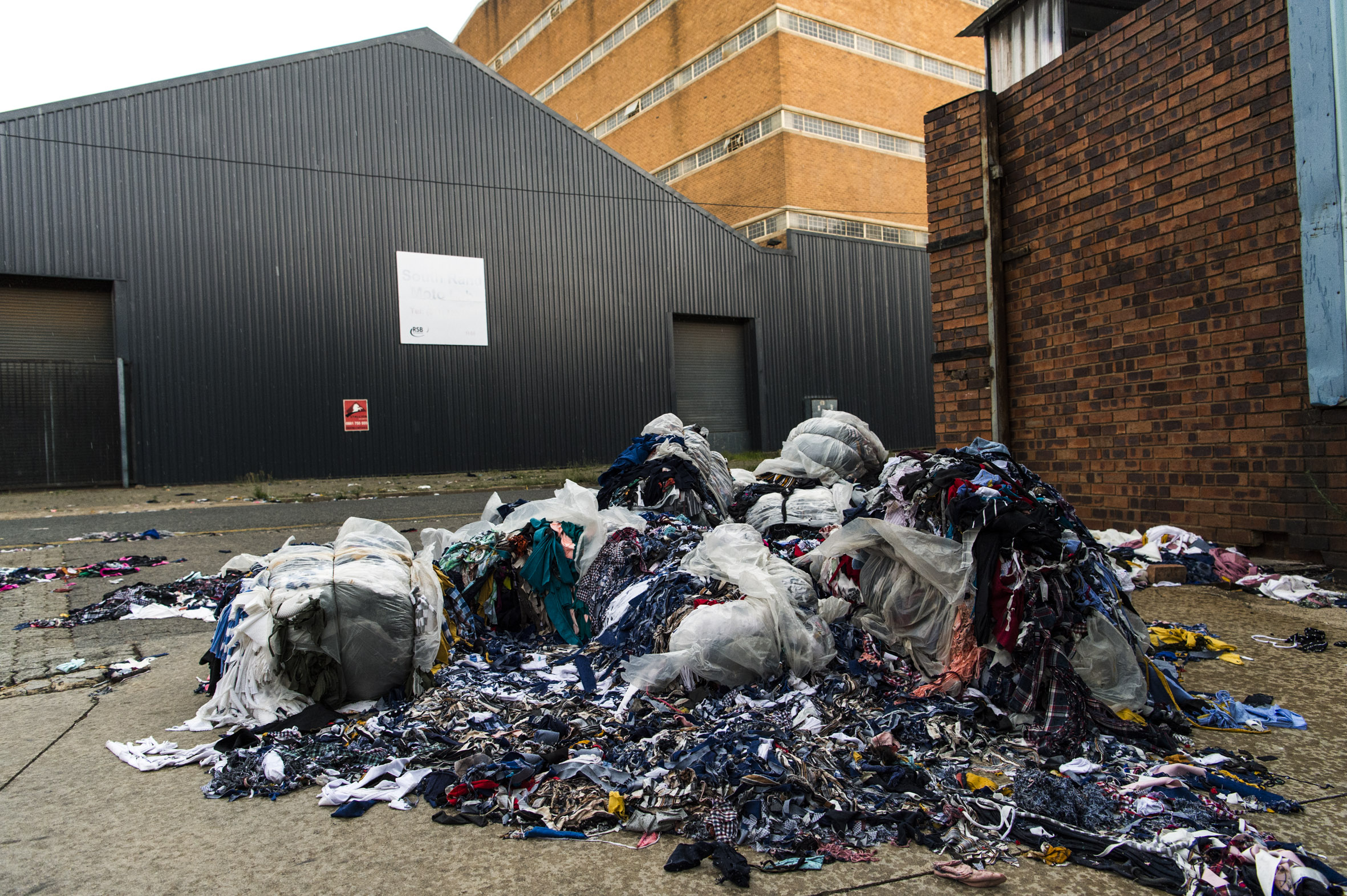 When the M&G arrived at the factory, we found that the rags that were used by the factory when it was still operating were abandoned and stacked up in piles outside the high, steel gates of the business. The gates of the factory had been shut by the department of labour after the raid.

Gauteng’s chief labour inspector, Michael Msiza, said in a statement that information obtained by the department was that the workers were locked in the factory day and night. “When they wanted to buy something they were expected to write it on a piece of paper for their bosses to buy it for them.”

Msiza said that a worker who had managed to escape from the factory alleged that the employers were engaged in the trafficking of Malawian citizens who were found on the premises. He added that, as well as breaching the National Minimum Wage Act, the employer also violated the Occupational Health and Safety Act and Basic Conditions of Employment Act.

“It is alleged that one of the Malawian citizens in this company got injured and his hand was cut off by a machine. Instead of seeking medical help from a recognised public health facility, the Chinese employer brought in a Chinese doctor to the premises and refused to let the injured Malawian … seek medical help,” Msiza said.

The crackdown came after the Hawks received a tip-off from one of the workers, who managed to escape the premises. The victim was one of the 149 undocumented foreign nationals employed by the company. There was one South African employee. Only 78 people — who were found covered in fluff from the fibres they worked with — were on site during the raid: the rest escaped.

Hawks spokesperson Katlego Mogale said the factory has been operating for the past four years. Documents from the Companies and Intellectual Properties Commission (CIPC) show that the factory was, however, first registered only in 2017, with Xiaolong Guo named as its sole director. The change in directorship was enacted in March this year, three months after the South African Revenue Services (Sars) issued the business with a value-added tax (VAT) certificate.

Mogale would not disclose the factory’s turnover but the issuing of the VAT-certificate by Sars this year could indicate that the factory had been generating high revenues over the past year. According to the Sars website, it is compulsory for a business to register for VAT if it is likely to generate an income that exceeds R1-million over a 12-month period. A business generating an income exceeding R50 000 within a 12-month period may voluntarily register for VAT.

Documents from the department of labour describe Shih as a Chinese citizen, and Mogale said the Hawks suspect that Shih, who was in possession of a South African ID book at the time of his arrest, might be falsifying his identity.

Phiri, who was the only one willing to answer questions, albeit anonymously, when the M&G visited the site this week, denied that the factory was engaging in illegal activities, including human trafficking. He claimed he and the others had previously worked at the factory and knew how it worked. On the day of the raid, he was not scheduled to work and, therefore, managed to escape the authorities.

When asked who was paying him and the other men for their services as security guards for the factory, he reluctantly replied, “The big boss.”

Phiri denied children were employed at Beautiful City. “You see this one?” he said, pointing to one of the other men close to him. “He’s short and he looks 14 [years old] but he is actually 23 [years old]. A lot of Malawians look short.”

Phiri said that they had been guarding the premises for a week “just in case someone comes and jumps the gate and steals something”.

He confirmed that the machines that workers would be operating were dangerous and compared the conditions to working in the bush. Phiri said if an injury occurred during working hours and the doctor was unable to come to the factory then he would be the person responsible for taking the injured worker to hospital.

“Those machines are dangerous. It’s the same [as using] a panga or an axe if you are working in the bush. You don’t know if you [will] get injured: you just come to work,” Phiri said.

“They [the injured] would be gone for three weeks or a month. Then they would come back to work.”

The suspects appeared in court on Thursday to apply for bail but the case was postponed to November 28. They remain in custody.

*Not his real name