Crusading for the culture

‘Coloured culture has been hidden. It’s easy to hide. Now that we have these tools at our disposal — the internet and nontraditional media platforms — this is our time to speak. Maybe the world will see us through this instead of having to read a newspaper.” — YoungstaCPT.

3T arrived after the artist had released 30 mixtapes, as well as a handful of EPs and collaborative albums. Unlike his previous work, which focused on highlighting his Kaapse diction and flow, 3T is an autobiographical album that looks to expand the listener’s understanding of the so-called coloured identity in Cape Town and how it intersects with being Muslim in contemporary South Africa.

During an interview with photographer and director Imraan Christian, on the Sold DxB YouTube channel, YoungstaCPT described the songs on 3T as “reporting”. “It’s not like you’re going to listen to my album then come [to my home] and see another thing,” he explained. In addition to being good friends with the rapper, Christian is also the director behind the award-winning YVR.

In dismantling stereotypical ideas about his community, the prolific Capetonian rapper gives as much attention to the bad as he does to the good. In The Cape of Good Hope he raps, “Welcome to the Cape of Good Hope, call it Skolliewood/ Riyadh Roberts robbing from the rich, call him Robin Hood/ Colonialism shook us, we got off to a rocky start/ Now we building empires and calling it Grassy Park/ I’ve never seen democracy, Skaap Kraal to Ottery.” This is juxtaposed with the song’s previous verse, in which he takes the narrative beyond the lens we are accustomed to by paying homage to community greats, those who he says made it out but get overlooked in mainstream media, such as anti-apartheid activist Ashley Kriel, artist Taliep Petersen and comedian Marc Lottering.

The name Jan van Riebeeck provokes feelings of resentment because he was the Dutch coloniser whose 1652 expedition led to the colonisation of the Cape. In an effort to defy the weight carried by his name, YoungstaCPT refers to himself as a “Young Van Riebeek” using his aggressive determination to challenge the marginality and discrimination dealt to coloured folks. In addition to labelling himself as “the Cape crusader” YVR has YoungstaCPT throwing in lines like: “A lot of mense is hating, that’s not stopping me/ This was the same thing that they did in the Cape colony.”

To accompany this lyrical declaration, the YVR music video is set in an alternative 1652. Here Jan van Riebeeck’s plans to colonise the Cape are upset by slaves who kill him shortly after his arrival. 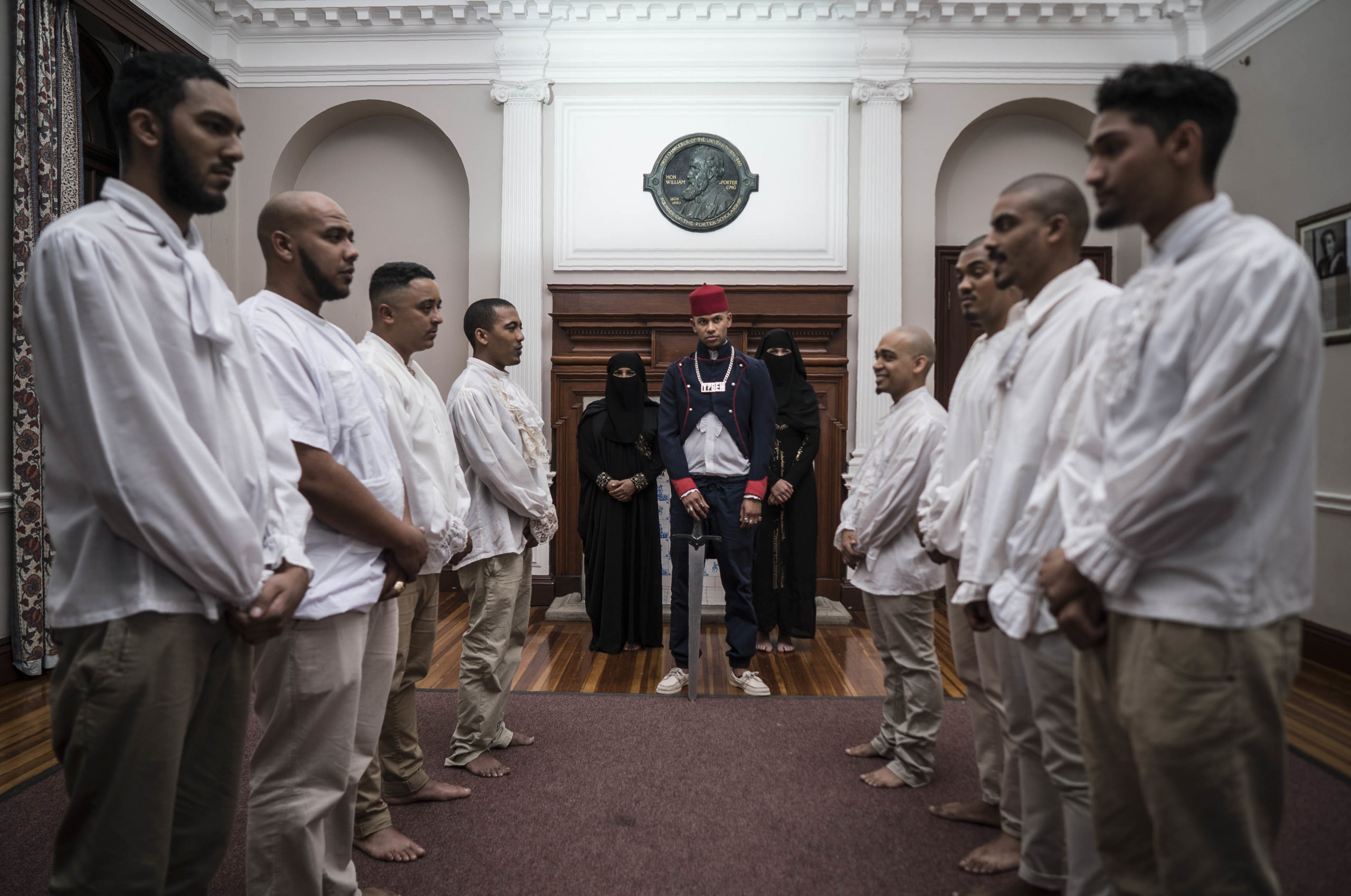 Reimagining the past: YVR is set in an alternative 1652, in which Jan van Riebeeck’s plans to colonise the Cape are upset by slaves who kill him shortly after his arrival. (Imraan Christian)

Visually, YVR is a marriage between the skills of two friends. Christian’s aesthetic background is a medley between conceptual street photography and protest photography. So far, YoungstaCPT’s music videos have either been visual essays depicting the places he grew up in or standard hip-hop music videos shot in a studio against a white backdrop. The result of bringing their visual styles together is a music video that reads like a short film, with a clear cast, setting, plot, conflict and resolution.

“It’s been revolutionary connecting and working with Youngsta this year,” said Christian in an Instagram post shortly after the video’s release. “YVR is a special piece to all involved, and tells the story of the reclaiming of what has always been ours.”

In this alternative history, YoungstaCPT is centred as the protagonist who delivers his people from slavery and second-hand citizenship. As well as the words to the song, the lyricist and the video’s extras wear colonial or royal garb in a bid to visualise their triumph over white superiority.

Using a Western cue such as the settlers’ garb to visualise a victory is validated by the decision to re­imagine it. Instead of a tricorn hat, YoungstaCPT wears a fez and accessorises the rest of his outfit with a gold watch and his signature Y?Gen gold chain. Instead of the petticoat, gown and cap, the women in YVR wear niqabs and abayas. 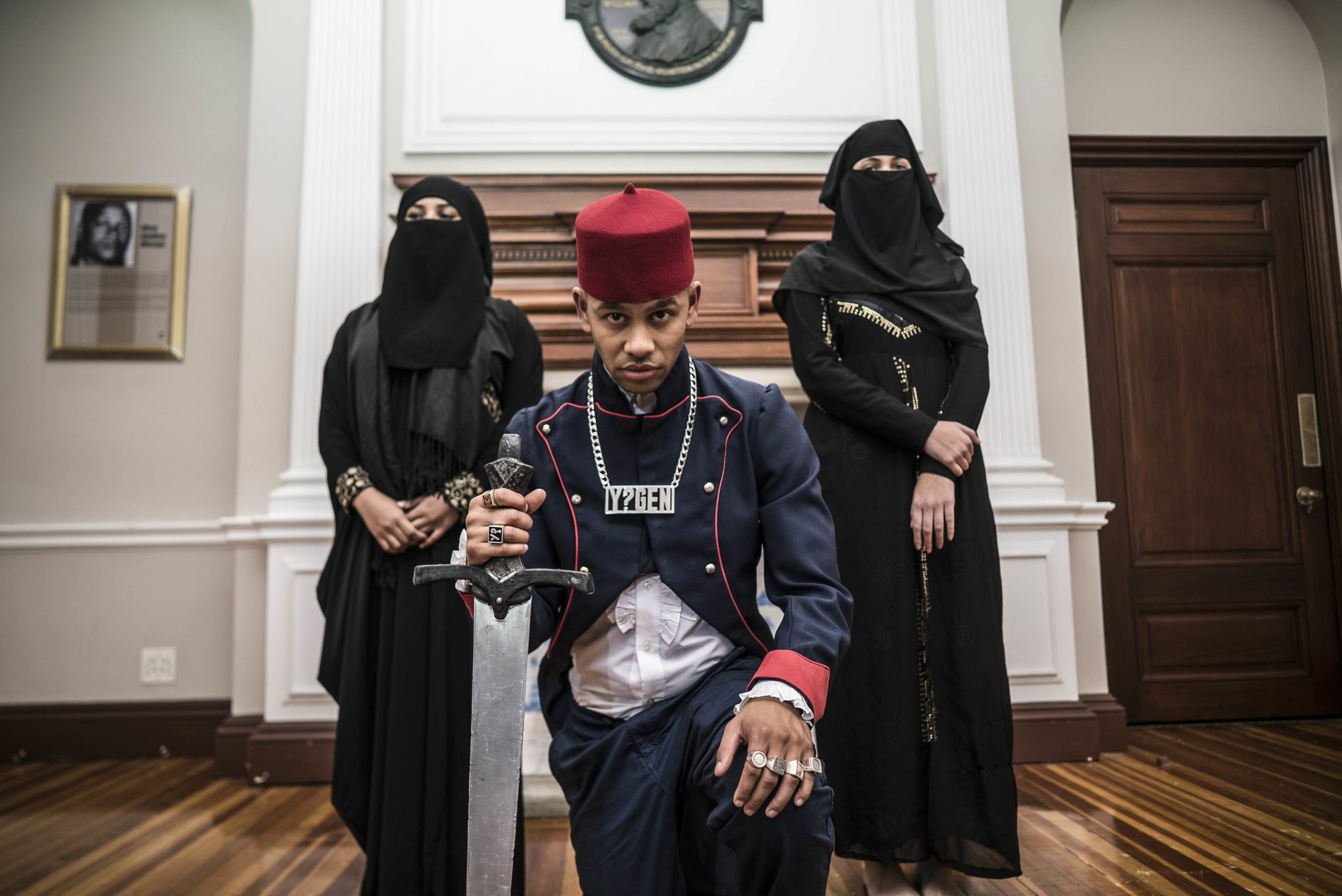 The video’s cast reimagines colonial garb as a visual symbol of their triumph over white superiority. (Imraan Christian)

Speaking about the ability to capture their heritage through music and visuals during the YouTube insert mentioned earlier, YoungstaCPT says, “We can still go capture a music video about Islam because there are so many areas that are practising it in the same way.”

The pressure to conform to Western ideals isn’t a factor because their community has helped to build a strong sense of self in the way they talk, eat, dress and live among each other. It is for this reason that YoungstaCPT isn’t alone on his mission to subvert stereotypes and celebrate the community through pop culture.

As well as filmmaker and photographer Christian, other people doing this work are the founder of Sneaker Cartel, Rolo Rozay; Zaid Osman, the man behind Sneaker Exchange; and Puma Sportstyle marketing manager Hayden Manuel. One of the ways they have conveyed their message is through Just Dala: Meet the Bubble Heads of Cape Town. Directed by Christian with the contribution of the creatives and entrepreneurs mentioned above, the documentary explores and celebrates sneaker culture in the Cape Flats.

Beyond addressing the need for varied and nuanced representations, there’s a lesson that local rappers and pop culture content creators can take from YoungstaCPT and his fellow crusaders: at no point during their efforts to document and reclaim their experiences do they invalidate other ways of being African.