Twitter dubbed it “the Legal Derby”: two of South Africa’s favourite advocates, Dali Mpofu SC and Tembeka Ngcukaitobi, who are usually on the same side in the big political cases, but this time arguing on opposite sides.

It’s a cute analogy, although there are immediate problems with it. For one thing both would insist on being Kaizer Chiefs (because, clearly, legal acumen does not equate to good football choices).

More fundamentally, unlike in football where almost everything depends on the talent, form and skill of the players, and on the coach, court cases are almost always decided on the facts and the law. It is rare for counsel, no matter how excellent, to turn a bad case into a winning one.

Still, there is, like in football, a certain amount of strategy involved — evident in this case by which aspects of the dispute Mpofu and Ngcukaitobi chose to emphasise in their oral arguments.

The case was a fight between public protector Busisiwe Mkhwebane and her former chief operating officer, Basani Baloyi, who says she was axed from her job because she stood up to Mkhwebane’s abuse of power. She wants the court to order her reinstatement and to declare that the public protector breached her constitutional duty to act without fear, favour or prejudice.

Ngcukaitobi — for Baloyi — dwelt heavily on the merits of the case. The former chief operating officer, who was “very close to the facts”, alleged that Mkhwebane had selectively prioritised certain investigations and reports —in particular those involving President Cyril Ramaphosa, Public Enterprises Minister Pravin Gordhan and Robert McBride, the former head of the Independent Police Investigative Directorate.

Not only were these cases prioritised ahead of others, but when Baloyi raised a concern aboutwhy the sources of the donations to Ramaphosa’s CR17 campaign to be ANC president were being investigated, and not those of Nkosazana Dlamini-Zuma’s campaign, she and another staff member were sidelined and “external people” were brought in for the investigation.

Ngcukaitobi repeated what Baloyi said in her founding affidavit: “This caused suspicion within staff members. ”Worse, Mkhwebane had “aided and abetted” the unlawful conduct of her chief executive, Vussy Mahlangu, he said.

When Baloyi tried to stand up to the abuse, she was purged, said Ngcukaitobi. This is what this case is, at its heart, all about, he argued.

And when “very serious” allegations were raised in court papers with the public protector, they were not answered, said Ngcukaitobi.

Mkhwebane had said there was nothing unusual about the decision to reduce the internal CR17/Bosasa team substantially. This, she said, was “due to the high-profile and sensitive nature of an investigation involving the head of state”. One of the donors to the CR17 campaign was Gavin Watson, the chief executive of the allegedly corruption-tainted Bosasa.

But, said Ngcukaitobi, there was, for example, no answer “at all” as to why Mkhwebane had brought in “external people” and who these people were. “The public protector is a public functionary holding immense public power. She must explain, when there are allegations of selective targeting and selective prioritisation, why certain decisions have been made.”

Play of the Day

Play of the Day would have gone to Ngcukaitobi’s argument about the WhatsApp message that Mkhwebane had sent to Baloyi about playing “a chess game” —using Mkhwebane’s own explanation for the message to make her look even worse.

The WhatsApp said: “COO [chief operating officer], I worked with few people to deal with the sabotage of the PG [Pravin Gordhan] camp …It is not about you but one has to play the chess.”

In her answering affidavit, Mkhwebane had explained what she meant: “My reference to chess was obviously in respect of our defensive moves to counteract the sabotage and unwarranted attacks directed at the office of the public protector. If there was any alleged ‘game’ it was initiated by our assailants…”

But, said Ngcukaitobi, this answer calls Gordhan “an assailant”, and describes him as someone who has sabotaged her office. Mkhwebane, with no evidence to back it up, says Gordhan had, at the time of the investigation, accused the public protector of corruption and being part of state capture. “The inevitable inference that your ladyship is left with, is that this is retaliation. One can never have a public protector who retaliates. One can never have a public protector who says ‘I am justified in playing a chess game against you as retaliation’.

“You do not play a chess game with public power,” said Ngcukaitobi, and the crowd went wild.

Mpofu, on the other hand, came down hard on whether the high court had jurisdiction to hear Baloyi’s case, which “in essence” was a labour dispute about what had happened at the end of Baloyi’s probation period as the chief operating officer.

The jurisdiction question may be more of a law point, and not as sexy as Ngcukaitobi’s arguments, but if Mpofu persuades the court on this, that would be the end of Baloyi’s case before the high court. 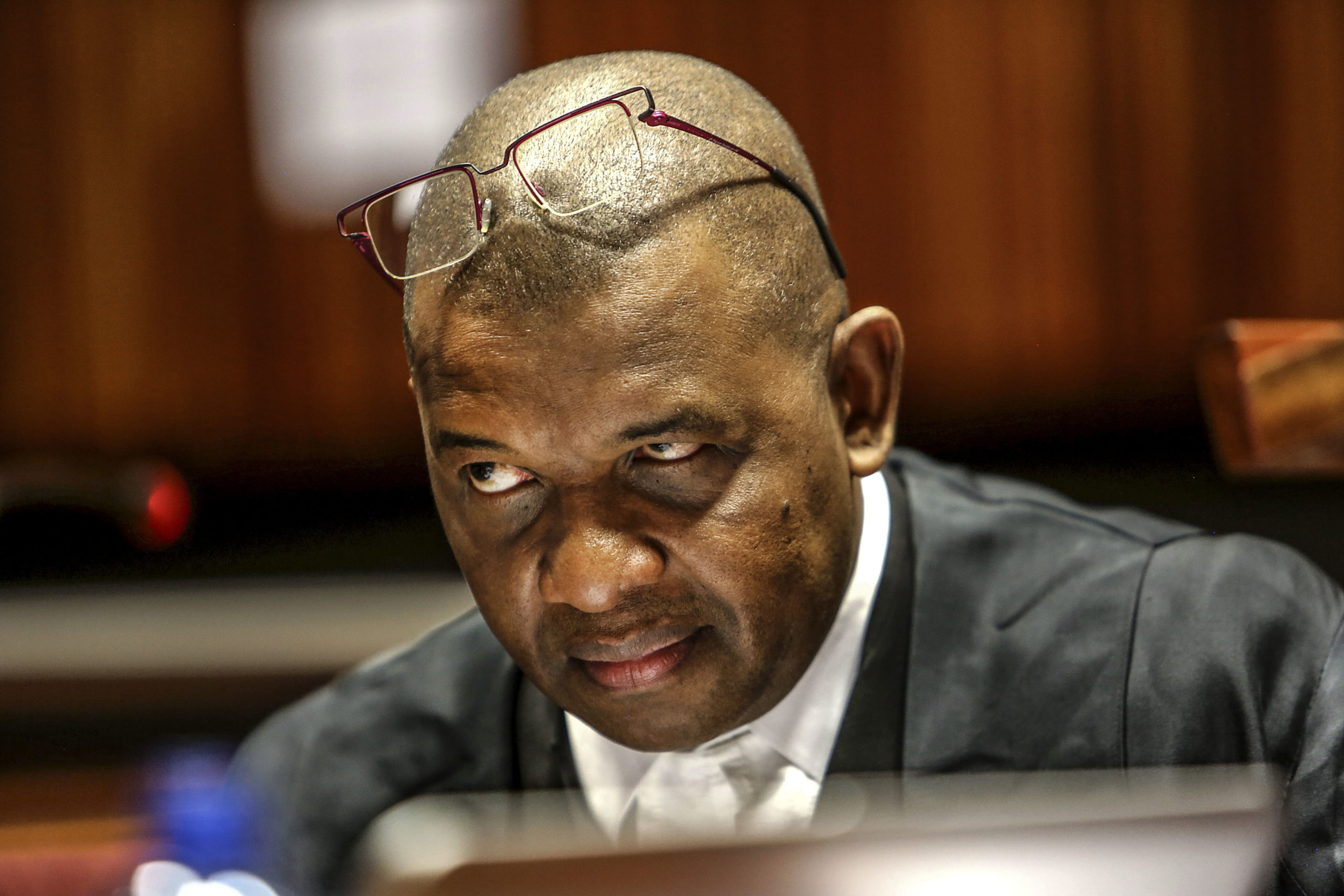 Dali Mpofu SC argues that the case is a labour dispute and should be heard in the labour court and not the high court. (Alon Skuy/Gallo Images/The Times)

All the “tales and stories” about Gordhan and Ramaphosa and McBride were all very interesting, but had nothing to do with the real dispute, Mpofu said. This case was, at its heart, about whether the public protector had committed an unfair labour practice in how she dealt with Baloyi’s probation. And unfair labour practices fell exclusively within the jurisdiction of the labour courts, he argued.

“The case is about probation, and about whether the probation was impliedly extended or whether her employment was confirmed by operation of law,” said Mpofu.

He said the Constitutional Court had decided that a judge must “interpret the pleadings and then characterise the case” — to find the “essence” of the dispute on a proper interpretation of the pleadings and not just by looking at the words used by the applicant.

“It doesn’t help to clothe it in all sorts of clever language and try to make it what it is not … If you take a pig and give it lipstick and all sorts of things, it will still run to the dam.”

Ngcukaitobi had argued that this case was one of concurrent jurisdiction, allowing Baloyi to make a choice as to which forum to go to, but Mpofu said there was a sound administration of justice rationale for being strict about jurisdiction —to avoid litigants “forum shopping”.

If this was a football match, a definite topic for discussion during half time was that the judge heard argument on the whole case, and did not decide whether the case was truly urgent before hearing the rest of it, as is often done in urgent cases.

Urgency was one of the weaker points in Baloyi’s case. As Mpofu said: “It is common cause that the allegations that are made about Nkwinti, Gordhan, McBride and all these people, on her version, happened in about April, May of this year … And here we are now on the verge of December … You [Baloyi] allow all these bad, bad things to happen in front of your eyes, April, May, June, July, August, September, October. And then some time on the 7th of November, it’s urgent. The court must stop everything, all other litigants must wait.”

In theory Judge Mmonoa Teffo could still dismiss the case on urgency. But, after hearing a whole day of argument, it is unlikely. Mind you, the judge was giving nothing away. She asked very few questions and maintained an impenetrable poker face.

But even if Baloyi loses the case, the damage has perhaps already been done. Her allegations, from someone on the inside of the office of the public protector, shore up the view that Mkhwebane is pursuing an agenda outside of her constitutional mandate. These allegations are another block in a case that is slowly collecting against Mkhwebane — that she is not fit and proper for her job.

In this way this case could be less like a Pirates versus Chiefs derby and more like that match between Maritzburg United and Black Leopards, which, because of points and goal difference, could decide whether Chiefs or Pirates wins the league.