An old, two-plate stove, covered in dried-up mielie pap, is the first object you see as you enter the “staff kitchen” at Jiebo Home Trading in Industria, west of Johannesburg. From the fire-charred walls to the gravy-stained floors, the place is airless and filthy.

Fruit flies hover around the toilet seat of the unisex bathrooms next to the kitchen. There is no water and workers have to fill a bucket with water from the adjacent kitchen to flush the toilets.

Five aluminium pots sit on the stove. They are used by the more than 30 Malawian workers to prepare their daily meals. A 10kg packet of Ace Super maize meal and a one-litre bottle of cooking oil are on hand.

“They don’t let us go out for lunch so we make pap every day,” says Ibrahim Mohammed, who gave the Mail & Guardian a tour of the blanket factory where he has worked, together with other Malawian migrants, for the past two years.

Mohammed’s workstation, a few steps away from the kitchen and the bathroom, is where he sews the edges of blankets for at least 10 hours a day, seven days a week. He uses an old Kingstar machine. On a good day, he can produce up to 20 blankets, earning a maximum of R100.

He has been employed at the factory for nearly two years. He manages to send back at least R200 a week to his family of four back home. The rest he uses for transport, food and to rent a room in a flat in Jeppestown that he shares with three other men. A woman sitting nearby, whose job is to fold the blankets, says she earned R50 a day. 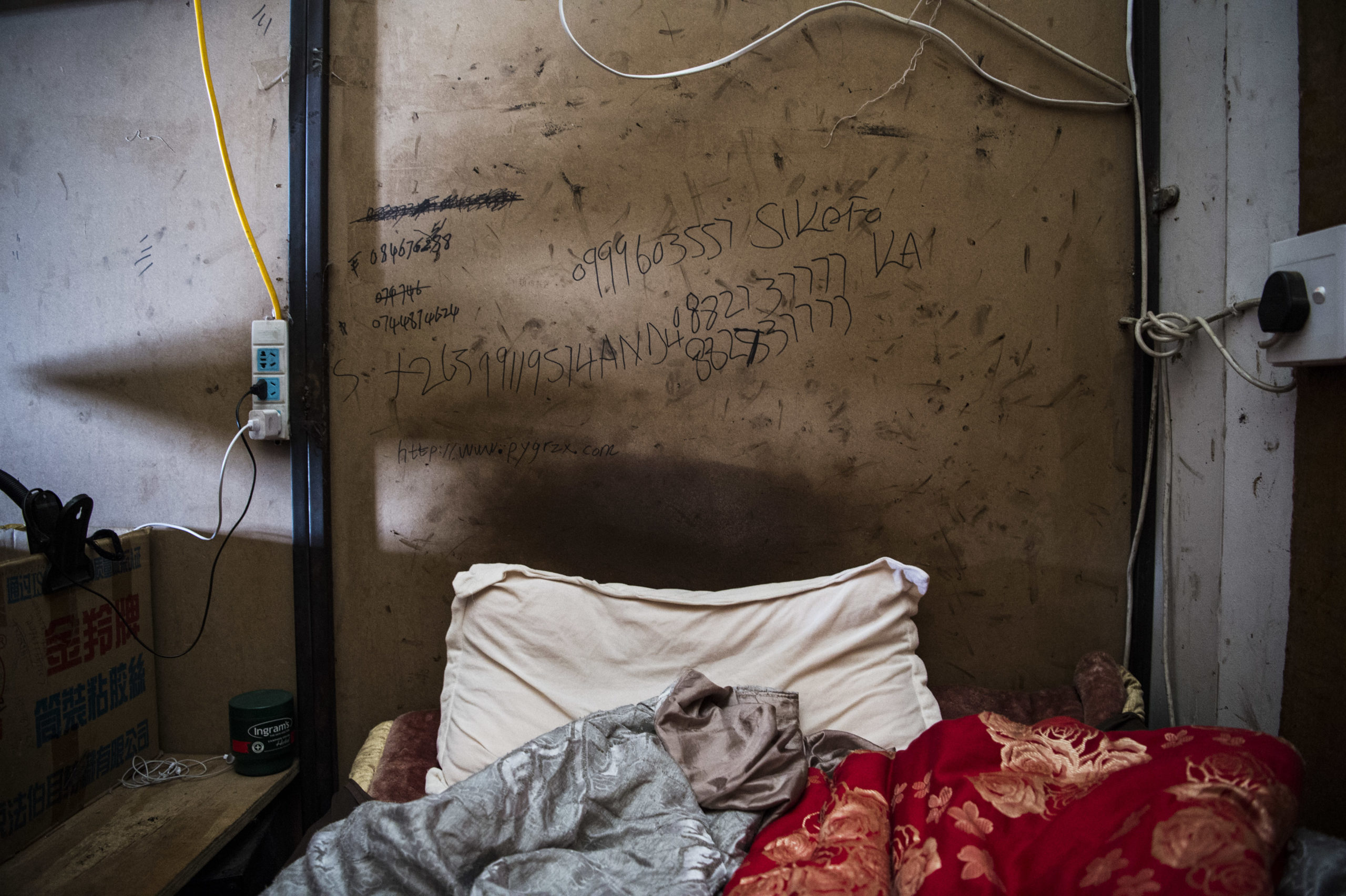 A stack of discarded Jiebo Home Trading posters, titled “Luxury Comforter Set” surround Mohammed’s workstation. The words “Made in China” are also boldly written in the top-right corner of the poster, together with images of the various types of blankets the factory produces.

Mohammed, who is 34 years old, arrived in South Africa after failing to secure employment in Lilongwe, where he was born. “In Malawi, there is too much suffering so I could only come [to South Africa],” he says.

Many Malawians make the journey to South Africa by bus, but Mohammed travelled in a small pick-up truck with eight passengers: two in the front and six at the back. He was one of the people in the back who slept, ate and chatted on one mattress for the duration of the 25-hour-long trip. It cost R750, a bargain compared to the R1 500 bus fare.

On Wednesday, Jiebo Home Trading was one of two businesses bust by the Hawks, the department of labour and the department of home affairs. The operation was aimed at cracking down on factories that have failed to comply with labour legislation. Human trafficking was also suspected, but none was found in this case. 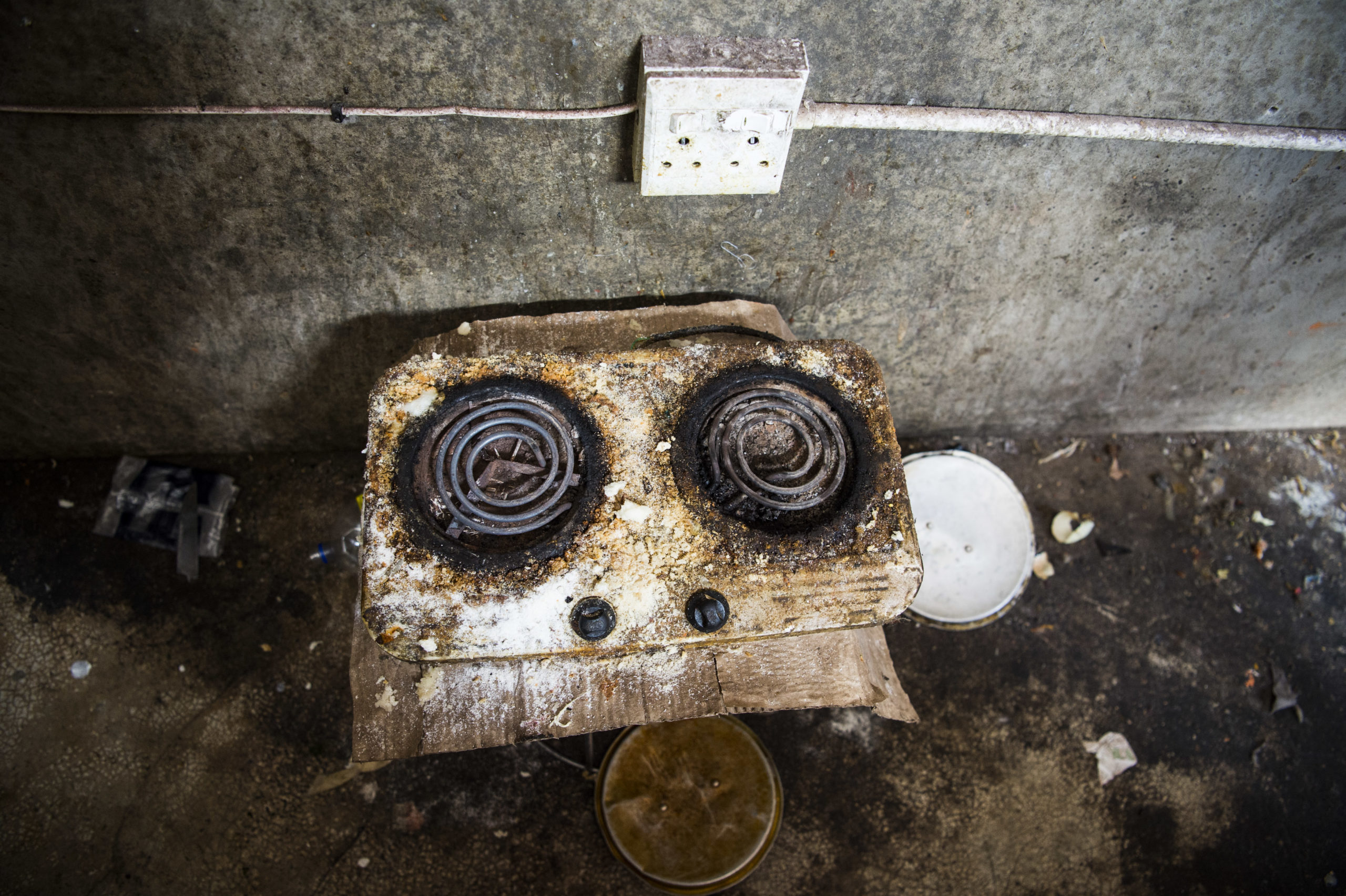 An old, two-plate stove on which the workers cook their food. This stove is used by the more than 30 Malawian workers to prepare their daily meals. (Delwyn Verasamy)

The authorities found that Jiebo was not complying with safety standards. “There is no ventilation, chemicals and dust everywhere and basic housekeeping rules were not adhered to,” says labour department deputy director-general in charge of inspection and enforcement, Aggy Moiloa.

In addition to not adhering to the Occupational Health and Safety Act and Basic Conditions of Employment Act, Jiebo was also found to have not complied with the National Minimum Wage Act, which was implemented in January.

Moiloa says that when the authorities first entered the building, they found some workers hiding underneath stacks of finished and unfinished blankets on the premises.

Documents from the Companies and Intellectual Properties Commission (CIPC) show the company was first registered in 2009, with Chinese citizen Jie Zhang listed as its sole director.

Zhang was not on the premises when the raid happened, but workers tell journalists that she usually does not come to the factory but manages a store at the Dragon City Wholesale Mall in Fordsburg where the blankets are sold.

The department of labour closed down the factory following the raid. Most of the workers, including Mohammed, were found to not have work permits, and were taken to the Langlaagte police station, pending their deportation.

Jiebo is the third factory in Gauteng raided by authorities this month. Another factory in the same area as Jiebo was also raided on Wednesday and a similar operation was conducted two weeks ago at the Beautiful City factory in Village Deep, Johannesburg.

Four men and three women were arrested in the operation after the authorities found that they had failed to comply with various labour laws, including subjecting workers to forced labour and trafficking illegal migrants. The seven have not been formally charged and remain in custody.

The suspects remain in custody. Their legal representative, advocate Jannie Kruger, requested a postponement to the December 11 because of new information that he would like to present to the court, he told the Mail & Guardian.

The 78 undocumented Malawian workers who were found on the Beautiful City premises at the time of the raid were taken to a place of safety, while the rest escaped. Hawks spokesperson Katlego Mogale says those who have been rescued from the factory will now be state witness in the case.

“Should a need arise for them to testify as the case unfolds, the courts will issue subpoenas in that regard,” she said.

Following the crackdown, the Chinese embassy in South Africa accused the labour department of “raising criticisms” on social media towards Chinese businessmen and the wider Chinese community.

The first press statement by department of the labour, released on November 14, stated that a “Chinese factory” was bust in a joint operation following a tip-off. A second media statement, with the headline “Seven Chinese and Taiwanese nationals busted for alleged human trafficking and violation of labour laws remanded in custody,” was released on November 21 after the suspects appeared in court.

The embassy has accused the labour department of failing to verify the nationalities of two parties involved in the factory: the owner, Shih Shen, who has a South African ID that was found in his possession during the raid, and another suspect, Kevin Tsao, who is also a South African citizen.

The embassy says the press statements by the department of labour make no mention that the two parties, Shih and Tsao, are South African citizens.

In a letter seen by the M&G, sent to both the department of labour and the department of international relations and co-operation, the Chinese embassy accused the labour department of releasing unverified information to the public, including the nationalities of the suspects arrested at Beautiful City.

The Chinese embassy has asked that the department of labour delete the two media statements about the raid to “eliminate negative influence on social media caused by fake news”.

The embassy objected to the second press statement, which it says implies that Taiwan is a nation, “a severe violation of the One-China Principle, which is enshrined and established in the UN Resolution 2758 and universally recognised.”

The recognition of Taiwan as a province of China and not as a separate country became the basis of the establishment of China-South Africa diplomatic relations in 1998 when President Nelson Mandela officially recognised the People’s Republic of China.

The press statements by the department of labour have not been retracted. Moiloa met a delegation from the Chinese embassy on Wednesday morning to discuss the matter. She confirmed to the M&G that discussions with the Chinese are at a “sensitive stage.”