For a 14-year-old who has committed a crime and is behind bars, being a pilot one day and an astronaut or a marine biologist the next is a far-fetched dream. But thousands of children land up behind bars every year — for crimes ranging from murder to assault and theft — and the education system has to give them the tools to realise their dreams.

But the system often fails these future scientists, who are called “children who are in conflict with the law”.

For children, who need consistency to thrive at school, this division of departments and responsibilities means they find it difficult to receive that consistency.

The Mail & Guardian visited the Soshanguve Secure Care Centre in Gauteng to speak to some of these children.

READ MORE: Through the eyes of a child convict

At that point, Lungelo* had been at the centre for more than a year, after she was caught stealing from her grandmother. This was not the first time. Lungelo, who has short hair and feisty eyes, explains that, when she was arrested, she was heartbroken.

“I had disappointed my family and I knew I had done something wrong that I could not get away from. My mother was so disappointed that I went to such lengths to get nice things,” she said.

The now 18-year-old was sentenced in August last year.

Because Lungelo was sentenced when she was a minor, she will serve out the rest of her sentence at the facility, which caters for children between 14 and 18 years old.

“It’s painful being here. There’s not much to do,” Lungelo said.

After her arrest, she was placed at the Walter Sisulu Child and Youth Care Centre to await her trial. While she was there, Lungelo wrote her grade eight exams and passed. “But then I had to stop. Just like that.”

Lungelo spent close to a year without education while serving her sentence at the Soshanguve centre, which houses about 70 children. The social development department did not respond to questions regarding the education system used in secure centres.

That problem has now been fixed for education at that centre. Lungelo wants to be a lawyer or a pilot one day.

But the wider problem persists. The M&G understands that the curriculum and exam papers for the students are provided by the department of basic education.

How children then receive education varies. In one case, a child who was recently detained at the centre while writing his high school exams was able to continue with them after the centre got in contact with his school.

The head of the Soshanguve centre, Patricia Ramere, said that when the children arrive at the centre from police stations, or after being sentenced, they have been treated as criminals — but she tries to change that.

One of the children in her centre, Michael*, was awaiting trial and said he has big dreams for his life and wants to be either a marine biologist or a cricket coach.

The 14-year-old has been in the “system” for the past four years. First, he was moved from one secure home to the next because his father had lost his job and had turned to drugs. He named a handful of places he has had to call home, including the Don Mattera children’s home and the Walter Sisulu Child and Youth Care Centre.

This was all before he was charged with alleged theft.

When Michael talked about his career dreams, he lit up — the only time during the interview that he did so. He smiled and used his hands to explain how the national cricket team has been battling to gather momentum.

Mthetho Mqonci, a senior official at the department of social development, explained to the M&G that the centre has faced a few challenges, including a court case compelling the department to provide education for the children.

“We have a lot of centres where there are teachers and we offer education as a programme. For example, you go to the Western Cape: social development has appointed teachers on its own. It’s not as if in all 31 care centres there is no education,” he said, referring to the period during which the centre did not offer formal education.

Mqonci was quick to point out that the Soshanguve centre has been open for only four years. He explained that the departments of education and social development have had numerous discussions about the need for educational facilities.

“The reason there was no education in this [Soshanguve] facility is that it is in the same area as a children’s home. Children from that home have always been transported by buses to community schools near the facility. Hence there was no evident need to have teachers in the facilities.

“When we started with this facility there was some back and forth with the department of education and social development about opening a new school here. Education was arguing that they had been operating here for many years so why do we need a school inside the building when there are schools we have been utilising in the past.

“So we had to now explain that they [the children] cannot be moving out when we don’t have the resources and the expertise to do that,” said Mqonci.

This problem of departments not communicating properly — and children missing out on schooling — is one of the reasons Tarryn Cooper-Bell a lawyer with the Equal Education Law Centre, conducted research into children in conflict with the law — and how they are educated. It is one of very few pieces of extensive research in the field.

Although the study, released last year, focused on the Western Cape, its findings can be extrapolated to reflect the situation in the rest of the country.

Cooper-Bell told the M&G: “Many of these children fall through the cracks. And why I say this is that in all of the centres we visited, education was compulsory. It was very clear that these centres identified the importance of education in rehabilitating the learners and these children.” 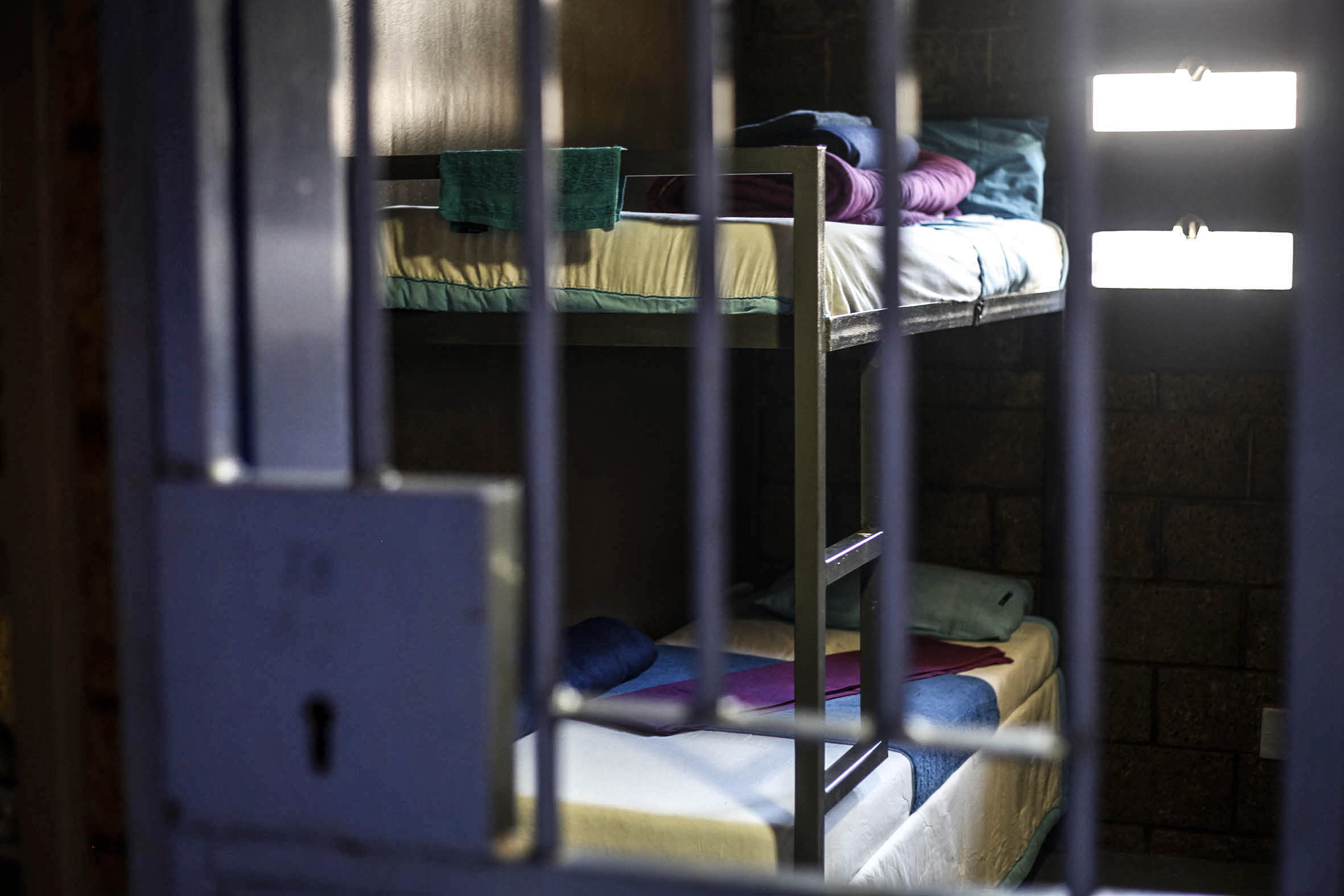 A bedroom behind bars at the Soshanguve Secure Care Centre. (Hiram Alejandro Durán)

The problem, the study found, was that children are released and then they are in the domain of another department.

“The majority of the time the children don’t end up going back to school, and then obviously fall back into the cycle of violence,” she said.

The study also found that when children arrive at these centres there is usually quite a big learning gap, as some of them have been part of gangs or have been neglected. The report said that at the Horizon Child and Youth Care Centre, in Clanwilliam in the Western Cape, on entry each child is assessed by a social worker, who draws up both a care plan and an individual development plan.

All sorts of problems are picked up at this point. The study found that, “A challenge experienced by the centre is that, upon admission to the centre, most of the learners have been out of school for extended periods of time. It is, therefore, difficult to get the learners into a school routine and difficult to change their mindsets with regards to education.”

Cooper-Bell and her team visited many other centres, finding inconsistencies — but also innovation — in how they work. At the Vredelus Secure Care Centre in Elsies River, for example, students get points for attendance. At the end of each month, these can be converted to purchase sweets, chips or help them qualify for a holiday.

As well as the inconsistency in education, Cooper-Bell found that there does not seem to be a safety net in place for these children when they are released.

“The departments need to speak to each other. There [are] social development or correctional services, education and justice, who need to speak to each other to ensure these kids don’t fall through the cracks. This is especially in light of these children being such vulnerable individuals. Education is so important for the rehabilitation of these centres and to get them out of that cycle,” she said.

Despite the failings of the system in numerous cases, there are some success stories. 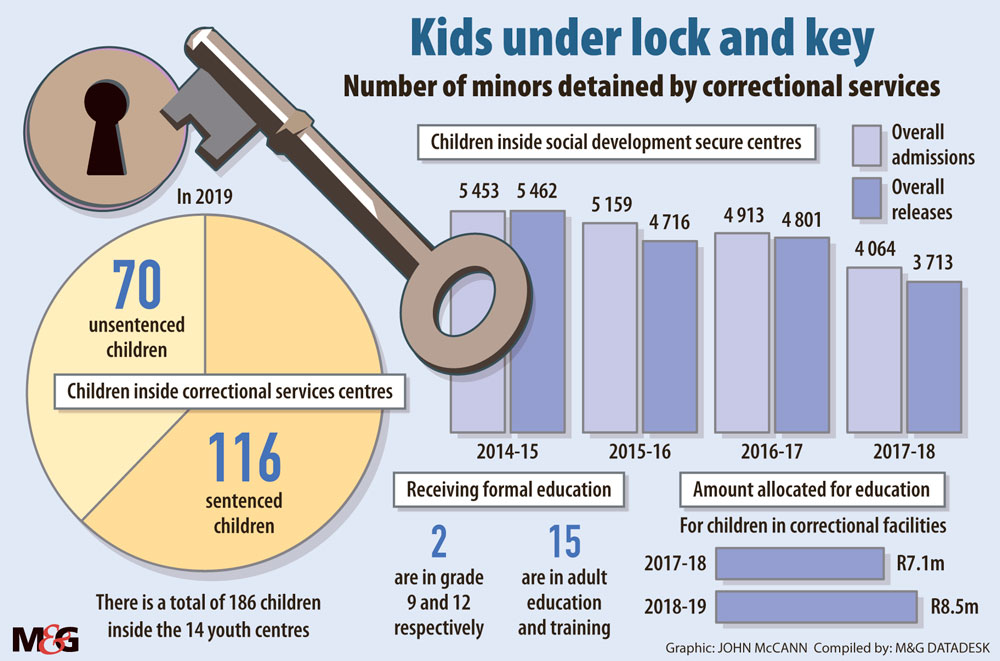 Ntando* was incarcerated for five years for numerous cases of theft from his small town in the Northern Cape.

While serving his time at the De Aar Child and Youth Care Centre, he joined a mainstream school at which he completed grade 10.

He told the M&G: “I got my NQF level 4 there. We studied Maths literacy, English and other subjects like ordinary kids. Back at the centre we made furniture; [we] were taught computer literacy and woodwork. I enjoyed school and excelled.”

“I want to give back to my community by teaching other children who are in the same situation as I was that it’s not okay. They have a bigger purpose in this life.”

* Pseudonyms have been used to protect the children’s identities.

This story has been produced in collaboration with the IsuElihle project, which was launched in 2016 by Media Monitoring Africa to focus on reporting on children by funding reporting on that topic