Performance in critical subjects is declining and the number of passes at 30% is a sign of the shortage of quality education. Individual stories of achievement should not distract us from this systemic issue

This year’s matric pass rate surpassed the 80% mark for the first time in democratic South Africa. This achievement by the half a million learners who wrote the exams is, however, tempered by a decline in enrollment for what are traditionally seen as harder subjects to obtain passes in, such as mathematics and accounting.

The 2019 results bear this out. There has been a decline in enrollment in most of the critical subjects, but the biggest decline between 2018 and 2019 has been recorded in mathematics, with 14 178 fewer learners taking the subject. Accounting saw a drop of 12 972 learners, with English first additional language recording a decrease of 9 887 learners.

The decline in these subjects has been steady since 2015. Of the 11 subjects deemed as “critical” for learners to go on to study at university and other institutions of higher education, only history has seen a significant increase — of 11 674 learners.

And, accompanying the decline in enrollment in these subjects, is a decrease in the number of learners passing them. In some, the majority of the learners are passing at the 30% level (achieving between 30% and 39%).

This trend holds true even for provinces that spent millions on interventions for learners, particularly in grade 12, in these critical subjects. The Mail & Guardian reported in September that since 2007 the Limpopo department of education has spent about R138-million on these camps, and in his budget speech last year Eastern Cape MEC for education Fundile Gade said his department had set aside R854-million for matric camps and weekend classes for grade 12 learners.

The 2019 National Senior Certificate examination report, released on Wednesday, said the biggest support programme offered to the class of 2019 was through holiday school programmes (matric camps). According to the report, the holiday classes were accessed by about 40% of the class of 2019. The 2019 cohort received between 15 to 20 additional days of tuition, on average.

However, for vice-dean of teaching and learning at the University of Johannesburg (UJ) faculty of education, Professor Nadine Petersen, as long as the country views matric as a “sprint” instead of a “long-distance [race]” it does not matter how many interventions are put in place: they are not going to produce the desired results.

Petersen said matric should be looked at as a three-year journey that begins in grade 10. “If children have not mastered what is required in grade 10 and are slipping through grade 11 and going to grade 12 with huge gaps and if their attitude is not right in grade 12 … how can they possibly expect to succeed with a few months’ work?” she said.

Petersen said the quality of the passes can also be attributed to whether the teachers are teaching the subjects they know best. “When resources are scarce, we put any teacher into a position and expect them to do well … That kind of thing has repercussions. If you don’t have the resources, you use anyone that you have, but I do not think we are thinking about the long-term consequences thereof.”

But Petersen also acknowledged that there are teachers who work hard and complete the curriculum on time; however, if the learners themselves are not putting in the effort, then whatever interventions are made by the provincial departments are a waste of time and money.

She said learners also need to shoulder the responsibility and blame cannot be ascribed only to teachers and the department.

The decline in enrollment for mathematics is perceived by educators as particularly worrying. There has been a decline in the number of learners achieving passes, down from 58% in 2018 to 54.6% last year, and very few distinctions. In 2017, 2.7% of learners writing mathematics achieved distinctions, which declined to 2.5% the following year and dropped to 2% last year.

Last Friday, the Council for Quality Assurance in General and Further Education and Training (Umalusi) called for research to be conducted to explain why there is a decline in achievement in the subject.

But Professor Nicky Roberts, a research fellow at University of Johannesburg who focuses on mathematics education, said it is “dangerous” to describe the mathematics performance as declining. She said the subject is not making inroads but it is not going backward. “In my view mathematics is an incredibly difficult subject to get right [when] the focus is solely on matric.”

She said the problems in mathematics begin in primary school and are then compounded, and that focusing on improved teaching and learning in matric, or even in grades 10 and 11, is too late. “There are serious problems in senior phase, and these stem from primary school. We need systemic results at grade three, six, and 9 to identify schools (both primary and secondary) that need support and additional government investment.”

She also said mathematics is a conceptual subject and its development needs to take place alongside language development. This means that learners’ home language and English must be prioritised, together with mathematics. 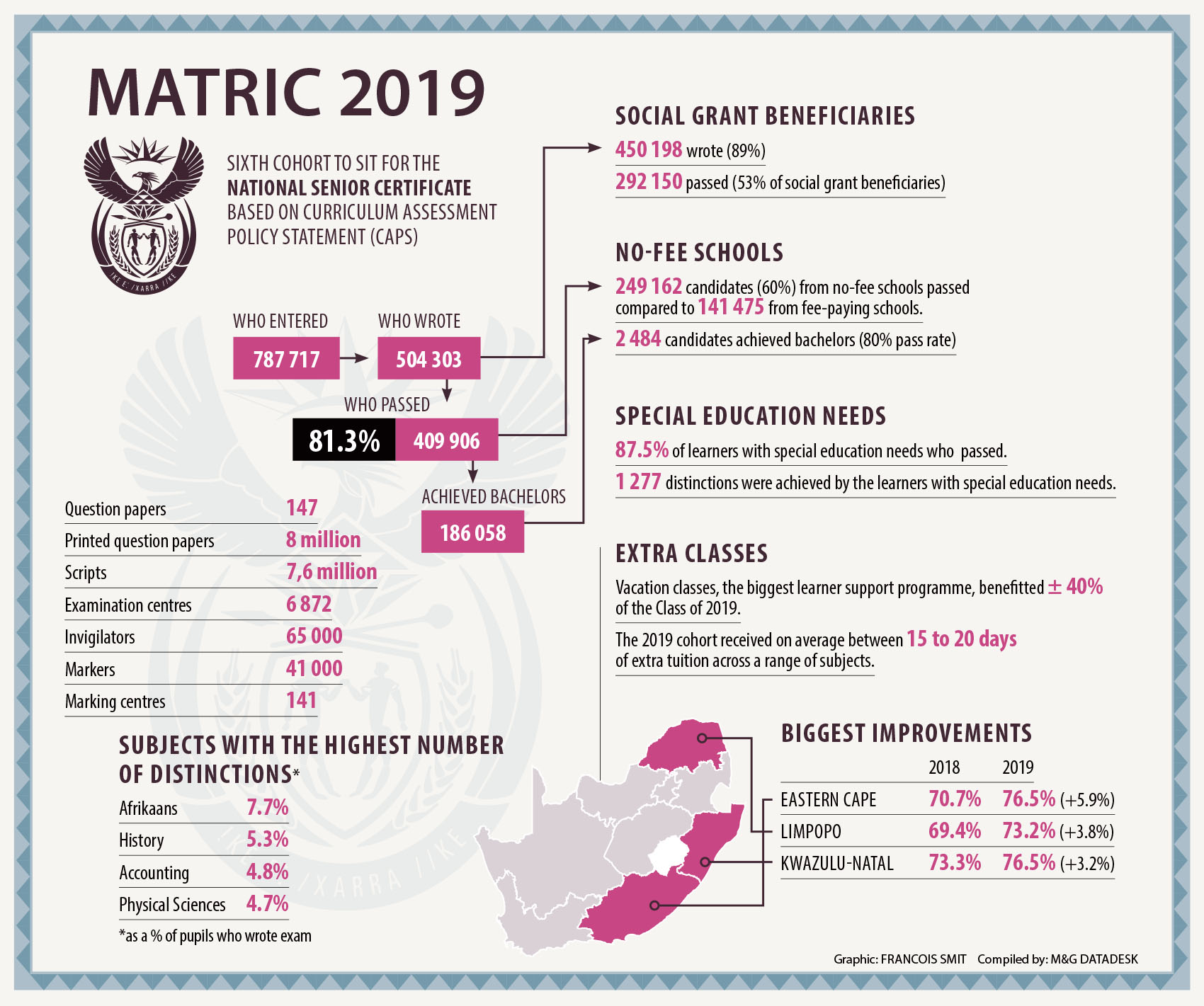 Without these changes and an increase in the quality of education and passes, educators and academics say that the 81.3% pass rate is meaningless.

A message to the Class of 2020: You are equal to this challenge