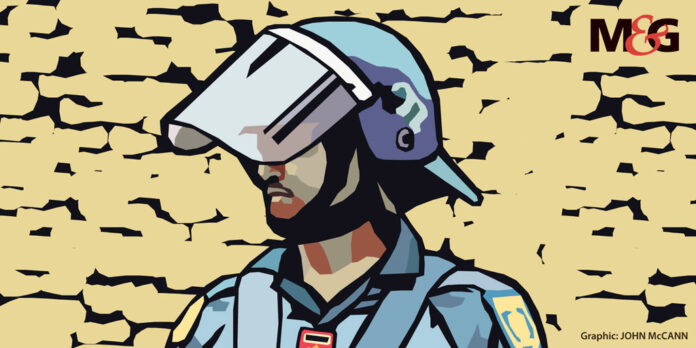 In May 15, in response to the assault on and the death of Collins Khosa in Alexandra township by members of the South African National Defence Force, Judge Hans Fabricius ruled in the high court that police and army actions in enforcing the Covid-19 lockdown restrictions called for urgent guidelines on the use of force.

Previous cases show that the lessons are not learned nor the recommendations implemented. Examples include the findings after Andries Tatane’s death in the Free State, the Farlam Commission of Inquiry into the deaths at Marikana and the extensive report of the Panel of Experts on Policing and Crowd Management.

Enforceable guidelines are an important component in a range of necessary steps to promote behaviour change along with law reform, training, supervision and effective and accessible accountability mechanisms. The guidelines on use of force must cover the whole gambit of use of force, from adherence to the law to the appropriate use of equipment and the post use of force reviews.

Any guideline on the use of force must include guidance for the acquisition and testing of appropriate “less lethal equipment” as well as training on the proper use by police of such equipment, precisely to effect a more considered, graduated and lawful response to public order threats and the avoidance of harm.

Given the potential of these weapons to cause significant injury and death, developing appropriate policy guidelines in their use in crowd management situations is crucial. One of the risks of the use of less lethal equipment (including stun grenades, rubber bullets and water cannons) is the assumption that they are always less lethal, often leading to their indiscriminate use in crowd management situations, “without exhausting all other possible peaceful means first”.

The use of such equipment in a variety of protests around the world “has been shown to result in frequent injury, disability, and even death”. This begs the question whether there is any need for the continued use of some of these weapons, especially rubber bullets.

We know only too well these risks from the death of Tatane in 2011, who died after being shot at point blank range in Ficksburg with rubber bullets. There was no criminal justice outcome from this unlawful and fatal use of force.

The Socio-Economic Rights Institute’s Double Harm report of police use of force against student protestors in 2016 includes documented instances of the inappropriate and unjustified use of stun grenades against students fleeing a police dispersal line, causing them severe facial burns.

Shotguns and rubber bullets were the predominant weapon used, resulting in injuries, including to the backs of fleeing protestors, severe eye injuries caused to bystanders from ricochet bullets and serious injuries to the face and body of several individuals shot at close range.

There were no officially-initiated effective investigations or consequences for the police from these reckless and unlawful incidents of the use of force.

Consequently, during Covid-19 lockdown conditions we have witnessed incidents of the unlawful use of force, causing serious harm and in at least 11 cases of death. On April 23, Siyasanga Gijana, was fetching water from a tap outside her home in Philippi, Cape Town, when a police officer in a moving vehicle shot her with rubber bullets. Gijana was admitted to hospital but lost an eye. The police left the scene without offering help her. It is a textbook case study of the violation of almost every aspect of the principles on use of force.

Across all these instances — past and present — there are recurring themes: the unlawful and inappropriate use of force, as well as the misuse and abuse of less lethal equipment and no consequences for the police officials who act unlawfully.

Although these less lethal weapons have become popular with both law enforcement agencies and the military, they have several limitations: structural, tactical, and doctrinal. For instance, the major limitation of modern kinetic energy weapons — rubber bullets — is that their accuracy deteriorates at longer distances compounding the risk of injury.

In addition, the shotgun used is an indiscriminate weapon, because the shooter has no control over the direction of the trajectory of the two rubber bullets in the cartridge. Furthermore, there is little public oversight of or access to the conditions and terms of purchase from international manufacturers in respect of the safety of these new weapons.

A number of factors contribute to the misuse of less-lethal weapons, the most significant being: gaps in international norms and regulations, insufficient testing of the weapons and poor training in the use of these weapons and their inherent risk.

In addition there is no accountability in the misuse of these weapons and under what circumstances it took place. Record keeping and reporting is poor.

South Africa is not unique in its lack of agreed norms or guidelines regarding the use of less lethal weapons. The 2019 United Nations Human Rights Guidance on Less-Lethal Weapons in Law Enforcement is the latest and most authoritative guidance on the subject, reflecting a global attempt to ensure that public order policing can be done lawfully and without risk of harm to members of the public.

The guidelines introduce the importance of the testing and legal review of any weapons brought into policing, not only on how they are ideally to be used but also how they are most likely to be used.

If this test were applied in the South African context it would be hard to see why rubber bullets and the shotguns used to fire them should not be banned.

We have 10 years of evidence to back this up.

The guidelines also detail the importance of monitoring and reporting the use of less lethal weapons. The UN recommends that states should collect and publish “data on those on whom force is used [which] should be disaggregated, to the extent possible, for example by age, sex/gender, disability … and ethnic group … This should include publicly available national statistics on deaths and serious injuries related to different categories of less-lethal weapons.”

While we urge the South African government to implement these guidelines, civil society has a critical role to play in raising awareness about the indiscriminate nature of these weapons, documenting the consequences of their misuse, holding the state to account, and lobbying the relevant authorities to act to stop the ongoing unlawful and inappropriate use of force and misuse of less-lethal equipment by the police and other security forces.

In April, the Covid-19 People’s Coalition made a submission to the parliamentary portfolio committee on police and the African Commission on Human and Peoples’ Rights, documenting incidents of police and security force abuse of authority and the unlawful use of force.

Soon after, the minister of police issued an instruction to all security forces outlining the South African Police Services Use of Force policy, reiterating a “zero tolerance approach to torture and cautioning against any use of unnecessary violence”.