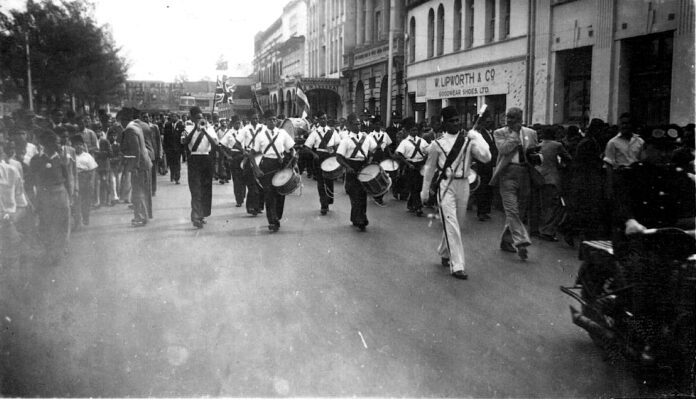 This was where I first heard Dr Monty Naicker [president of the Natal Indian Congress] and [South African Communist Party chairperson] Dr Yusuf Dadoo addressing a mass meeting. I told my father afterwards that I wanted to join the passive resistance and he told me: ‘I’m not educating you to go to prison,'” laughs activist and writer Phyllis Naidoo, pointing towards Nicol Square Parkade on the corner of Commercial and Grey streets.

Naidoo is, along with Imraan Coovadia and Dr Kesavaloo Goonam, one of several writers included in the Grey Street Writers’ Literary Trail launched this week by KwaZulu-Natal Literary Tourism.

While a monolithic parking lot may not arouse the tourist libido, its previous incarnation as Red Square — one of the political focal points of Durban’s CBD — has ensured its inclusion in the trail.

The history of Durban’s Grey Street casbah area — the subject and setting of various works of fiction and non-fiction — is the microcosm of the South African reality: stories of honour exist alongside gang murders. There is the nostalgic romanticism about a racially mixed area juxtaposed against the economic voracity of the shopkeeper class. There is love doomed by the caste system. The complexity of existence was played out under the colonnades, on the streets, the arcades overflowing with goods, and in the myriad flats that were more like extended families than mere living spaces.

Sitting in Little Gujerath on Prince Edward Street, stealing puffs from a cigarette held halfway out the entrance of the restaurant, “Auntie Phyllis” is reliving the political activity during her time in the area. A member of the NIC and the SACP, her non-fictional work, Footprints in Grey Street, profiles several characters from the struggle who had walked the area, including Jacob Zuma, AK Docrat and Florence Mkhize.

At 80, she remains feisty and as sharp as ever. Her anecdotes resound as much with the ideological conviction of the struggle as with the humour and humanity often forgotten in history books.

She talks of activist Billy Nair advocating that female comrades wear drawers with elastic bands at the waist and ankles in the manner of late Umkhonto weSizwe veteran “Dorothy Nyembe, rather than the panties which we wore because we could smuggle and hide documents more easily”. She talks of successfully managing a massed South African Communist Trade Union (Sactu) meeting, addressed by Walter Sisulu in the Wills Court block of flats, by surreptitiously filtering people in and out in ones and twos. She talks of circumventing activist AK Docrat’s 24-hour house arrest by convincing “the boers that he was a Muslim man who needed to pray five times a day, even though he was an avowed atheist”.

Naidoo remembers Docrat’s “flat, a miserable place filled with filth and books to the ceiling which [her brother] Paul and I cleaned once when Doc was in detention. He never thanked us, but seemed rather angry that somebody had messed with his books”.

Although Naidoo feels that the Indian community and those in Grey Street arrived in South Africa “with a caste system which fitted in very nicely with what was going on”, she also feels the area, from shopkeepers to the gangsters, responded to the fight against apartheid.

“Whenever there was a march, the entire area would close down,” she says. I wonder if it was out of blanket solidarity or perhaps there was also an element of fear involved.

“There may have been an element of fear,” she says, “but when the treason trialists were arrested [in 1956], Grey Street gave. They gave us food and other things,” she says.

The author of several works documenting the struggle, including Waiting to Die in Pretoria and 156 Hands that Built South Africa — The 1956 Treason Trial, Naidoo was awarded the Order of Luthuli in 2003 for her contribution to the struggle. Her political activism led to her banning in 1965, for 10 years, after which she spent a further five years under house arrest before going into exile in Lesotho, Zimbabwe and Zambia.

Eating the crunchy vadders at Little Gujerath, Naidoo’s joking about her false teeth takes a more serious tone — she lost most of her teeth when a letter bomb was delivered to her home-in-exile in Lesotho.

“Regardless, it was still a good life,” she says. “I was bombed, my children were killed [Sadha, one of her two sons, was murdered in 1989 on an ANC farm in Lusaka], but I wouldn’t change my life for anything,” she says.

The KZN Literary Tourism stems from a research project at the University of KwaZulu-Natal.

The Grey Street Writers’ Literary Trail features writers who lived in the area during apartheid, such as Aziz Hassim (The Lotus People), Phyllis Naidoo (Footprints in Grey Street) and the first female Indian doctor in South Africa, Dr Kesavaloo Goonam (Coolie Doctor). It also includes a newer generation of writers such as Imraan Coovadia (The Wedding) and Mariam Akabor (Flat 9) and landmarks such as the now-closed Shah Jehan cinema and the Emmanuel Cathedral, another political hotbed where Archbishop Denis Hurley served for 60 years.

The Blue Train: A trip of luxury, stunning vistas and scenes of devastation

A tribute to Ahmed Essop, teacher, writer and shining light of South Africa

‘I was there’: Essays that map a life