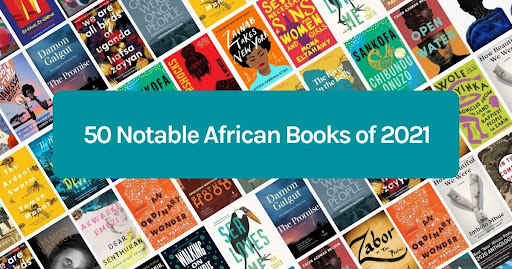 In partnership with the Africa Centre and Brittle Paper, we are co-publishing the platform’s annual 50 Notable African Books. Launched in 2018, the 50 Notable African Books of the Year list is a curated collection of the most impactful African books in a given year. This year, the list continues the tradition of offering something for everyone: speculative fiction, YA, poetry, queer writing, memoirs, political thrillers, as well as books from 20 African countries, including, for the first time, Mauritania and Central African Republic. The entire list appears in print in this week’s Mail and Guardian.

A Bigger Picture by Vanessa Nakate

Ugandan activist Vanessa Nakate is young and outspoken about climate change. In her debut book, she advocates for including African voices and communities in the debates around climate change.

A Blood Condition by Kayo Chingonyi

The “blood condition” in Chingonyi’s collection refers to HIV. He uses the metaphor to explore grief as an intimate and collective experience within the context of Zambia’s history.

Max Lobe’s book celebrates the unbreakable bonds of brotherhood. After the sudden death of his father in Cameroon, Roger leaves town to try his luck in Europe, but his brother is determined to find him.

Nadia Owusu’s Armenian mother abandons her when she is three. Her Ghanaian father dies when she is 14. In his moving memoir, Owusu depicts a life lived in utter rootlessness and explores the pain and triumphs of diasporic life.

A powerful multi-generational story that celebrates the diversity of women’s lives. Mswane’s novel centers characters who struggle with the contradictions of contemporary South African society, particularly in its response to queer experiences.

Kasimma’s debut collection of stories draws heavily from Nigerian mythic traditions. The stories are thrilling in their somewhat absurdist and surprising takes on contemporary Nigerian life.


An Ordinary Wonder by Buki Papillon

An inspiring and gut-wrenching story about an intersex Nigerian girl. With this page-turner, Papillon joins the chorus of African writers inventing a new language for unsilencing queer voices in African literature.

The 352 pieces by 140 poets from across the continent and the world make this collection magisterial. It features poets from Nigeria, Angola and Mozambique, as well as Cape Verde, São Tomé and Príncipe, Portugal, Brazil, China and many more countries.

A celebrated novelist in the francophone world, Senegalese writer Mohamed Mbougar Sarr, is introduced to English readers for the first time with his debut novel, a political thriller that dissects the culture of religious fundamentalism.

Castles from Cobwebs by JA Mensah

Weaving elements of Ghanaian folklore and other non-realist elements, JA Mensah tells the story of Imani, an African girl whose world extends across Accra and a remote Northumbrian island.


Children of the Quicksands by Efua Traoré

Traoré’s young adults novel is imaginative nourishment for young readers. It tells the story of Simi, a young Lagos girl who visits her grandmother in a Yoruba village and becomes entangled in the fate of an enchanted lake.

Soyinka’s political thriller—his first novel in 48 years— exposes the dark underbelly of power in Nigeria. A true literary veteran, Soyinka’s “powers of invention” remain as vibrant as ever.

Yabouza’s English language debut is a humorous domestic drama set in Bangui, Central African Republic. It tells the story of two co-wives who fall into bitter conflict after their husband’s death.

Emezi captivates readers with this account of their life as a god in human flesh. The memoir details the emotional, psychological, spiritual and cultural implications of inhabiting multiple realities.

Every Leaf a Hallelujah by Ben Okri

Celebrated magical realist author Ben Okri and The New Yorker illustrator Diana Ejaita team up for this “environmental fairytale” about a girl who braves the forest to find a life-saving plant for her ailing mother.

Home Is Not a Country by Safia Elhillo

This beautiful blend of poetry and storytelling centers a girl named Nima and her struggle with multiple cultures and identities. An illuminating study on what it means to be an outsider.

How Beautiful We Were by Imbolo Mbue

The title of the book evokes Brenda Fassie, whose life and work haunts Putuma’s poignant exploration of black women’s lives in history, with a focus on how their legacies are always in danger of erasure.

Ivorian novelist Véronique Tadjo’s beautifully experimental work details the tragedy of living in the midst of the Ebola crisis. In the final chapter, Ebola takes the floor to reflect on its life as a virus unleashed by human action.

Akpan, a breakout star of the 2000s, is known for the short story collection, Say You Are One of Them. With his first novel, he blends familiar African literary motifs in a searing critique of American racial politics.

In her third chapbook, Adichie attempts to communicate the blinding pain of losing a father. It is a beautiful and tender reflection on the many ways that grief makes and unmakes us.

The wide range of stories will make you think, laugh, tear up and, above all, engage with Nigerian culture in a meaningful and intimate way.

In a post-George Floyd world, Nelson’s debut novel is deeply, painfully resonant in its exploration of black masculinity in the context of racial injustice. There are also sparkling insights on art and the magic of language.

This cross publication is a collaboration between Brittle Paper, the Africa Centre and the Mail & Guardian. Read the full list in print in the Mail and Guardian or on the Brittle Paper website.