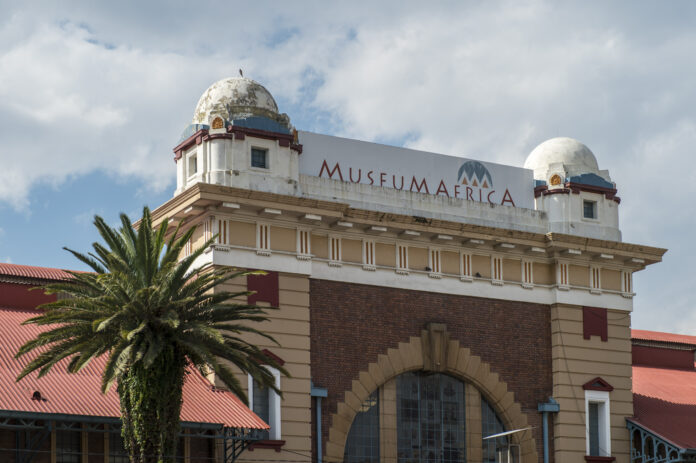 When heavy rains fall and there is stage 4 load-shedding, spare a thought for the people working in the City of Johannesburg’s museums, battling to safeguard artworks and artefacts in leaking and disintegrating buildings.

“The Johannesburg Art Gallery (JAG) is in a disastrous condition. There’s no secret about that,” said heritage architect Brian McKechnie.  “There was a project to do some restoration work on the gallery previously and I’m not quite sure what was and what was not approved and I don’t think anyone is one 100% sure why it was done because the architect who was busy with the project is no longer involved.”

According to McKechnie, original sections of the gallery were compromised by previous work done by the Johannesburg Development Agency (JDA) and the latest work has compromised the whole building.

“All the original sandstone parts of the building leak now,” he said.

Geology professor Bruce Cairncross, a member of the Geological Museum Association (GMA), which acts as an advisory body to the Museum Africa’s Geological Museum (and thus to the City), said the area where 95% of the museum’s artefacts are stored is flooded. The water comes in through the roof and from the highway.

The situation in both museums has been going on for years and years, with spasmodic interventions allegedly making things worse or having little effect.

In the case of the JAG, the Friends of JAG has tried to work with the City on numerous occasions but has been stonewalled. There is little communication between the political leadership and the people at the coalface – the museums’ curators and employees, who are required to refer any enquiries to the powers that be in the City.

“Appointing a contractor can take months. There is no communication about contractors or anything at all for that matter. We get told things the day before they are required or just before they happen,” said a museum employee who requested anonymity.

The agendas of the JDA and the Johannesburg Property Company (JPC), both implementing arms of the City, are accused of having divergent agendas when it comes to the implementation of renovation and upgrading initiatives. Friends of the JAG volunteer Eben Keun said the previous heritage architect was contracted by the JDA while a construction company with no heritage experience was contracted by the Johannesburg Property Company, making the architect’s job untenable.

“The underlying problem that persists is that there is an inherent conflict between JPC and the council. The JPC are self-confessed developers and like any commercial developer and they are responsible for organising and getting the work done and then convincing their client — the council — that it has been done acceptably. They are both player and referee and as a result my situation became untenable. As an architect, I cannot work for the builder,” said Jonathan Stone, the architect involved.

Nthatisi Modingoane, spokesperson for the City, said nothing went wrong with the work that has already been concluded at the JAG.

Constrained resources mean the museums don’t have a budget for on-going maintenance.

Keun said: “If you have a maintenance budget you can do simple things like buy light globes but maintenance budgets appear to be non-existent in museums in South Africa. The people who work at JAG are sitting at the receiving end of a terrible systemic idea when it comes to how museums are managed in the City structure.”

Cairncross echoed Keun’s sentiments regarding the Geology Museum at Museum Africa.  “There used to be a small budget of about R10 000 from the City that could be used for new acquisitions or some educational activities for the Geology Museum, but that stopped years ago. There is zero budget. In fact the GMA — sometimes in collaboration with Flo Bird [chairperson of the Johannesburg Heritage Foundation] — has paid from our own funds to fix lights for example.”

An insurance claim was apparently paid out for the damage at MuseumAfrica, but nobody knows what became of the money.  There has also been no apparent outcome of the theft in 2013 of gemstones worth thousands of rand. Thieves broke in through an alarmed security gate at the back of the building and removed the boards at the back of display cabinets, carefully replacing them before leaving with their hoard.

“There has been no improvement in conditions of the Geological Museum since 2017,” Cairncross said. “We, at the GMA, are extremely concerned about the collection. I don’t think the City is well informed about the value of the collection,” he said, explaining that the Johannesburg  geology collection, which is probably the second largest in the country, is of immense scientific and material value.

He said the priority for the Geology Museum is to waterproof the flooded area and fix the leaking roof, which affects the entire MuseumAfrica building. Moving the Geology Museum is a consideration, but it would mean moving 20 000 specimens, most of which are in storage, rather than being on display for researchers, as is the international norm.

The new MMC for community development, Ronald Harris, said the Johannesburg Property Company employed a contractor to do repairs at MuseumAfrica and the Geology Museum in October and November last year but they did a bungled job.

“One of the problems is that there is no quality control,” he said. “Contractors can subcontract the work and there is no checking up.”

He said there is now a tender to the value of R3-million to R4-million to fix MuseumAfrica. How much of this will be allocated to repairs of the Geology Museum is unclear.

Harris’s proactive approach has been welcomed.

“It is time to see the glass half full rather than half empty,” said heritage and creative consultant Steven Sack, adding that the new coalition government has opened up possibilities that were previously not possible.

Keun said: “There does seem to be a bit of movement. The JAG curator and the new MMC are really engaging around looking at new scenarios for what could happen to ensure the safety of the art collection, and that may mean moving it out of the current building. That would be a wonderful thing if we can get that right. There does seem to be a glimmer of hope that the City is starting to wake up to the emergency that is around the very valuable art collection.”

Harris said: “I think there has been a monumental marking of time. People have been marching on the spot, so to speak, while the building was crumbling around them.”

He conceded that there have been design faults and the way in which projects and the precinct have been handled appears to be problematic but said it is important to focus on the best way forward. Harris hopes to have a clearer idea after meeting with the relevant directors and staff on 14 March.

The JDA has in the meanwhile awarded a contract to a team of architects to upgrade and renovate the JAG. Kylie Dickson, of SAJ Architects, said her team’s non-disclosure agreement with the JDA prevented her from giving any information that was not in the public domain.

“We did a bit of a check and the only thing that is public knowledge at this point is that we have been appointed by the JDA so that is all I can tell you right now,” she said.

Enumerating a number of actions the City has taken at JAG, some more successful than others because of inherent design flaws, City spokesperson Modingoane said a heritage architect has been appointed to conduct an audit of the building and make recommendations.

The possibility of relocating at least part of the JAG collection to the vacated Anglo American offices at 44 Main Street is under consideration.

Rumours are circulating about an arrangement with Anglo American to house at least part of the JAG collection in the vacated Anglo offices in the City..

Modingoane confirmed that the City is considering an offer by Anglo American to relocate the JAG collection while repair and upgrade work is underway, but no final decision has been taken.

In 1986, Anglo American established a R4-million Johannesburg Centenary Trust fund that paid for an extension that more than doubled the JAG’s collection of South African art, among other interventions. Regarding the relocation of the collection to 44 Main Street, Anglo American spokesperson, Sibusiso Thsabalala said this is “very speculative”.

The chief executive of Constitution Hill, Dawn Robertson, suggested that Constitution Hill might be an option for the JAG. “The museum needs to stay in the inner city and it would be perfect within a museum complex that is well-managed. Any of the semi-developed land parcels can accommodate five, six storeys,” she said, adding that if there are investors and the move is approved, this could be a promising option.

Sack noted that Constitution Hill was an important option for a new JAG.  “It is in the old City; it is central, and it is in a democratic space.”

On the idea of a public-private partnership, which was put forward by several people, Modingoane said: “The City does not have such plans.”

Sack said beyond the immediate crisis, there needs to be a social compact between the government and all stakeholders to reimagine the City’s cultural institutions.

Harris said: “I am a big fan of collaboration.  I would like to see a meeting of minds between ourselves and people who are willing to invest in the arts and the heritage of the City.”