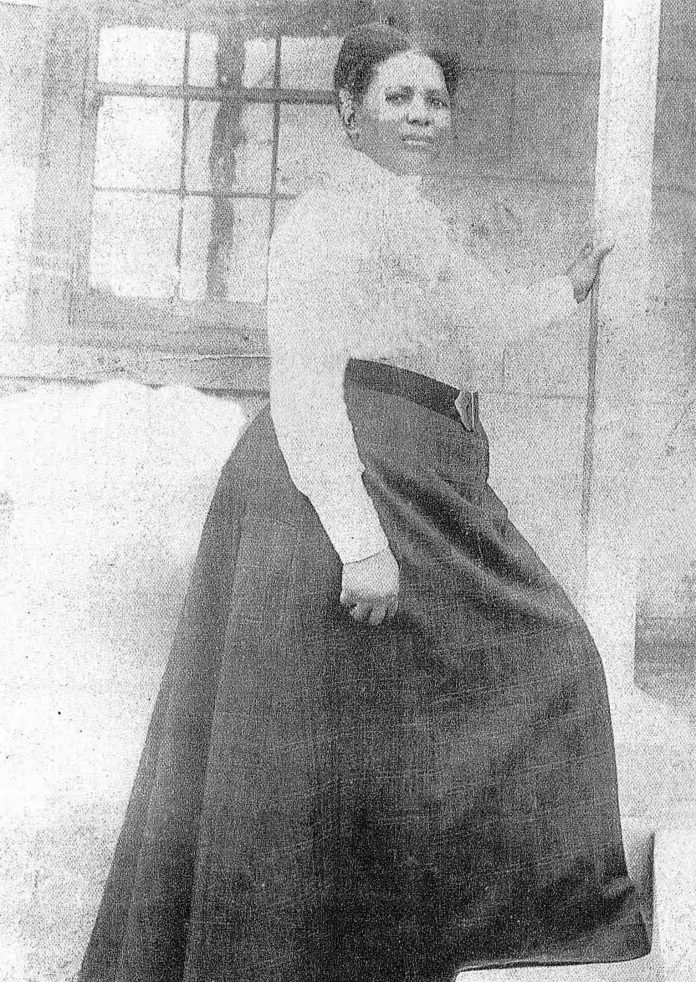 It is 105 years since Nokutela Mdima-Dube died from kidney failure at the age of 44 and disappeared from the public’s imagination. For many years, her grave at the Brixton Cemetery in Johannesburg was unknown, only inscribed CK 2973. CK stood for “Christian Kaffir”. But as Toni Morrison once said: “Definitions belong to the definers, not the defined.”

Often remembered only as the wife of the ANC’s first president, Dr John Langalibalele Dube, it is time to give Nokutela the respect she deserves.

Born in Inanda, north of Durban, in 1873, her father was Simeon Mdima, a devout Christian convert. Historians have not yet found her mother’s name. Her odyssey from colonial Natal to the world began in 1881, when she enrolled at the Inanda Seminary. Daniel and Lucy Lindley, members of the American Missionary Board, started the girls’ school in 1869. It gave her a rich philosophical foundation and enhanced her self-confidence. She was head-strong, stoical and strove for a community-oriented praxis. During her 11 years at the school, her brilliance and charisma earned her the confidence of her supportive teachers. These teachers included Ida Belle Willcox, who ran the Inanda mission with her husband, William Willcox.

The coffee table book published by Legacy Creates in December last year, Nokutela Mdima-Dube, 1873-1917, shows that in 1894 the 22-year-old Nokutela married Dube, a fellow teacher at a local day school in Amanzimtoti, south of Durban.

In 1895, the couple travelled to New York and visited the Union Missionary Training Institute, where Nokutela gave talks, sang, and enrolled for piano lessons. During this visit the Dubes raised funds to build Ohlange Institute in 1900. Nelson Mandela voted at this famous school during South Africa’s first democratic elections in 1994. On this day Mandela said he had come to report back to Dube, the founding president of the ANC.

In the US, Nokutela attracted the attention of the media, including the New York Tribune and Los Angeles Times. In 1898, her essay, Africa, The Story of My Life, appeared in the US mission journal, Life and Light for Women. The essay imbricated the personal with the political and attacked colonial violence guised as modernity. “It is only the useful of civilisation that we want them to know. But civilisation is not all. I like my country better.” In an article published in the Los Angeles Times on 13 January 1899, she is described thus: “Her manner is grace itself.”

Nokutela shot to prominence in 1882 after her essay, My Home, was published in the Rice Country Journal in Minnesota. The essay richly evokes a typical African childhood of her times: “When I was a little girl, I was sent to a native day school at Inanda, and when out of school I used to go with my sisters and brothers to our parents’ gardens to chase away birds from the millet field and keep away monkeys and baboons from the pumpkin and corn gardens.”

Legacy Creates is a company inspired by the life and legacy of Nokutela Mdima-Dube. Founded by Asanda Sizani, the company includes co-producers Florence Masebe, Masasa Mbangeni and Siphokazi Jonas, as well as publisher Busi Sizani.

Sizani states this as their mission: “We are a collective of five black women. Nokutela wanted us to come back together at this time. We are all storytellers, combining our skills set to create a long-form, multipronged project in honour of this amazing African woman. Nokutela was a pioneering essayist, teacher, composer and community builder. This was a pioneering woman, she is important. Yet she gets that odd mention on Women’s Day as the wife of ubaba Dr John Langalibalele Dube. And that she was that woman who could not have children. The framing alone was problematic. Nokutela achieved so much in her lifetime, under immense odds. Yet she appears to have been deliberately written out of history books and our public imagination. We are proudly gathered in her illustrious name.”

Nokutela left her mark in education, community development, the arts and the media in a long list of remarkable achievements. Along with her husband, the couple supported the aspirations of black people in colonial Natal and fought for their rights. In 2009, Ida Belle Wilcox and Reverend William Cullen Wilcox received the Companions of OR Tambo Silver in 2009.

Cognisant of the power of newspapers in American life, the Dubes founded Ilanga lase Natal. The paper still exists, and at some stage boasted the renowned African intellectual HIE Dhlomo as its editor. In the late 1890s, she taught at Inanda Seminary, her alma mater. And in 1911, Nokutela, a gifted arranger and composer, published Amagama Abantu, A Zulu Songbook comprising 31 compositions. Notated in the tonic, sol-fa system, introduced in South Africa in the 19th century, the songbook lists John L Dube as the composer, and Nokutela Mdima-Dube as the arranger.

The coffee table book cites Dr Dube’s infidelity, “and the pregnancy of a student at Ohlange”, as the main reason for Nokutela leaving her husband in 1914 and moving to Johannesburg. The book also states that in 1979, “musicologist David Rycroft found a rare surviving copy of the original song book in the University of Zimbabwe’s library and decided to publish a modernised revision”. ANC Youth League leader Masabalala Bonnie Yengwa translated it into English. Despite Rycroft’s critical role in bringing Amagama Abantu back into circulation, music composer, classical pianist, vocalist and musical archivist Monthati Masebe is unhappy that Rycroft questions Nokutela’s choice of “C” in certain parts of her song, Inhlanhla Kwabashadayo. “I am deeply uncomfortable with that, and I hope that we will collectively explore and research further why David Rycroft, who transcribed her work, chose to whitewash what was potentially beautiful Africanised harmonies,” says Masebe.

Legacy Creates’ Sizani discovered her hero by chance in 2016, after watching a YouTube clip of Professor Chérif Keïta’s 2013 documentary, Ukukhumbula uNokutela. Keïta, a Malian literary scholar who teaches at Carleton College in Minnesota, US, spent years doing research on Nokutela. He travelled to South Africa where he interviewed people who could shed light on her, such as Joyce Siwani, Nokutela’s descendant, who also features in the Nokutela coffee table book.

Keïta says during their travels, the Dubes met the influential black educator Dr Booker T Washington. Sizani says aspects of Nokutela’s life evoked her own personal passions, and her upbringing at Qonce (previously called King William’s Town) in the Eastern Cape. “I grew up in the church, I love hymns and everything that relates to South Africa’s music heritage. I love collecting, learning and singing hymnals. I grew up eSabatha, an Adventist church. My mother worked at Loveday Press. In fact, both my parents are into music. I grew up around music. It was very normal for me to come into the lounge and find my mother teaching a quartet, a quintet or arranging music for a local choir. It’s not what she does professionally, but she is just a naturally gifted musician. At church, I sang in choirs and a capella groups,” explains Sizani.

Legacy Creates has also produced a short film shot at Inanda Seminary, titled Amagama ka Nokutela, which is also the name of a series of 14 commissioned art works and a music series. The coffee table book features two essays by Nokutela, photos of the Dubes, and excerpts of profiles on her taken from old newspapers. There are also artworks by Jason Langa, Ofentse Netshivangane, Levy Pooe, Logan Woolfson, Xolani Sivunda and Masonwabe Ntloko, among others.

Ntloko was excited about drawing images of Nokutela: “My work focuses on the black experience, the past and the future, and although I did not know anything about her, I infused my Xhosa heritage and textile design aesthetics to invoke the past and speak to the modern techniques such as digital modes of expression. I try to make my work relatable to African heritage.”

Soweto-born, Pretoria-based actor Nokuthula Mavuso, who stars in the lead role in the 11-minute film and in the series of portraits of Nokutela, had long cherished the dream of portraying this trailblazer after she discovered her by chance during an unrelated research project in 2015. “I knew back in 2015 that I wanted to portray her. I just knew. Her story would not leave me. So often, history forgets about women or they are erased altogether. Women are remembered as supporters or shadows of their husbands. I felt the same about maMdima,” says Mavuso.

Sizani is grateful that the National Institute for the Humanities has funded the current reprint. She is also saluting companies such as Uber and Microsoft SA for screening the film.

“Uber was huge because it was global, and we are grateful they booked a series of virtual screenings. Classically trained Johannesburg pianist, composer and scholar Keenan Meyer, who contributed to the musical vision, is in awe of the project. “Where I come in is to give life to the sheet music of Nokutela’s compositions contained in Amagama Abantu. I have deep reverence for the hymns written by our predecessors, for they leave us clues on ways of living.

“This project will serve as a catalyst in our efforts to remember our history, not only as a country, but as a united African people who celebrate the divine feminine and not shun it, as we have been taught to do by our colonial oppressors,” says Meyer.

Jazz musician Spha Mdlalose also loved Nokutela’s music from the onset. “The music has a gospel influence. Particularly hymnals. You can tell that the church played a key role in her writing style, although I found the lyrics to be secular. They tackle different everyday topics like love and heartbreak. There is a simple beauty in the harmonic structure that sounded so familiar to me, and I really enjoyed that. I was approached to be a part of the project by Asanda Sizani. I have always been a fan of her work, so I said yes almost immediately. The more I read about Nokutela’s work, and met people who know more about her story, the more significant this project felt.”

Sizani is right that, even though “Nokutela could not have biological children, this did not stop her from becoming the person she wanted to be. She gave birth to so many children. We, too, are also her children.”