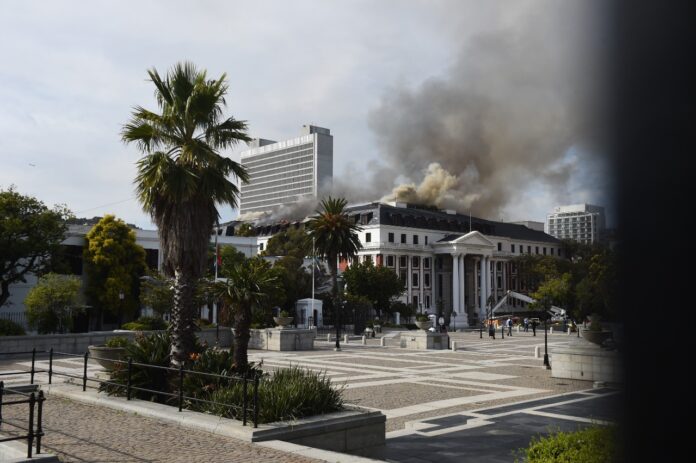 Two days after a fire in the national assembly,  Zandile Christmas Mafe, 49, appeared  2 January in the Cape Town magistrate court on two charges of arson.

Mafe, who has lived for six years in Site B in Khayelitsha, Cape Town, appeared on five charges: housebreaking with intent to steal and theft, two counts of arson, one count of destroying essential infrastructure by “setting fire to the parliament building/national assembly” and for being in the possession of explosives.

Prosecutor Adnaan Gelderblom told the court the state would oppose bail because the preliminary charges fall under schedule five offences.

He submitted a request for a postponement of seven days because the state could not yet visit the crime scene.

The fire that gutted the assembly chamber, where sittings are held and the State of the Nation address was to be hosted in February, was contained at midnight on Monday after a new blaze flared again earlier that afternoon. On Monday, Public Works and Infrastructure Minister Patricia de Lille said access to the crime scene was not yet possible because temperatures were too high. Parliament’s presiding officers and government ministers are expected to receive a report on the fire on Friday morning.

The court heard that Mafe is unemployed, has no previous convictions and pending cases against him and has no assets.

His defence, Luvuyo Godla, objected to the state’s request to postpone the matter by seven days. He argued that “the state must lead today” and that it must provide evidence of why his client is charged with a schedule five offence.

While acknowledging the state’s allocation of the offence for destroying the infrastructure of a national key point, Godla argued “whether it is in Khayelitsha an informal settlement … Llandudno or Constantia … it remains arson” and therefore was a schedule 1 offence.

Mbalo ruled the state needs to determine the extent of the damage of the fire, and must determine whether the accused appears on a schedule one or a schedule five offence.

The case is postponed to Tuesday, 11 January.

Outside court, Godla said that “this poor man is made a scapegoat for failures of executives and legislators”.

Responding to questions on who is paying Mafe’s legal fees, Godla said: “That information is very privileged.” He later said he is handling the matter pro bono.

Directorate for Priority Crime Investigation spokesperson Thandi Mbambo said outside court that the Hawks did not rule out the possibility of more suspects being arrested as the investigation continues.