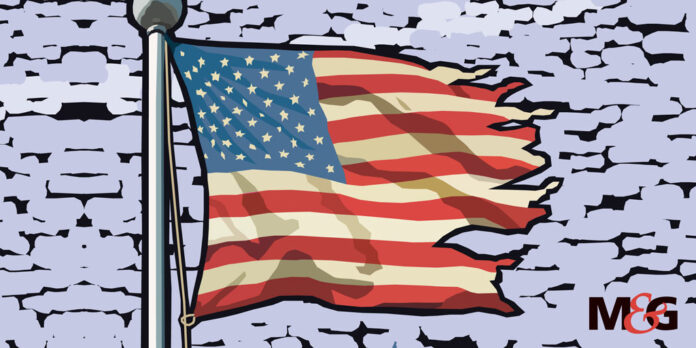 An Asian colleague who has lived in Washington DC as an expat for a long time called me early on Tuesday morning. He cannot sleep. He is too fretful.

Joe Biden is leading the polls, but he says that because he feels like he is living in a “repressed, authoritarian state” he is genuinely concerned that Tuesday’s presidential election may not be free and fair.

Democracy in the United States is on the brink. It is not just that Tuesday is a significant fork in the road in the middle of a series of even bigger forks in the road for human life on Earth, but that a political system that, for all its faults, has long been the standard-bearer for liberal democracy is facing its sternest test.

Such is its power — hard and soft; economic and cultural — that American presidential elections have always mattered to everyone everywhere, however much some might wish that this were not the case.

And precisely because of all the other forks in the roads, this election matters even more than usual. The climate emergency needs the Paris Agreement to succeed and for the world to reach a combined carbon net zero by 2050. Donald Trump’s withdrawal from the treaty obligations has undermined its prospects of success.

Is my friend’s fearfulness an over-reaction or is it justified? The previous day, the supreme court handed down a judgment in one of what is likely to be a series of significant electoral law decisions.

By five to three along ideological lines, the court ruled that the state of Wisconsin can count only those absentee ballots that arrive by election day, even if they were mailed days earlier. And here’s the rub. Employing tactics straight out of the Jacob Zuma playbook, Trump has deliberately hollowed out the US Postal Service. It used to reliably deliver post anywhere in the US, but now first class mail has been taking on average 10 days to arrive in Wisconsin.

Taking control of a state institution (the Postal Service) is deliberate vandalism of democratic process (the election). South Africans might be inclined to call it “state capture”.

One of the majority judgments was penned by the notorious Brett Kavanaugh, appointed amid much controversy to the supreme court in 2018.

It includes this piece of jurisprudential muddle-minded mediocrity: many states require absentee ballots to arrive by election day because, Kavanaugh wrote, they “want to avoid the chaos and suspicions of impropriety that can ensue if thousands of absentee ballots flow in after election day and potentially flip the results of an election”.

As Justice Elena Kagan wryly noted in her dissenting judgment, “There are no results to ‘flip’ until all valid votes are counted. And nothing could be more ‘suspicio[us]’ or ‘improp[er]’ than refusing to tally votes once the clock strikes 12 on election night.”

This is what happens when you pack the supreme court with people whose only qualifying pedigree is that they are loyal and partisan conservative extremists — a number that has now increased to six with the swearing in of Amy Coney Barrett on Monday.

Barrett’s father is a senior lobbyist for the petroleum industry; in her senate confirmation hearings, she declined to accept the science of climate change.

This is populism writ large. The denial of complexity. The denuding of the dignity of democratic process. The race to the bottom.

But it appeals to Trump’s base — an ugly consortium of “Black Shirt” white supremacists, evangelical “Christians” and the super-rich —that resembles the unholy alliance that voted “leave” in the United Kingdom’s Brexit vote in the same year that Trump took office. Both are symptoms of a backlash against a liberal elite that has lost touch with people’s social justice concerns.

Trump’s base is very loyal. That much is clear. But he works so hard to respect one golden rule of politics — “never lose touch with your base” — that he has totally neglected another: that to win tight elections you need to reach out to swing voters in key swing states. He has singularly failed to do this, doubling down instead on many of his most divisive messages.

Even allowing for electoral gerry-mandering and foul play and supreme court partisanship, the Democrat is likely to win the popular vote decisively, perhaps with a landslide. But that does not assure him victory, because of the US’s antiquated electoral college system, where each state has a certain number of seats assigned to it, based on a formula whose origin and validity no one can seem bothered to recall.

The magic number is 270. It will give the victor the keys to the White House.

There are a number of “swing states” that could move either way, nine of which are crucial. The blue-leaning states with a reasonable margin in favour of Biden are New Hampshire, Nevada, Michigan, Minnesota and Wisconsin; the two crucial Democrat-leaning states with closer margins are Arizona and Pennsylvania; and the two slightly blue toss-up states are Florida and North Carolina.

The smart money is on Pennsylvania being the bellwether state.

Trump’s strategy may well turn out to be less about winning than stopping Biden getting to 270 — by targeting all blue-leaning states, and by voter suppression and intimidation, waging a war on mail-in-ballots, and preparing to contest close outcomes.

Unless Biden wins decisively in the electoral college, weeks of litigation would appear likely — which takes one back to the supreme court and to Kavanaugh and Barrett.

Although winning the White House looks like the big prize, regaining control of the senate is politically no less important because it will determine whether Biden has more room for manoeuvre to pursue a more adventurous policy agenda or be bogged down by a logjam “inside the Beltway” — Washington DC government politics.

Five senate races — in Arizona, Colorado, Maine, Michigan and North Carolina — are crucial if the Democrats are to win the senate.

Regardless, is the presidential election really a fork in the roads? Yes, in much the same way that Cyril Ramaphosa’s victory in the ANC presidential race in 2017 abruptly curtailed Zuma’s time in power and brought with it the possibility of renewal.

As with South Africa and Ramaphosa, so Biden will face resistance. Trump may go, but Trumpism will linger longer — having seeped deep into the folds of American society and its body politic, much like Zuma-ism has in South Africa. American politics is likely to remain largely inward looking for many years. The culture war will persist.

Biden will have neither the energy nor the vision to arrest this trend. He will struggle to build any sort of unity in such a bitterly divided society.

But the US president appoints several thousand people directly or indirectly. The integrity and worldview of those appointees matters a great deal — even more so if the White House is taken from the hands of a capricious, childish, racist demagogue.

Biden is reasonable. He believes in climate change. That’s a good start. His administration will rejoin the Paris climate change treaty. He supports rather than obstructs the international rule of law. He will rebuild multilateralist links around the world and institutions that are essential to collective action, especially in the eye of system-shock storms such as the pandemic and climate change.

Trump gets in the way of that. Even though Biden is not the dynamic, transformational leader that the global left and the US needs to replace nationalist populism with a progressive alternative. But sometimes a bit of “middle of the road” moderation is just what the doctor ordered.

Basic civility should not be under-estimated. And after the past four years of Trump, a Biden victory will invite not just a deep sigh of relief, but will stir a sense of hope that the US can recover its collective senses and begin to act on the basis of reason and science, rather than bigotry and bile.

As the unrelenting tide of history moves up the shore, so an age of unreason will begin, perhaps, to be eclipsed.

Richard Calland is associate professor of public law at the University of Cape Town. His book, jointly authored with Mabel Sithole, Leadership and Crisis — Lessons from South Africa’s Post-Apartheid Presidents, will be published in 2021 by Penguin Random House