Orange you glad to see me? 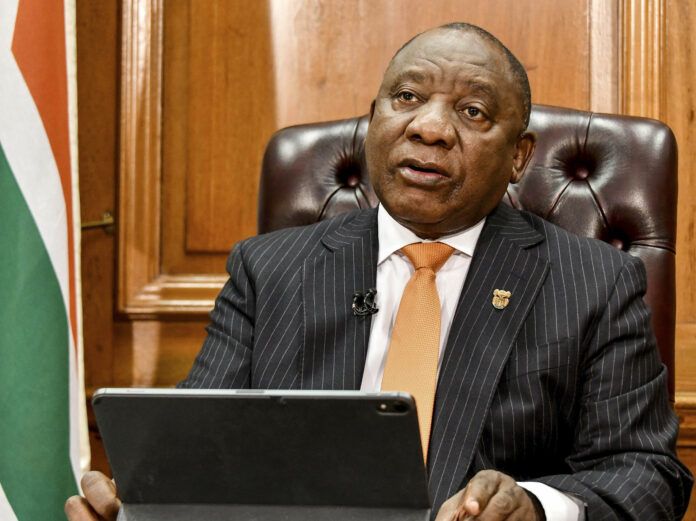 Like many of my fellow South Africans, I’m wondering what the presidential makeup artist was thinking when he or she was daubing on the pancake ahead of Wednesday night’s long-awaited family meeting. The number-one citizen was hardly recognisable under a layer of foundation that was probably thicker than the mask he took off to have a chat with us. For a moment, I thought there had been a silent coup, that the man behind the podium was a ringer, a doppelganger, installed behind the podium by Carl Niehaus and his comrades to keep us occupied while they hit the cash register.

Perhaps the artist in question felt a lighter complexion would work better with Cyril Ramaphosa’s orange tie — a nice nod to the orange mask protests aimed at keeping the pressure on his comrades with a taste for other people’s money — and applied accordingly. Perhaps the artist was simply feeling artistic and channeled his or her inner Rasta, while getting the boss ready for the cameras. Perhaps the commander-in-chief was in on it, hamming it up a bit for the cameras, egging them on, knowing only too well that the nation is in dire need of any light relief it can get.

The extension of the state of national disaster by a month — and the dire warnings of a deadly second wave if people don’t start taking the pandemic seriously again — that Ramaphosa gave us on Wednesday night were to be expected.

We’re about four weeks behind the United Kingdom and Europe, where new lockdowns have kicked in, a reluctant response to a massive spike in infections — and deaths — and will end up in the same situation unless we stop acting like it’s already Christmas and wear our masks or stay in the pozi.

The one month extension of the Temporary Employer/Employee Relief Scheme (Ters) payments was a lovely touch. Much appreciated, given the difficulties of life on a reduced salary. By the time we get October’s money it will be December, which will make the locked-down Christmas a little less bleak. Ramaphosa made it clear that the payment will be the last one, though, so January will be a challenge, to borrow a term from the boss.

The opening up of the borders for a rush of year-end tourists makes me a tad nervous, given what’s going down in Europe. Hopefully we will get hit by a flood of holidaymakers from countries that have avoided — or dealt with — second waves of infections and we will be able to avoid what happened during February and March.

I wonder if Ramaphosa wore his orange tie at Tuesday night’s virtual meeting of the ANC top six to discuss the arrest warrant issued for its secretary general, Ace Magashule, over the R255-million asbestos scandal in the Free State, just for a laugh? That would have been a nice touch, just to lighten the mood of the meeting, which can’t have been particularly giggly, given the topic up for discussion and Magashule’s disposition of late.

I wonder who got the ball rolling, broke the ice, in the meeting? It can’t have been easy. Was it Ramaphosa, with an “OK, chief, crack on, I have a country to run” or did Ace himself open the betting with a “Comrades, the enemy has infiltrated the African National Congress?”

Or was it left to deputy secretary general Jessie Duarte to introduce the subject, given that neither treasurer Paul Mashatile nor deputy president David Mabuza are likely to have been willing to do the deed.

ANC national chairperson Gwede Mantashe, who, in theory, should have been running the meeting, missed it — he was in the air, we are told — and had to be briefed afterwards, so we know it wasn’t him.

It’s no surprise that Ace didn’t offer to implement the party’s stand-aside rule and hand over the keys to Luthuli House to Duarte till his case is over. Magashule made this clear some time ago, so there wasn’t much chance of him doing an about-turn and implementing the party’s conference resolution, or its national executive committee decision, on himself, or anybody else.

His comrades could have asked him to stand aside, but they didn’t, which makes the whole meeting a bit of a waste of time and data.

I wonder what the meeting had to say after Magashule read out his love letter from the Hawks?

Or did they just sit, silent, avoiding making eye contact, until Ace turned off his microphone and headed off to the Free State and a Friday date with the National Prosecuting Authority?