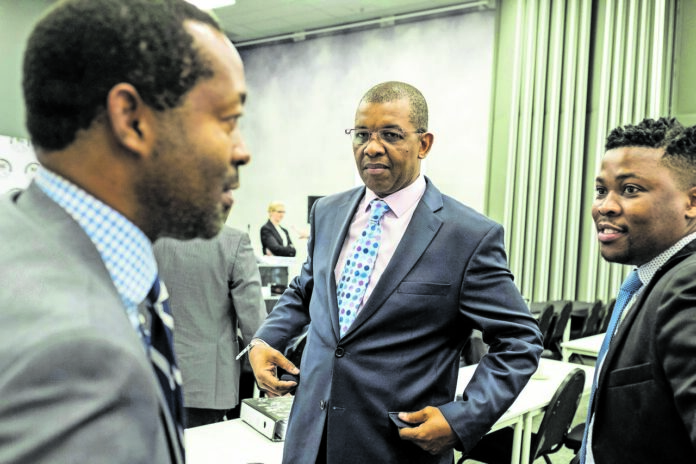 Sometimes a moment in the news cycle can reveal a lot about more enduring realities in our society. This week’s cross-examination of the minister of public enterprises, Pravin Gordhan, by advocate Dali Mpofu at the state capture inquiry provided several such moments.

It was difficult to watch the cross-examination because each of them condescended to the other and generally behaved like toddlers. Cross-examination is by design a robust mechanism for testing the veracity of the claims that a witness had made so one can and should make allowance for tension. That is not what was problematic about the exchanges. It is the fact that it often went beyond even the most unsavoury of textbook cases of such a process.

The display of anger simply demonstrated how our legal and quasi-legal processes cannot be separated from society’s larger battles against hypermasculinity. The adversarial character of our law is no excuse for what we witnessed. Mpofu and Gordhan took the “cross” part of cross-examination way too literally.

Putting the issue of tonality aside, there are aspects of the content of the exchanges that are disturbing and worth analysing. First, let’s pause over Mpofu’s racism analysis. He argued, among other things, that the use of the word “cheeky” is racist. He made the same claim about the phrase “Grow up, man!” The implication was that Gordhan’s usage of these words and phrases against his client, former South African Revenue Service commissioner Tom Moyane demonstrates that Gordhan is a racist bully who belittled Moyane.

Mpofu is overreaching and unconvincing on this score. Here is why. There are some words, like “kaffir”, that do not require contextual facts before we can know the usage of it is racist because of the unique history of that particular word. I honestly cannot see how anyone could find a context-defence of the word “kaffir”. Whenever that word is hurled by one person against another it is a racist linguistic vector that you are listening to in that moment. Literally the only obvious exception might be when the word, as I just did in this paragraph, is quoted for purposes of discussing it. Then you are pointing at the word rather than deploying it or hurling it. But when it is spoken as a speech act by one person against another, it is racist.

“Cheeky” is not in the same WhatsApp group. The word “cheeky” can be used in a racist manner. It can also be used in a non-racist way. It is one of those words that have multiple social histories and therefore you cannot know a priori whether the use of the word was racist. You need more facts about a particular case before you can draw a confident inference about that particular case. That is where Mpofu short-circuited his cross-examination.

A child that backchats can be said to be “cheeky”. In that context you are implying they are insolent, lacking respect, but you are not trampling on their inherent self-worth in any way, let alone racially. On the other hand, many white racists often referred to black people as cheeky because they resented our refusal to be deferential and experienced our assertiveness of our moral right to equality as “cheek”.

Many black South Africans have memory of the use of the word “cheeky” in that kind of way. Those are indeed racist instances of the word’s deployment.

But what Mpofu tried to do was to argue that the word is inherently racist. That is too strong. In the world of work where, rightly or wrongly, hierarchies prevail (let’s not pretend there are flat structures everywhere and that democracy has reached the workplace even between colleagues of similar age), someone may well feel their subordinate is cheeky and say so. That would not by itself be racist.

So Gordhan might well be a bully and could even be guilty of belittling Moyane. And those would be traits that would be vicious aspects of his character if they are true. But not every instance of viciousness counts as racism. Not every bully is a racist. Some simply are drunk on power and egomaniacs who may target an individual they do not like as an individual rather than because of their skin colour.

Mpofu showed no analytical finesse here, hurrying emotionally through the exchange, no doubt in part because of his own individual feelings about Gordhan.

The same goes for the phrase “Grow up, man!” This was even less cogent than the cheeky analysis. No one could seriously think that the phrase “grow up, man!” is inherently racist. I am not even sure it is worth deconstructing the fact that Mpofu was clutching at straws here. When tensions between two people run high and one says to the other that they are being childish and should “grow up!” it does not follow that just because the person being told to grow up is black that they are being, in effect, called “boy” in that more familiar and very precise racist use of the word “boy”.

Mpofu probably knows this because, even when armed with an exposition of micro-aggressions and not-so-subtle subtle racism (which he did not even bother offering the commission to sustain his view of Gordhan), the thin descriptions he read from the transcriptions of exchanges between Gordhan and Moyane does not get him to where he wanted to get to, concluding that Gordhan is racist beyond dispute.

So what might have motivated Mpofu to choose such poor lines of argumentation? Only one real possibility jumps out. We live in a country in which there are still a lot of unresolved conversations to be framed and had about relations between — to use awkward nomenclature to make the point — black Africans and Indians.

Mpofu was willing to sacrifice good legal arguments to play politics and to perform for the viewers at home, tapping these residual racial tensions. At that moment he was less Dali-the-lawyer than he was an Economic Freedom Fighters politician. That is dangerous and sad. He did not need to stoop to show up Gordhan for having no evidential basis for his main claims about Moyane.

But many South African politicians cannot help but exploiting our racial fault lines for expediency. Lawyers who work at the intersection of law and politics are no different to full-time politicians.

This brings me to the political hubris of Gordhan. He did not come out of the cross-examination looking great either. In a spectacular moment of inadvertent confession, he told the country that he happily relies on rumour and gossip to draw serious conclusions about Moyane including whether Moyane regularly met with the Hawks. Clearly, he had no evidence for this claim but kept pretending that there was some kind of complexity about the issue.

Gordhan was shamefully dishonest in this exchange. This was also the best part of the cross-examination from a legal viewpoint. Mpofu here shows the value of robust cross-examination. The veracity of the witness’s central claims was well tested. Gordhan’s first shame was not having sufficient integrity in that moment to say plainly: “I do not have direct evidence.” Truth, truthfulness, and evidence matter.

The second disappointment is Gordhan’s willingness to rely on gossip, because that raises the question of how, in general, Gordhan goes about making such calls in the course of his work. If gossip and rumours are used today, what about in other contexts? You do not expect of anyone in a position of authority, let alone a cabinet minister, to be so averse to evidence-informed decision procedures, especially when the stakes are exceptionally high for the state and for the person whose life and career will be altered by the consequences of the view you are forming about them.

The obfuscation shown by Gordhan when Mpofu tried to get him to admit — reasonably so — that he had no evidence for his view was really interesting. I have rarely seen the minister so angry, flustered and annoyed by questions put to him. This to me reveals another tendency in our society, that of politicians not enjoying maximum accountability. The misplaced expectation of not being closely examined that comes with being in the cabinet was neatly exposed. As citizens we are reminded yet again of the importance of never thinking of politicians as special. They are merely human, not superhuman, and must always be subject to accountability even if it annoys them.

Too many societies go awry by making politicians think they do us a favour to be in positions of authority over us. We need to insist on humbling the whole lot with both political and legal forms of accountability. It is easier to love accountability when Jacob Zuma is subject to accountability mechanisms than when you are subjected to it.

Mpofu and Gordhan are great South Africans, but this week was not their finest moment in the public eye. They have some introspection to do.

Zondo authorises summons for Norma Mngoma after she withdraws from testifying