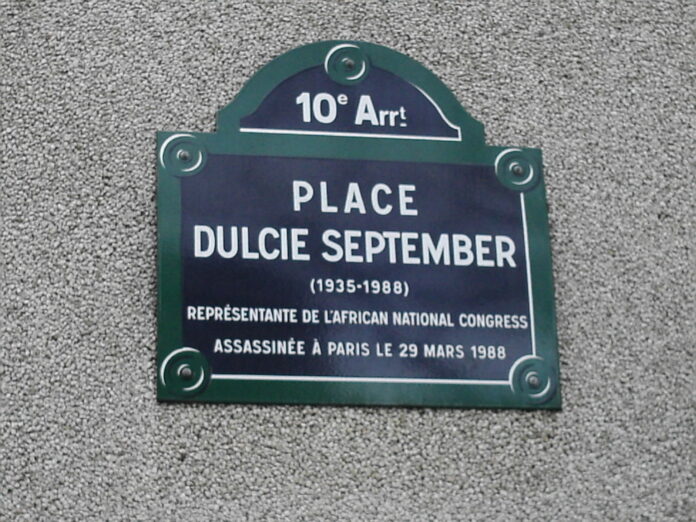 Of the two high-profile assassinations of the 1980s in Western Europe linked to apartheid South Africa, the murder of Swedish Prime Minister Olaf Palme in 1986 was only resolved in June 2020, while that of Dulcie Evon September, the ANC’s most senior representative in France, Switzerland, and Luxembourg remains an unsolved case. At the time, these two brutal murders were met with wide condemnation and, justifiably, inspired a wave of theories. At the heart of these theories was the role of apartheid South Africa and its intelligence agencies.

The making of a revolutionary reformist

Widely considered the father of modern Swedish social democracy, Palme was a proponent of social equality, world peace, and a welfare state. Born into an upper class family (Palme’s family includes communists and landowners), he was shaped by his early experiences, including studying in the US, where he witnessed deep economic inequality and racial segregation. Palme joined the Swedish Social Democratic Party in 1951 at age 24.

Palme was elected as Prime Minister in 1969, aged 42. Hailed as perhaps the most popular head of state in Sweden’s history, Olof’s was described as a “revolutionary reformist.” He fought to establish Sweden as a radical welfare state, built upon the foundations of a good life for all. This formed the basis of his politics. His socialist politics and radical policies were met with resistance from Swedish capitalists. His radical opposition to the Vietnam War and apartheid South Africa made him an international hero––particularly in the global South.

On  Friday 28 February 1986, he was fatally wounded by a single gunshot on a central Stockholm street, while walking home from a cinema with his wife Lisbeth. Palme insisted on living like an ordinary Swede, walking around the city and catching public transport. What ensued was one of the biggest and longest criminal investigations in history.

One of the theories surrounding Palme’s death pointed to apartheid South Africa’s involvement. On February 21, 1986, a week before he was murdered, Palme made the keynote address to the Swedish People’s Parliament Against Apartheid, a two-day event held in Stockholm, attended by hundreds of anti-apartheid supporters, as well as leaders and officials from the ANC and the anti-apartheid movement, such as Oliver Tambo. In the address, Palme declared, “Apartheid cannot be reformed, it has to be abolished.”

A decade later, in September 1996, in the early years of South Africa’s transition to democracy, Colonel Eugene de Kock, a former South African police officer and member of a secret apartheid death squad based out of the Vlakplaas farm, gave evidence to the Supreme Court in Pretoria. De Kok alleged that Palme had been killed because he “strongly opposed the apartheid regime and Sweden made substantial contributions to the then banned African National Congress (ANC).” The motive for the assassination was to bring an end to Swedish support for the ANC.

The investigation into Palme’s murder abruptly ended in June 2020, when Swedish chief prosecutor Krister Petersson announced his conclusion that Stig Engström, also known as the “Skandia Man” and who took his ownn life in 2000, was the most likely assassin.

“My visit to France would be incomplete if I have not come here (Arcueil) to honour the memory of Dulcie September and see the college that carries her name.” These words are from President Nelson Mandela’s tribute to September, on his historic visit to Arcueil in the Val de Marne, the Parisian suburb where Dulcie resided from her arrival in 1982. Mandela’s visit in July 1996 coincided with the annual anniversary of the Storming of the Bastille (July 14, 1789), the turning point of the French Revolution.

Within the confines of the small ANC office on the 4th floor at 28 Rue de Petites-Ecuries, September worked tirelessly, despite meagre resources, to mobilise opposition to apartheid in Europe. In France her mission was dependent on contacts with leftist trade unions and sympathetic groups, such as Oxfam, Amnesty International, the French trade union federation, Confederation General du Travail (CGT), the anti-racist Mouvement Contre le Racisme et pour l”Amitie entre les Peuples, and the communist-aligned women’s organisation, l’Union des Femmes Francaises. The late Reggie September (not related), who completed a three-month military and intelligence course with her in Moscow, Russia, in the early 1980s, noted that Dulcie September had made huge strides toward exposing the illicit arms trade between France and the apartheid regime.

“The last few years she lived in constant fear of harassment, assault, and death,” according to Ruth Lazarus, herself an expatriate and close friend, whom September had visited the weekend before her death. “Dulcie était misérable, lamenting how she misses her family and friends, Table Mountain and the fish and chips parcel she would usually buy on a Friday.”

On the terrible morning of Tuesday 29 March 1988, September was assassinated as she was opening the ANC office after collecting the mail. Her funeral turned into a huge anti-apartheid demonstration, a manifestation of solidarity with the ANC. More than 20 000 mourners paid their last respects to September and marched to the Pere Lachaise cemetery—the scene of the last armed resistance of the Paris Commune of 1871. “If ever there was a soft target, Dulcie September was one,” Alfred Nzo wrote in tribute to her in the May 1988 edition of Sechaba, an official publicity organ of the ANC. Nzo claimed that Dulcie died at her post as honorably and with as great a dignity as any fighter who falls on the battlefield. “That is the memory of her that we must always cherish,” Nzo pleaded.

The careless and rushed French investigation into the assassination of September was the result of one of the most blatant frame jobs in French/apartheid South African history. Among the damning indictments of France’s blatant betrayal of the struggle against apartheid came from Jacqueline Derens, a member of the French anti-apartheid movement, who worked closely with September: “The sanctions against South Africa were supposed to be compulsory, as ruled by the UN, but our government was not implementing them. We were incredibly angry, but we were just a group of activists fighting against money and power.”

It is no secret that there was a powerful pro-apartheid lobby in France at the time because France were selling petrol and arms as exposed by Hennie van Vuuren in his superlative account of the vast illegal trade that sustained apartheid — Apartheid, Guns and Money. The same arms were used by the South African army and police to kill those that resisted apartheid in South Africa and beyond.

This article was first published on Africasacountry.

Raymond van Diemel
Raymond van Diemel is a historian. He is the author of In Search of ‘Freedom, Fair Play and Justice’: Josiah Tshangana Gumede, 1867-1947: A Biography.
Facebook
Twitter
WhatsApp
Linkedin
Email
Telegram

Aced: ANC secretary general suspended from the party for the duration of his corruption trial

Magashule and parliamentarians will continue to receive cushy salaries during suspensions

A lot of words that say little