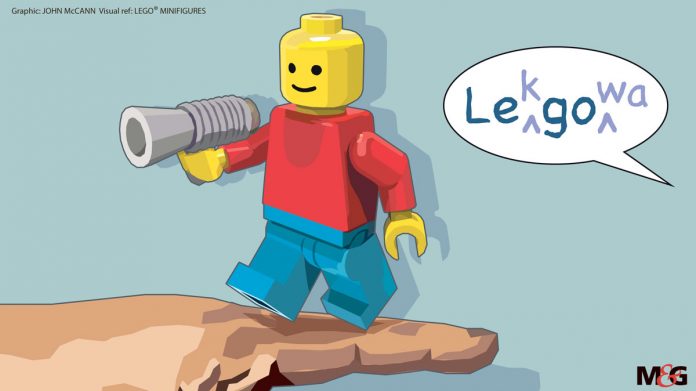 I’ve committed to mastering Sepedi if it kills me. This morning after my run, I approached my domestic worker and demanded she teach me a most useful phrase that I would like to share with you; please practise it: “Ema! Mpšha yaka! E ka se lome!”

This thing with dogs is not a joke.

I’ve been accused of minimising the impact of apartheid for telling this next story. Perhaps in my first attempt I was ungentle; I didn’t have an editor then. I’ll try again.

In 1987, I was 11 years old, and my white family — my father was a priest — had just moved to the black township of Atteridgeville, the other side of Wespark, Pretoria. Our arrival greatly confused the assembled masses, who had not anticipated we might be equally as poor as they were. Perhaps they’d been misled by seeing the manner in which God blessed so many of His more important servants.

But they were greatly encouraged when, after the most merciful bath I have ever had, we sat down and ate traditional food with them in the proper way.

There is a skill to eating with your fingers that is surprisingly difficult to master. If you are proficient, both your fingers and lips should remain clean throughout the meal; occasional use of a napkin is permitted. You can tell when you’re doing it wrong by the looks of growing horror in the faces of the people around you.

I have never truly got the hang of it, though not for want of trying. In my case, it is always, “please have a spoon.” When you are eating pap en sous, and someone offers you a spoon, it means you eat like a pig and you are making everyone nauseous, so please for God’s sake take it.

By eating with us, the parishioners learned that we actually enjoyed the food that was offered to us, and we were willing to at least attempt to respect the customs, if kak-handedly. And so the first wall began to crumble.

It went differently with the kids. My darling mother, seeing a wonderful opportunity for her children to integrate, threw our doors wide and an unregulated mass of inquisitive children from all over the entire region poured into my bedroom. They poured out just as quickly, absconding with most of my toys.

Now, it’s been suggested to me that this outcome was completely predictable for a very specific reason. I’d agree it could have been foreseen, but I disagree with why.

Everything I had was given to me. I was clothed in the same secondhand donations that the mission station where we had lived distributed to the people it served. My siblings and I received our private school education for free, through the charity of German nuns, and by the grace of chance encounters. I never had any idea we were poor; I had everything I ever needed.

We had come from the poverty of rural KwaZulu-Natal, to the poverty of the urban township. This poverty had a different flavour to it; more desperate, and that desperation was only amplified by the sheer population density. It did not matter to those kids that most of my stuff was battered and passed down: I had so much more than they did.

Yes, it was predictable, given the need. I reject the other explanation utterly.

The incident also led to the single most excruciating moment of humiliation in my entire life thus far.

My mother began limiting playdates to kids from the immediate hood, and a child (vetted, mother met) had come to play with my little sister. They’d had a fantastic time, with much giggling and shrieking of the kind an 11-year-old finds so annoyingly immature.

But after the child had left, my little sister discovered that a little Lego figurine — one of her favourite companions — was missing. A thorough search did not produce it. It seemed obvious what had happened, given that it had happened so much already. This time it would not stand.

My mother decided that the best way to handle it was straight up, mom to mom, and so we marched down the street, my mother, my little sister and I, with a growing crowd of onlookers, as tended to form behind us in the early days, when we were still new and full of mystery.

We arrived at the corner house, and the mom came out with most of her family. My mom explained that the woman’s child had taken her daughter’s Lego man, and could we have it back please?

The woman called for her child, and asked if this was true. The child vehemently denied it. This produced a face-off, because my mom had had enough of her kids being ripped off.

And just as she was winding up, my sister produced the little minifigure from inside her pocket: “Yaaaaaaaay, I found it!”

A white woman had just stepped up to a black woman’s house, and called her child a thief, unjustly, to her face. This was so much worse than having a racist dog could ever have been.

The woman regarded my mother for a moment, and then said simply, “Lekgowa”.

I had heard the word many times, called out by children in the distance every time we left the house and walked those streets. But until that day, I had never noticed how the tone in which it is delivered affects the meaning.

But some things are hideously embarrassing in all cultures. Once everything had subsided, I believe a rumour began to circulate. I believe that as a result of that rumour, some moms had a look at whether there was anything new in their child’s bedroom. I believe that in at least some cases, brisk and distressing violence then ensued, most likely delivered with a sandal.

The response wasn’t universal across the neighbourhood, but I’m pretty sure it was universal on our block, and before long certain items started to make their way sheepishly back.

Not even poverty defines who you are.

A legal response to Stalingrad tactics that avoid accountability