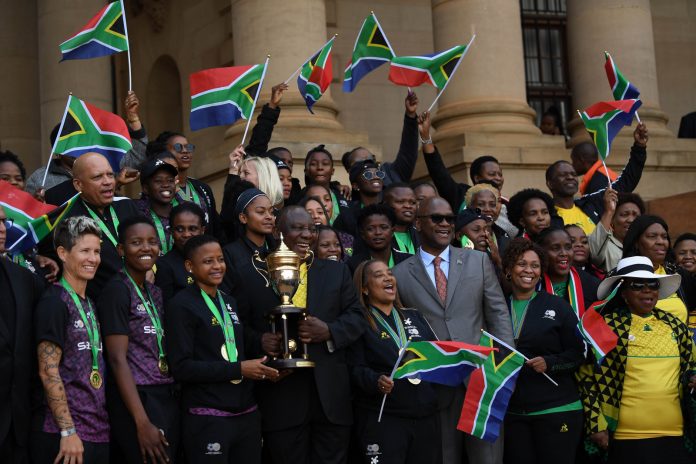 As I watched Danny Jordaan and Nathi Mthethwa, with their wolfish grin-etched faces standing on a stage at Banyana Banyana’s welcome home celebrations, I couldn’t help but hope that someone from the gathered crowd would hurl a squealing piglet at the two men for undeservedly basking in the national women’s football team’s triumph.

Mthethwa and Jordaan spoke on 26 July during Banyana Banyana’s return party at OR Tambo International Airport after the team won the Women’s African Cup of Nations in Morocco while I tried my best not to choke on my peanut butter and jam sandwich.

To give context, tennis legend Billie Jean King gave former champion and self-proclaimed male chauvinist Bobby Riggs a squealing pig at a press conference ahead of their renowned “Battle of the Sexes” tennis match in Texas, United States, in September 1973.

King crushed Riggs and won the match in straight sets.

A few months before the showdown, King fulfilled her life-long dream of eliminating the yawning pay disparities between men and women players by becoming the Women’s Tennis Association’s (WTA) founding president and raising the level of income for

Riggs, who was 26 years King’s senior at the time of their 1973 match, played elite women tennis players of the time because of his belief that men were better athletes and should continue earning more than women, making disparaging remarks such as “women belong in the bedroom and kitchen, in that order”.

Today, however, the formation of the WTA has ensured that men and women earn equal prize money at all four of tennis’s Grand Slam tournaments.

Which brings us to Jordaan, who is an ANC municipal deployee and moonlights as the South African Football Association’s (Safa) president.

Mthethwa, on the other hand, is the country’s minister of funerals and monuments, and sometimes opines on sports-related matters.

This is according to this column’s real owner, Paddy Harper, who graciously ceded his space this week for me to scribble this drivel, which will surely fill my inbox with threats of the now-standard R500 000 defamation lawsuits akin to the one that Twitter’s favourite engineer and my hypothetical uncle, Matshela Koko, made against me in late 2020.

Jordaan and Mthethwa — like uncles inside a squawking Katlehong shebeen — yelled through a chorus of boos from the crowd to pontificate about how Banyana Banyana deserved to be paid the same as the country’s favourite “bunch of losers”, Bafana Bafana, the national men’s team.

What the pair did not tell the nation was that, in May, Jordaan’s South African Football Association doled out “outlandish” R520 000 bonuses to each of the 40 national executive committee members on the eve of the organisation’s June conference (at which he was re-elected president of Safa) for an alleged job well done.

What that good work was was not necessarily made clear because Safa’s flagship asset — which, believe it or not, is still the bumbling Bafana Bafana — will again be watching this year’s Fifa World Cup on television after failing, for the umpteenth time, to qualify for a major tournament.

According to South African football legend Portia Modise, in an interview with sports broadcaster Robert Marawa, Safa failed to pay the Banyana Banyana players who won the Confederation of Southern African Football Associations Cup in November 2020.

This is despite Safa paying Bafana Bafana players R520 000 each for bombing out of the quarterfinals of the African Cup of Nations tournament in 2019.

Yet Jordaan, who is revelling in his new-found feminism, believes that the R400 000 in bonuses that Banyana Banyana players will each get for winning a tournament shows Safa’s commitment to gender equality.

Yes, I’m about to choke on this peanut butter and jam sandwich.

And don’t get me started on Mthethwa, who rocked up with a R5.8-million government cheque for the women’s team to share, as if he had not just tried to “power his erection” of a R22-million flag that would have surely done wonders for the development of sports in South Africa.

Again, these are Paddy Harper’s words, not mine. Please sue him and not me.

And, while you’re at it, why don’t you hurl a squealing piglet the way of Jordaan and Mthethwa when you see them.