PODCAST: How members of the ANC were pivotal to the conceptualisation of the EFF 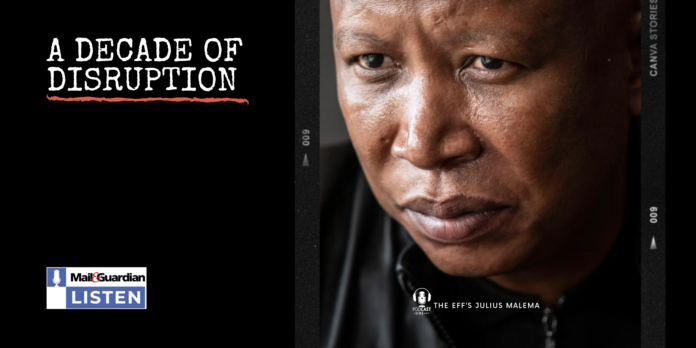 This time 10 years ago, Julius Malema seemed to have no more cards left to play following his expulsion from the ANC. 10 years later, Malema, 40, is “in a much much better position”.

How did the genesis of the EFF pan out? We find out what the events leading up to Malema’s leave from the ruling party were and how he, along with Floyd Shivambu and now-ANC national executive committee (NEC) member David Masondo conceptualised the EFF based on shared ideology.

The EFF has since made its name as a party that courts disruption and controversy with, among others, its refusal to respect collegial parliamentary traditions.

Water under the bridge – how does the EFF commander-in-chief view former president Jacob Zuma since his expulsion?

“I believe that the highest punishment you can give to a president is to remove them from office before they complete it. They get bitter to the grave. They never heal from that.  You can see from Thabo Mbeki. He has never healed from that,” he said. “When we removed Zuma from office [in 2018] that was the end of it.”

We also chat about president Cyril Ramaphosa, who was part of the disciplinary committee that decided to expel him all those years ago and what Malema thinks of him today.

“I think that I may be in a better space. I’m a principal now, so why do I want to be a teacher? I’ve got a promotion. So I’m fine. I’m at the same level as Cyril.

What kind out of impact does the EFF and its leader Julius Sello Malema have on South African politics?

Get the details and don’t forget to react and leave us a thumbs up when you’re done listening.

Subscribe to Mail & Guardian for just R510 for the first year. That’s just R42.50 a month, and you can cancel anytime.

We need to reimagine South Africa without the ANC and if we do not, we will either live with false hope or the country’s crisis will intensify

How did the iconic master painter Louis Maqhubela change the game in the 1990's and how did he pave the way for artists today with his 'transformative' art?