Why the ANC clean-up is dragging on 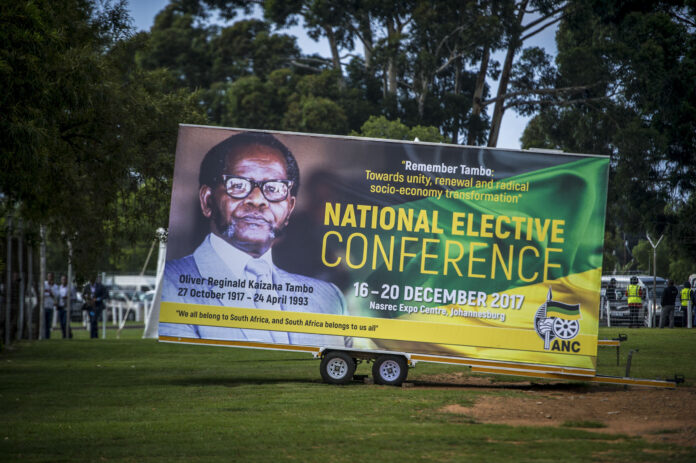 ANC structures have already started compiling lists of members who have been convicted and those facing criminal charges.

This will allow the party to follow through on its commitment to tackle corruption in its ranks. But party sources say we shouldn’t expect anything to happen soon. There remains the prickly issue of how to handle people who hold political and government offices and who face allegations of serious corruption but who have not been formally charged.

A national executive committee (NEC) member said branches and regions are already fighting about whose name should be on what list: “What came out of the NEC meeting might take some time. We are concerned about certain people abusing law enforcement to get people they don’t like on the list.” The member said people “will fabricate charges” and force the ANC to make decisions when members might be innocent.

The NEC is the highest decision-making body of the ANC.

As a first step, the party is waiting for provinces to send their lists of convicted, and charged, members to its national working committee.

Another senior NEC member said that as it stands, there is no explicit requirement that anyone accused of serious misconduct should step down.

“Where there are no legal proceedings but there are issues the integrity committee feels may impact on the party, the test the committee uses is the Mangaung test of serious disrepute.”

The member, however, admitted that there is a problem — the party has not defined what constitutes a punishable level of disrepute.

There is also a bigger problem: the party has not resolved the issue of party members who have serious allegations hanging over them, but have not been formally charged.

The NEC member said this is specifically important in regards “to comrades such as [secretary general] Ace Magashule, who has never been charged but is reputationally toxic”.

This seems a near-impossible predicament for the party. Instead, members are hoping that the state, through entities such as the National Prosecuting Authority, will speed up its cases.

Battle in the provinces

In the provinces, the dilemma continues. KwaZulu-Natal ANC provincial spokesperson Nhlakanipho Ntombela said officials had met with regional secretaries and chairs to discuss how to manage the process. They were also concerned about how to deal with issues of members who only face allegations, yet not charges. “We are looking at how we assist or facilitate […] the integrity commission deal with those cases.”

By the time of going to print, Mike Mabuyakhulu was the only one of the corruption-accused officials in KwaZulu-Natal to face consequences when he declined nomination to the list of candidates for Parliament, though he is still the ANC deputy provincial chair in the province. No one had stood down voluntarily.

“Nobody has done it yet. We will start getting the reports from the regions as there are councillors, for example, who have been convicted of fraud and have paid fines. Those will be added to the list,” Ntombela said.

“As Durban branches, we are critical of decisions that are difficult to administer and which might have unintended consequences, given that we are going to conferences and the high level of factionalism in the organisation,” Dube said.

“A person can now be removed from a leadership contestation based on merely being charged, whether those charges have substance or not. This is open to abuse.”

The Umkhonto weSizwe Military Veterans Association, which had called for an investigation into President Cyril Ramaphosa’s campaign funds ahead of the meeting along with Eastern Cape heavyweight Andile Lungisa and other backers of Magashule, said it would only comment on the NEC decision after it meets with the ANC top six.

Its spokesperson, Carl Niehaus, said they “do not want to engage publicly on the issues we want to raise. Only after we have that meeting would it be fair for us to give expression to what our views are.”

A tough weekend at the NEC

A Gauteng party member said the NEC meeting was tough for both Magashule and Ramaphosa camps.

His view is that despite reports Ramaphosa has been strengthened, the president was “against the wall”.

The member said, “It is ‘ordinary members’ of the NEC who want answers from Ramaphosa on the financial conduct of his 2017 campaign. Hence the president has to speak to the integrity committee.

“Ace, on the other hand, has been invited to appear before the committee to explain comments made in a ‘wide-ranging interview’. In the absence of any serious charges against him, Ace is unlikely ever to step down from his position.”

Will anyone step down?

Meanwhile, in Parliament, the ANC caucus said it knows of no MP who is preparing to resign.

Asked whether the party would enforce the directive that MPs facing criminal charges should resign, ANC caucus spokesperson Nomfanelo Kota said that would be a matter for the party’s leadership to clarify.

“The ANC’s NEC took that decision. It was not the chief whip. If an MP deployed by the ANC resigns, their first port of call when tendering their resignation will be to the deploying authority, Luthuli House.”

There is also still confusion on what exact basis MPs and public officials would be asked to step down, and whether this will be limited to corruption-related charges.

The ANC’s caucus met on Thursday and Kota said the issue of resignations was scheduled to be discussed.

There are no express rules that govern whether an MP can step aside temporarily, take a leave of absence, and yet retain their seat in the National Assembly or National Council of Provinces, because political parties regulate MPs’ attendance and requests for a leave of absence.

It’s clear as mud, but here are some who may face the cut

While corruption-accused former mayor Zandile Gumede and ANC deputy provincial chair Mike Mabuyakhulu are the most high-profile party officials in KwaZulu-Natal who will likely be asked to step aside from their posts, many others have been convicted of corruption, fraud and other offences.

In the eThekwini region, ANC chief whip Mondli Mthembu was arrested along with Gumede and four other councillors over the nearly R400-million Durban Solid Waste tender, for which the city paid contractors who never delivered services. During their bail application, investigators told the Durban commercial crime court that as many as 60 ANC councillors were believed to have received bribes from contractors involved.

Other names in KZN include Bongekile Dlamini, Zamambo Mkhize and Nomalungelo Magoso, who has also been found guilty for fraud.

Home Affairs committee chairperson Bongani Bongo was absent from Parliament this week. He was minister of state security under Jacob Zuma’s presidency and faced charges of bribery and corruption in the Western Cape high court. The charges relate to how he allegedly tried to bribe parliamentary legal adviser Ntuthuzelo Vanara with a blank cheque during parliament’s 2017 inquiry into state capture. Bongo is out on bail.

National Assembly speaker Thandi Modise faces animal cruelty charges in the Potchefstroom regional court. The offence relates to her allegedly leaving her North West farm unattended, causing the death of more than 50 pigs and other animals, five years ago.

There’s also Mosebenzi Zwane, the former minerals minister, now chairperson of parliament’s transport committee. Though he hasn’t been charged, he is implicated in the Vrede dairy project probe. Meanwhile, another ANC personality that could be affected is Nelson Mandela Bay councillor Andile Lungisa. In 2018, Lungisa was convicted of assault. Two years earlier during a brawl in the council chamber, he hit Democratic Alliance councillor Rano Kayser over the head with a glass water jug. He was sentenced to two years in jail but is currently appealing the conviction and sentencing. He told the Mail & Guardian that despite his conviction, he would wait for instruction from his party on whether he should stay or go. He said the procedures on who should resign from the party and who should stay had not been ironed out yet.