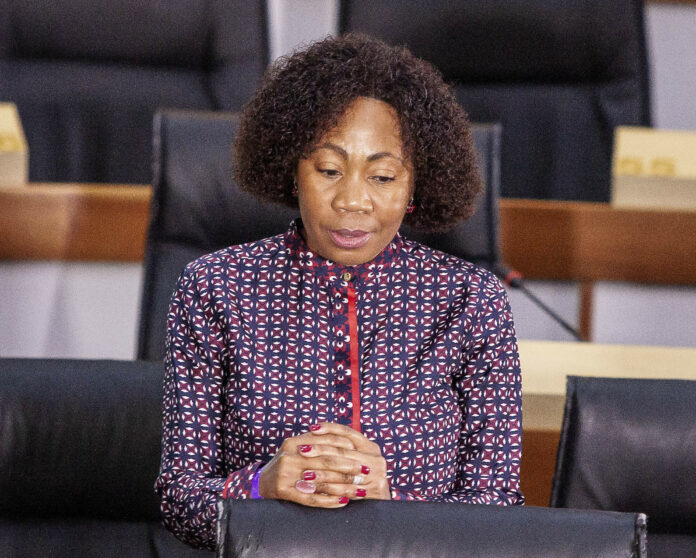 Former acting public enterprises director general Matsietsi Mokholo on Thursday told the Zondo commission that in early 2015 then-president Jacob Zuma instructed her to order the postponement of an Eskom board meeting.

Testifying that the conversation with the president left her deeply uncomfortable, Mokholo said Zuma told her to call Eskom chairman Zola Tsotsi on the eve of a board meeting scheduled for 26 February 2015 and demand it be postponed.

The president did not provide reasons for the instruction, Mokholo said when pressed by evidence leader Pule Seleka and commission chairperson Deputy Chief Justice Raymond Zondo.

“No, just inform the chairperson that he must postpone the meeting and await further instructions from his shareholder minister,” Makholo said the president told her.

Mokholo, who is currently a deputy director-general in the presidency, said she did not interpret the message she was told to relay to Tsotsi as a request but rather as an order from Zuma.

Mokholo said she tried in vain to reach then public enterprises minister Lynne Brown, who was travelling abroad, in the hope that she would impress on Zuma that his call created a dilemma, because it was not the place of the department to dictate the timing of board meetings.

“It had nothing to do with the department, it was in the purview of the board,” Mokholo said.

Eventually, she called Tsotsi and asked that the meeting be moved to another date, without attributing the request to Zuma.

But Tsotsi was adamant that the meeting could not be moved, because board members were travelling from different corners of the country, and he demanded an explanation.

“Then I said to him: ‘Chairperson, this is very difficult, the president has requested that the meeting be postponed.’ He just said ‘okay’, and then the conversation ended,” Mokholo said.

Zondo asked whether it was fair to say that Mokholo did not want to tell Tsotsi that Zuma had anything to do with her phone call unless “unless pushed into a corner”, and she replied that this was correct.

Tsotsi’s own testimony to the commission, however, stated Zuma had called him earlier in the day and told him that he would receive a phone call instructing him to postpone the board meeting.

Mokholo’s testimony suggested that the president may have intended Brown to convey the message because he opened the conversation by asking where the minister was, because he had been unable to reach her.

She said she informed Brown of Zuma’s instruction when the minister returned to South African but her only response was “Eish, Matsietsi”.

“I would not even know whether she had the reasons from the president or spoke to the chairperson. It was very clear that this was not a conversation she was going to have with me,” Mokholo said.

What went down at the meeting

The Eskom board meeting, which finally took place on March 11, culminated in a decision to sideline four senior executives, among them the chief executive at the time, Tshediso Matona, and paved the way for the secondment of Brian Molefe and Anoj Singh from Transnet to the power utility.

The other three executives who were suspended were Matshela Koko, then head of technology; finance director Tsholofelo Molefe; and the head of group capital, Dan Marokane.

Brown attended the meeting and championed the suspension of unnamed executives, pending a “deep dive” investigation into Eskom’s persistent generation woes. The minister also complained about coming from “another frustrating meeting” with the Eskom war room, set up to steer the entity out of load-shedding, and raised the possibility with board members that the recurring blackouts the country endured were the result of sabotage, not poor infrastructure.

Mokholo pointed out that on that day, there had been no meeting of the war room. She said during the meeting she sent notes to Brown suggesting that they leave, because they had no place in operational discussions. She added that although the minister eventually agreed, she perplexingly undertook to remain close at hand in case the board needed to call her back.

“The bottom line is the minister was involving herself in operational issues: that is why you kept giving her notes to say you should leave?” Zondo asked.

He also questioned Mokholo about how it became clear that Molefe, the finance director, would be among those suspended.

According to Tsotsi’s earlier testimony before the commission, he had been informed of plans to suspend Montana, Koko and Marokane. Former South African Airways chairperson Dudu Myeni would effect this at a meeting at Zuma’s home on March 8.

Zondo tried to establish whether Salim Essa, a key associate of the Gupta brothers at the centre of the state capture scandal, had met with Brown in the run-up to the board meeting, but Mokholo said she did not know.

According to Tsotsi, Koko had been aware of the plan to suspend him and the others and had been informed by Essa.

Koko, who was subsequently reinstated and later promoted to chief executive, has vehemently denied this. Various witnesses have suggested that his suspension was a ploy to lend legitimacy to the unwarranted sidelining of the other three.

Molefe was due to testify before the commission on Friday. He has been intricately linked to the Gupta family and the stranglehold they exerted on Transnet and, later, Eskom. Zuma has been summoned to take the stand from Monday to Friday next week.

Singh has been instructed to submit an affidavit responding to allegations against him to the commission on Monday, after missing earlier deadlines. He was due to testify on Wednesday, but Zondo agreed to call him back at a later date after the commission, in a sloppy mistake deplored by the judge, issued a defective summons.

In his four turn on the witness stand, the former Eskom CEO maintains he was tricked into sharing company information with a third party
National