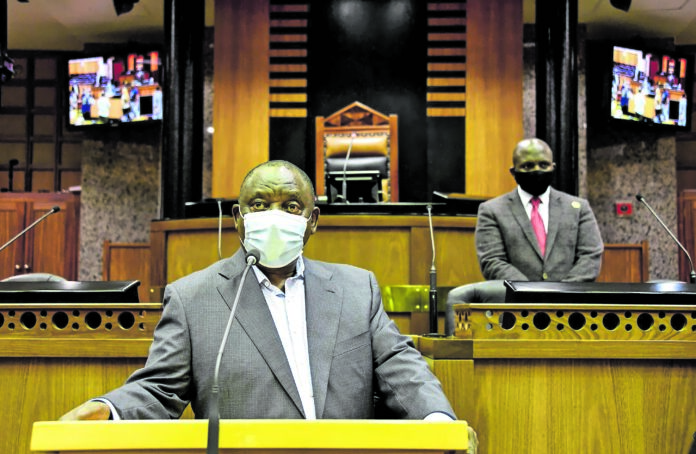 President Cyril Ramaphosa’s 2021 State of the Nation address may have laid out a broad recovery programme for South African, but its implementation is likely to be undermined by the systemic corruption in the government and the private sector.

Rebone Tau, programme manager of political affairs at the Rosa Luxemburg Stiftung, said that although Ramaphosa had spoken of ways to address corruption, it would be difficult to implement because of the inability to act against it within the state and the governing party.

He added that the personal protective equipment saga involving his spokesperson, Khusela Diko, and the general looting of PPE funding made a mockery of his rhetoric.

Dealing with corruption was a “slogan” with little real progress being made in terms of halting corruption and bringing to book those responsible for it.

“We are not seeing any results in terms of corruption. The reality on the ground is different. Money is still being looted, which is even worse under the difficult economic circumstances of the last year,” Tau said.

He said the looting of service delivery projects on an ongoing basis made it clear that the developmental projects, particularly regarding water, would be undermined by corruption.

“We are going to local elections. It is correct to emphasise that civil servants should work hard, but is just to be seen as a message to South Africans to get votes for the governing party,” Tau said.

“It was a good speech, but the problem is the reality on the ground.”

Angelo Fick, the director of research at the Auwal Socio-Economic Research Institute, said the president’s focus on the need to deploy capable people to local government was “an interesting thing to say” but that the ANC’s cadre deployment policy would undermine it.

The impending local government elections meant that cadre deployment would be “at its strongest”, with cadres called upon to generate votes for the governing party.

This would make it impossible to get rid of them and replace them with more suitable candidates for the jobs at hand, he said.

South Africans, Fisk said, wanted both concrete and symbolic action regarding corruption, with the corruption by people in Ramaphosa’s own office making this all the more necessary. “If we want to clean up municipal chambers we cannot have it that there are different standards being applied to people who happen to be close to people in the executive, or the president himself.”

He said the implementation of the details in the four focus areas outlined by Ramaphosa would be difficult because of the low capacity of the weakened South African state.

The president also focused on expanded energy generation as his fourth key priority for the year. But this read more like a to-do list leftover from last year — and earlier still.

In his fifth state of the nation address, Ramaphosa said 2 600 megawatts of wind and solar energy would finally be procured as part of the government’s bid window five in the next few weeks, followed by another round in August.

Anton Eberhard, who heads the Power Futures Lab at the University of Cape Town Graduate School of Business, noted that the Integrated Resource Plan envisioned that the fifth bid window would follow immediately after the fourth, which was launched in 2014 but delayed by the machinations of Brian Molefe and Matshela Koko at Eskom.

Ramaphosa unlocked that process in 2018. Power-purchase agreements were signed, and most of these projects are now connecting to the grid.

With dire power shortages plunging the country back into load-shedding last week bid window five remains yet to be launched, despite promises from Mineral Resources and Energy Minister Gwede Mantashe to do so in December.

Eberhard termed the seven-year hiatus between the two bid windows “disastrous” and welcomed the launch of round five in the next month or two. “[But] the IPP [independent power producers] office in the meantime has its hands full adjudicating the current emergency 2 000MW risk-mitigation IPP round.”