Zuma pleads not guilty, Mpofu puts the NPA on trial

Former president Jacob Zuma on Wednesday pleaded not guilty to all 16 charges stemming from the arms deal after forcing a delay of at least two months in the trial that has been almost two decades in the making.

State prosecutor Billy Downer told the high court in Pietermaritzburg that the parties have agreed that an application seeking his removal from the case would be argued at the first available court date after the mid-year recess, July 19.

The delay is necessary to allow the state to draft an argument in response to the plea in terms of section 106(1)(h) of the Criminal Procedure Act that Zuma’s legal team filed last week.

In essence, Zuma is arguing that Downer is deeply compromised, both by his own alleged bias and political manoeuvring regarding the case by the Mbeki administration, and hence does not have title to prosecute the matter.

Downer told Judge Piet Koen that the application, though it runs to more than 1 000 pages with attachments, was incomplete in parts. The defence has agreed to supplement it.

“And might I just mention, My Lord, one further problem, and that is that we have pointed out to my learned friends for accused number one that their papers in certain respects are insufficient and incomplete, so we have given them a list of what we think is incomplete and how it needs to be supplemented.

“So that has still not been done, although I understand my learned friends are at work in doing that and we have provided certain information to them which we had, or we are happy to provide that to them to assist them but nevertheless the papers are not absolutely final.”

Koen added that the papers are not indexed or paginated and asked Zuma’s lawyers to ensure their juniors saw to this.

The state has briefed counsel to draft its reply since the veteran prosecutor cannot do it because he is the subject of the plea. The counsel includes Wim Trengove SC.

Zuma arrived at court with advocate Dali Mpofu as his new lead counsel, replacing Muzi Sikhakhane with whom the former president parted ways acrimoniously in April. Mpofu is representing suspended ANC secretary Ace Magashule in his application to overturn his suspension and instead validate his own attempt to suspend President Cyril Ramaphosa as leader of the party.

Ramaphosa and the ANC have briefed Trengove to respond to the application.

Magashule was at the court in Pietermaritzburg on Wednesday, and told reporters: “Former president Jacob Zuma, I will always support him.”

Zuma’s papers plead that if the court agrees that Downer should be removed, the court should acquit the former president on all charges — two of corruption, 12 of fraud and one each of money-laundering and racketeering. 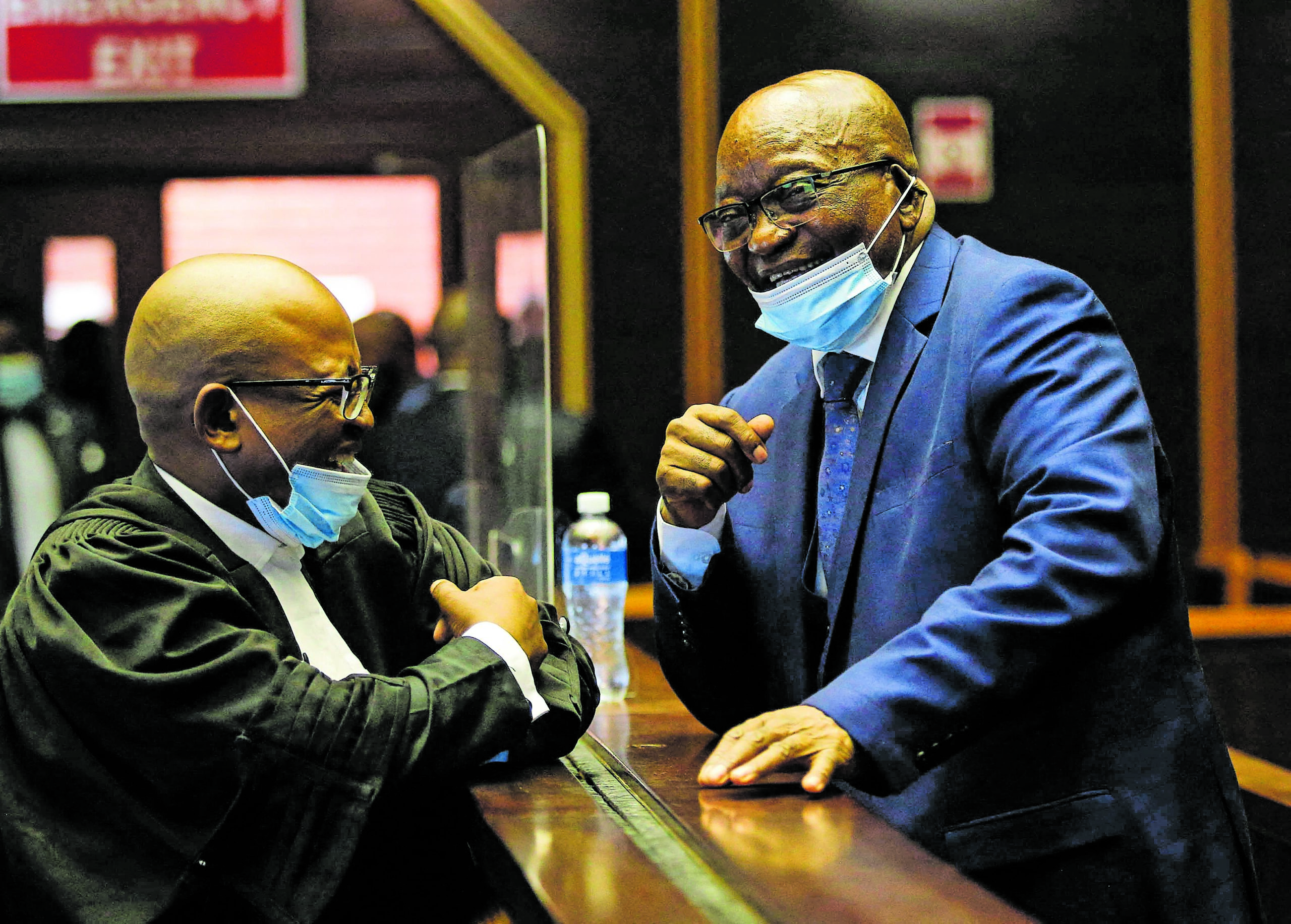 “In the event that Downer SC is removed, I am entitled to be acquitted in terms of section 106(4) of the CPA [Criminal Procedure Act] because my trial cannot be conducted fairly in accordance with the Constitution under the circumstances.”

Mpofu played to the gallery by insisting on quoting at some length from Zuma’s affidavit attached to his plea, although Koen demurred that he had read the document and asked him to keep his reprisal short.

He went straight to the argument that Downer had made himself a witness in the matter by filing an affidavit in support of the Democratic Alliance’s ultimately successful court battle to review a decision in 2009 by the National Prosecuting Authority (NPA) to withdraw the charges.

According to Zuma’s submission, Downer belongs to a faction in the NPA that believes political interference in cases should be “tolerated”.

“The accused is of the strong view that his rights to a fair trial is what is at stake … Mr Downer SC has lost his independence.”

Downer would notably not allow the defence to submit evidence of political interference in the case, he added.

Mpofu went on to argue that the NPA and Downer had effectively breached the law in their handling of the matter and should face the consequences.

Koen interrupted him after some 40 minutes, saying the court now clearly understood the basis for the former president’s plea and it could be argued on the return date.

“Probably no more is required … I think that what is the purpose of you addressing me has been achieved,” the judge said.

Zuma is accused of taking inducement from French arms manufacturer Thales to shield it from investigation into improper dealings in securing a contract to supply the South African navy with combatting systems. The company, accused number 2, also entered a not guilty plea on Wednesday.