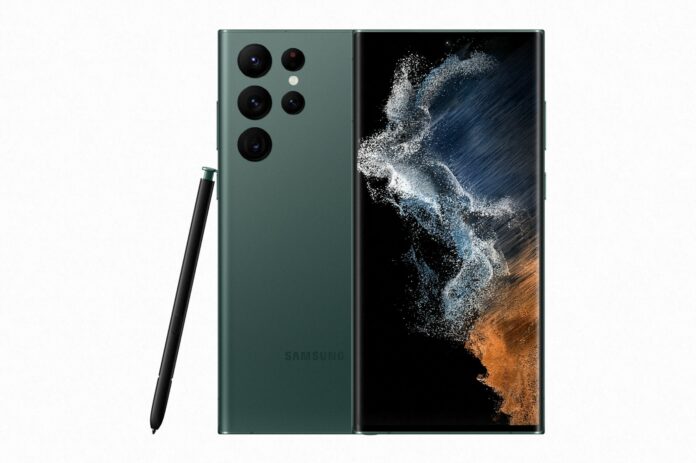 The Galaxy S22 Ultra is essentially a Galaxy Note reborn. Samsung’s unique phablet with built-in stylus was notably absent from its 2021 line-up but returned in 2022 in the form of an S Series flagship.

The S22 Ultra remains the only handset with a built-in S-Pen combined with Samsung’s best-in-class photography, performance, and tools for productivity. Previously, the top-of-the-range “ultra” on the S Series was difficult to justify but makes sense now that it offers something unique when compared with the S22+ and S22.

The phablet by default has a large 6.8-inch 120Hz display that weighs 228g; and you need both hands to operate it. The back is characterised by five sensors — it feels as if every year there is another sensor being put onto flagships, which attracts a lot of attention, but looks a lot better than the S21 Ultra’s bumpier design.

It has a power button and volume rocker to the right and the S-Pen slot at the bottom left next to the SIM slot and USB-C charging port.

It is also the first time the S22 range features a Snapdragon chipset for the South African market. Combined with 12GB of RAM and 256GB of storage, the Snapdragon 8 Gen 1 chip handles everything you need for everyday use.

You can multitask and use multi-window support by running two apps side by side and using a third as a floating one. And you can switch seamlessly between watching videos, browsing, working, recording videos and taking pictures and it won’t stutter.

In terms of the S-Pen use case, I’m not a typical Note user so for the purpose of testing, it worked great for scribbling or doodling. It converts your handwritten notes into a text format. I personally prefer audio recordings to note-taking but the reduced lag from 9ms to 2.9ms is noticeable because it feels more natural when writing.

I usually get the most use of it during testing with the camera app, but for some reason, the S-Pen refused to perform as a shutter button for the camera. I was provided with both a sample unit and final product in burgundy and green. On the actual phone, I spent a fair amount of time trying to get it to work, but alas, I simply couldn’t, and ended up using hand gestures to trigger it.

Speaking of the camera, it is nearly identical to the S21 Ultra in terms of specs: 108MP wide, 12MP ultra-wide, two 10MP telephotos and a 40MP selfie-cam. But the new chipset allows for better AI processing, and thus better low-light photos in what Samsung calls “nightography”.

The difference is stark. You can stand outside in the dark and snap a photo, but the result is bright and the colours pop. For regular shots during the day, I found the zoom function on text-based images during press conferences poor. The camera struggled with clarity, making the text blurry; the iPhone 13 Pro handled it better with its optical zoom.

That said, the selfie-cam remains unmatched. On a weekend away with a group of eight, we used the S22 Ultra exclusively for wide angle group selfies and it delivered spectacularly. For certain images with light in the background, I found the iPhone handled it better. It was disappointing that the S-Pen refused to work as a remote shutter; perhaps a software update will fix it.

For modes like macro shots, the camera automatically readjusts plus there is a “focus enhancer” setting, which I didn’t think worked as it was supposed because once turned off, results were superior. The default editing tools on the camera have an “object eraser” tool that works brilliantly instead of downloading third party apps.

The S22 Ultra has a 5000mAh battery that lasts all day and well into the night; you are certainly not going to need a power bank. But it only comes with a USB-C cable in the box, so you’d have to buy a separate 45W plug for its fast-charging capabilities.

The handset supports 5G, WiFi 6E, Bluetooth 5.2, Ultra-Wide Band, NFC (works with Samsung Pay) and has a bunch of sensors that include gyroscope, accelerometer, ultrasonic fingerprint and ambient light.

The review unit provided has two physical SIM slots and supports a third through an eSIM; to make use of all you’d have to buy it from retailers or Samsung directly but not a major mobile network operator because they block dual SIM functionality.

The S22 Ultra is Samsung’s best phone currently and is unique because it has a built-in stylus. It offers a ton of features, but it takes time to learn its full capabilities. At its premium R27 999 price tag, it disappointingly doesn’t offer expandable storage and has a buggy S-Pen. It is suited for power users but for the rest, the S22+ and S22 with the same chipset offers better value.

Galaxy Fold will be in SA stores in May