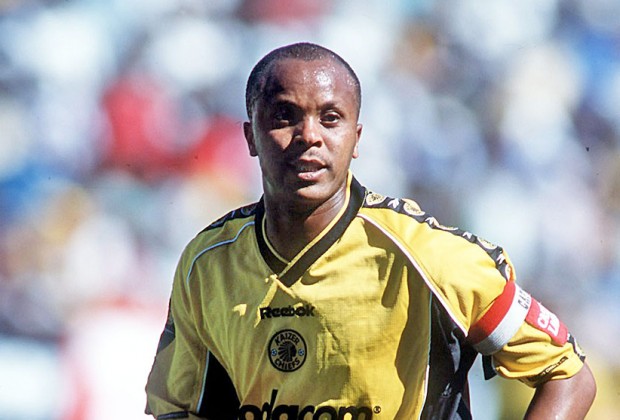 When you encounter one of South Africa’s most enduring enigmas, soccer star Doctor Khumalo, it is not hard to see why so little outside his football career is known.

Having received a surprise call-up to the national team three weeks after turning 34, Khumalo continues to display contradictory qualities. He openly embraces the status of celebrity: personalised car registration and cellphone logo, his lounge adorned with accolades that bear testimony to an illustrious 15-year career.

Yet he remains coy and reticent about aspects of what little space and time he has away from the spotlight. He has successfully maintained an ambivalent relationship with the media yet has remained adored by fans.

He has been photographed with Rochelle Mtirara, one of former presi-dent Nelson Mandela’s grand-children, TV presenter Melanie Son and now kwaito star Nestum, but has maintained a dignified silence about his love life, refusing to confirm rumours, even tacitly. “I still would not like to,” he says.

Khumalo is the biggest celebrity and pin-up boy of his generation. He was among the first sports stars to be embraced across the colour line and South Africa’s borders. His appeal stems from his irreverent charm, mercurial talent and, most importantly, his diplomatic demeanour.

He is driven by fierce loyalty. In South Africa he has played all his club football with Kaizer Chiefs. Throughout his career, he has endorsed the sportswear label Puma in the process turning down opportunities of more lucrative deals.

“It is simple really,” he says. “If you look after me, I will repay you with loyalty. I suppose it has to do with my upbringing.”

The status that he now enjoys has been duly earned with limited exertion and an abundance of talent. For both club and country, he has been a marvel to watch. Over the past decade, he has been one of the game’s most devastating dribblers, incisive passers and inspirational figures.

When soccer lovers speak of a product of Soweto, they refer in particular to the dribbling wizardry bred out of deft control of an object that is a vague approximation of a soccer ball.

Khumalo is the last true product of those dusty streets of Soweto. Two players who come close to his wizardry at present, teammate Jabu Pule and Orlando Pirates star Steve Lekoelea, are from Daveyton and Sebokeng respectively.

Khumalo agrees we have just witnessed the most competitive season since the formation of the Premier Soccer League. He watched his team blow two chances to clinch the title with a loss to Free State Stars and a draw against tenacious newcomers Golden Arrows. He is unperturbed and philosophical when he notes: “Such is the game of football. We cannot just look at the last few games. We must look at all the points we dropped during the season.” He hides his disappointment well.

Having made his professional debut in February 1987, he scored his first goal for Chiefs in the biggest fixture in South African football, the Soweto derby against archrivals Pirates.

Years later when South Africa was readmitted to international football, llllhe scored Bafana’s first goal against Cameroon in lllDurban, where he returns this weekend for a 50th cap.

He was part of the all-conquering Chiefs side of the 1990s. His midfield partner was Donald “Ace” Khuse. They would establish an unassailable lead with ruthless efficiency and then toy with the opposition with clever back-heels to the delight of the crowd. When Chiefs won the league and Bob Save double in 1992, he was their player of the year.

His attempts to ply his trade in the world’s top leagues have brought mixed results. In 1992 he went for trials with England’s Aston Villa. After impressing the journeymen of English football, he pulled a hamstring and was sidelined for six months. The deal fell through.

In 1995 he secured a move to Argentina’s Ferrocarrill Oeste and played what was described as a decent season. The stint ended when he was recalled after the Argentines failed to pay the full transfer amount.

Former national coach Clive Barker tells a simple story to illustrate his regard for Khumalo. Just before the 1996 African Cup of Nations, in a friendly against Germany, Barker gave his team talk and he spoke to each player individually. He left Khumalo to last and asked him to do something special to win the crowd over early in the game.

Midway through the first half Khumalo received the ball at the centre of the pitch. He was being marked by Andy Moller, fresh from being named Bundesliga player of the season. With remarkable composure Khumalo skinned a world-class player and then nutmegged him. The crowd went wild, nerves were calmed and the game ended 0-0, a heartening result against illustrious opposition ahead of a major tournament.

In the successful home Nation’s Cup campaign, he was one of the most influential performers, although he could not score a goal. The closest he came was when he missed a penalty a rarity at his peak against Algeria in the quarterfinal. He redeemed himself by setting up some of the most important goals in the tournament particularly in the 3-0 win over Ghana in the semifinal.

The two goals he set up for Mark Williams in the final victory against Tunisia were his crowning glory.

There was also the game against then world champions Brazil in which he created a goal for Phil Masinga and added his own before half time to put Bafana within 45 minutes of glory. He was pulled off at half time and watched from the bench as the Brazilians came from 2-0 down to win 3-2. That must have hurt.

Two contrasting events made him declare 1997 “his best year, his worst year”. The upside was that he was into his second year of a relatively successful stint in the United States Major League, having joined Columbus Crew after the Nations Cup along with the likes of the evergreen, or ever-blond, Colombian Carlos Valderama, in a stint he describes as “Da bomb”.

The nadir came when his father Elkiam “Pro” Khumalo was shot dead by hijackers. His diplomatic streak came through when he refused to pander to populist sentiment and call for vigilantism or the reinstatement of the death penalty. Instead he appealed for calm and restraint among angry fans. He went on to talk about the pain of seeing his dream of retiring to a farm on a stoep and talking to his old man about football, life, love and everything else snuffed by the crime wave.

To end off a bad year, Barker resigned after the Confederations Cup in what Khumalo believes was a move motivated by politics “from people who when given a chance have failed to deliver”. He maintains that someday he will tell all in a book.

A derailed international career saw him miss the 1998 African Nations Cup in Burkina Faso only to claw his way back to Philippe Troussier’s squad for the 1998 World Cup in France. An opportunity to play on the biggest stage of them all was reduced to 22 minutes against Saudi Arabia in South Africa’s final game, a 2-2 draw.

His reflections on the France showpiece are rather unsavoury and reflect what is, in his opinion, the problem in the national team. “We failed in France because we were playing Euro-African soccer,” he says.

“The national team needs someone who can hold the remote control and dictate the pace of the game. Unfortunately the tactics we have been using do not encourage flair.”

A question that continues to haunt Khumalo is whether South Africa could have done better had he played in the second game against Denmark. Following a nerve-racking opener against hosts France, which South Africa lost 3-0, they badly needed to win against the Danes. His replacement, Alfred Phiri, was sent off in the first half, so we will never know what could have been.

All that can be said to support his inclusion is that his temper would not have caused him to be sent off and he, not Phiri, had the big-match temperament and the ability to turn it on when it mattered most.

In 1999 Khumalo captained a threadbare squad in the ill-conceived tour of the Caribbean to promote South Africa’s World Cup bid. His team suffered a 2-0 shock defeat against Trinidad and Tobago and had to dig deep to hold Jamaica to a 1-1 draw. That was his last stint with Bafana until this week’s recall.

He finds himself in the squad despite having started just 19 games for Chiefs, and a further 13 as a substitute, and not having scored a goal since May 1998.

He seems casual about his return. “Well it’s just a call-up like any other. I’ll just play my natural game.” Does he see himself in Mali for next year’s African Nations Cup or, more importantly, the World Cup in Japan and Korea? He will just take it as it comes.

In recent times he has had to deal with the question of when he will retire. He has defiantly refused to confirm when that will happen.

After his playing days are over his two most obvious options are coaching and commentary. He has rejected the former and slightly entertained the latter. In the limited commentary he has done for e.tv, and the numerous columns he has written for newspapers and magazines he has displayed neither refined eloquence nor succinct erudition. His view of the game is centred on the midfield. His view of life is centred on the game.

His contract expires at the end of the coming season when he “will either renew it or just go up to the board” by acquiring a stake at Chiefs. The figure currently mooted is 5%. He seems undecided.

You sense the hunger for glory has ebbed: having won everything possible with both club and country he is unfazed by the idea of missing big club matches. He is unmoved by the chance to play for his country and indifferent about the fact that they lost the league in such a heartbreaking fashion.

Somehow, you do not see him renewing his contract.

It’s do or die for Bafana coach Baxter

Barcelona live: A chance to observe tactical genius in the flesh

Clever boys on the ball