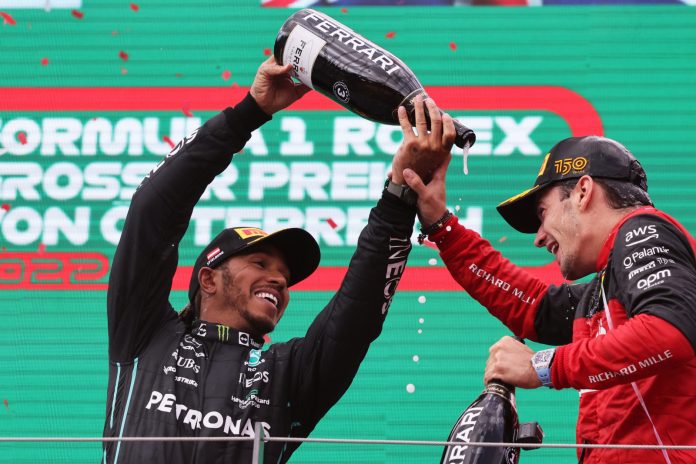 If there’s one thing we’ve come to learn this year is that it’s not over till it’s over. This year’s Austria’s F1 Grand Prix was anything but the Max Verstappen show it was set up to be, even with the sprint results. Thrills, spills and the return of that Ferrari fighting spirit we saw at the beginning of the year: All we know is that if this is the way the season is going to rollercoaster, we’re in for a rather entertaining second half to the season. Hope you have those anxiety pills on the ready.

Qualifying on a Friday, thanks to the sprint weekend format, spices things up quite a bit. There’s limited time for teams to dial setup and performance up and, if you’re missing a practice session, even one of them, you’re not having much time to get up to speed. That is why it’s exciting and that is why sprint weekends need to stay.

With another poor qualification by Daniel Ricciardo not making it past Q1 accompanied by the news that IndyCar star Colton Herta would be testing the 2021 McLaren at Portimao this coming week, one can expect the pressure to be mounting on Daniel Ricciardo, come race day.

But then again, diamonds are made under pressure and Daniel knows that. Mercedes were, however, left with egg on their face after both Russell and Hamilton crashed out in Q3, resulting in the travelling Dutch fans cheering — a poor reflection, if ever, and something no one wants to see. Verstappen took pole, followed by Leclerc and Sainz. The Dutchman snaps it right at the end piercing through the Orange smoke flares.

Let’s forget, for a moment, Max Verstappen setting it off for destination “chequered flag” from the start, despite Leclerc’s cheeky stab early on. Both Ferrari and Haas have similar problems on their hands concerning drivers not working together in certain situations, but we’ll focus on the prancing horse team for now, as it’s been an interesting development that’s been coming to a boil.

Now I’m all for a bit of fighting but what’s come to light is the classic plight of the F1 driver. Win at all costs. The logical decision would be to team up and chase Max down. Defending slows you both down. Facts. Why then did they fight each other?

Let’s discount the discussion of team orders being issued. Surely, it’s in their best interests to work together, pushing each other to get to Verstappen and then duke it out, giving the team the best chance of victory?

They fought because they were only putting their agendas first. Simply put. Carlos wants to prove that he’s better than Charles and ‘ol dreamy eyes Leclerc wants to continue proving that he’s Ferrari’s number one driver. It’s only a matter of time before we have a repeat Red Bull scenario of Mark Webber and Sebastian Vettel in the 2010 Turkish GP when the pair collided with each other. Or again with the Hamilton/Rosberg incident at the 2016 Spanish GP. End of the Sprint saw Verstappen taking P1, Leclerc in P2 and Sainz in P3.

The birds are in the oven on a Sunday afternoon and we’re getting ready for racing. Compared to the carnage at Silverstone, this start saw everyone getting away cleanly into the first corner — not what we’re used to. Sergio Perez’s rampant form in the Sprint race coming back from P13 to P5 was reduced to none after he made contact with George Russell on the first lap, Red Bull pitting and then deciding to retire the car after the damage to the side pod.

It was all looking like a Red Bull/Verstappen whitewash leading up to the start of the GP, but Ferrari seemed to have other plans and whatever team principal Mattia Binotto said to Leclerc, it worked, and it was almost as if they dialled it back, returning to that form we saw in the opening part of the season. It’s brilliant to see and shows you the fickle nature of this sport at the best of times. You can never predict anything.

Can we all just take a moment and appreciate that pass from Leclerc on Verstappen on lap 12? It’s a rare time when the Dutchman was either napping or had he admitted defeat at the moment. The tyre degradation issues for Red Bull meant that Verstappen was likely going to be a two-stop plan and then an early move by Ferrari meant that an early stop was needed for Red Bull, putting them on the back foot.

As we saw all weekend long and in all the support races, including the F2 and Porsche Super Cup, the ease of going over track limits proved too much of a temptation for the majority of the drivers at the Red Bull Ring.

Back to the racing, though. I think we can comfortably put the conversation to bed concerning whether these new cars would provide the close racing we wanted. Another example in support of that argument comes from the five-car dice on lap 24 between Schumacher, Zhou, Magnussen, Alonso and Norris. Further up on the sharp end of the field, Ferrari looked to double up the passing on Verstappen when Sainz’s Ferrari engine gave up the ghost on lap 57, causing a fire and some rather dramatic scenes. Once more, luck is not going the Spaniard’s way. Racing, hey?

A virtual safety car sparked Leclerc and Verstappen to act quickly, pit and fit a new set of medium-soft tyres on. Mick Schumacher rides the waves of momentum securing his second points haul. What a fine young talent he is turning out to be.

Even though Verstappen launched a last-minute attack, thanks to Charles Leclerc’s accelerator getting stuck, it was not enough with Charles reigniting (bad pun, considering Sainz’s misfortune, I know) the championship battle and providing the excitement with a blood-lusting fanbase. Leclerc finished in P1, then Verstappen in P2 and a solid-looking Hamilton in P3.

We now look forward to the French Grand Prix at Paul Ricard on 24 July, and possibly the last time we’ll see a GP there if Kyalami has anything to do with it. Nudge, nudge, wink, wink…