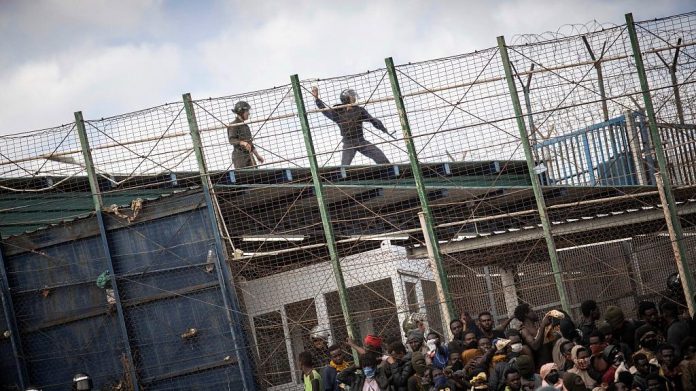 On 24 June, Spanish and Moroccan police killed 37 unarmed African migrants and wounded 100 others at the border of Morocco and the Spanish enclave of Melilla. The bloodletting occurred when 2 000 Africans, many of them from Sudan, tried to enter Melilla in search of a better life.

In contrast to developments elsewhere in the world, Melilla has received nary a mention among the South African commentariat, political formations and civil society.

The Office of the United Nations High Commissioner for Human Rights (OHCHR) has since reported that it has “received reports of migrants beaten with batons, kicked, shoved, and attacked with stones by Moroccan officials as they tried to scale the barbed-wire fence, some six to 10 metres high, separating Morocco from Melilla”.

Esteban Beltrán, Amnesty International’s director in Spain, earlier this week described photographic images and video footage from the crime scene as “shocking”. They show “bundles of people  —  dead and alive  —  piled up on the ground while Moroccan police walk among them, shaking and beating them with truncheons and batons”.

The OHCHR said the slaughter is “the highest recorded number of deaths in a single incident over many years of migrants attempting to cross from Morocco to Europe via the Spanish enclaves of Melilla and Ceuta”.

The backdrop of this charge is the regular murder of non-Caucasians who have tried to enter Spain over the past decade and more. This week, Beltrán recalled the deaths of 13 people by Moroccan and Spanish police in 2005 and another 15 who “drowned on Tarajal Beach [in 2014] when Spanish police used anti-riot equipment against them”.

Addressing the media in New York this week, Michael Kiboino, Kenya’s chargé d’affairs at the United Nations, pointed out that Melilla “was not an isolated incident. It is part of a worrying trend in recent years in which people of African descent travelling to Europe via the Mediterranean suffer extreme violations of their human rights. Thousands have died. Thousands of others have been sold into slavery and many more have been violently assaulted.

“The young Africans undertaking this journey are doing so for different reasons. Some are economic migrants trying to survive from livelihoods that have been destroyed by the effects of climate change. Others are fleeing the foreign fighters and weapons that poured out of Libya following the intervention that the Security Council authorised in 2011. There are those fleeing from terrorist groups in the Sahel [region] that are being sanctioned by the [UN Security] Council and that are engaged with the peacekeeping force,” the UN Multidimensional Integrated Stabilisation Mission in Mali.

Livelihoods have not only been destroyed by climate change and Nato’s 2011 invasion of Libya. Other interventions by countries of the Global North have played no less of a role. A September 2017 report by the nonprofit ocean conservation organisation, Oceana, found that Greece, Italy, Portugal and Spain were involved in pirate fishing activities in The Gambian and Equatorial Guinean waters. These activities had reduced fish resources along the West African coast so much that people who previously eked out a living as fishermen were migrating to Europe in search of greener pastures.

Or so they thought, not knowing that thousands of African migrants who make it into Spain are detained in any one of the country’s eight “foreign internment centres” where they are subjected to inhumane and degrading treatment.

In 2020, the Geneva-based Global Detention Project, which investigated conditions at the centres, reported “allegations of abusive treatment, continuous aggression which remains unpunished, scarce medical assistance, lack of access to medicine, lack of psychological support, irregularities in expulsion procedures, obstacles and or denial of access to the asylum procedure and arbitrary [denial of visitation] access [by] family members or relatives”.

By far the most obnoxious comment about the massacre came from the general secretary of the Spanish Socialist Workers’ Party, Pedro Sánchez, who also serves as the country’s prime minister. He described the migrants’ attempt to enter Melilla as a “violent and organised act by mafias that traffic human beings to a city that is in Spanish territory … It was an attack on the territorial identity of a country in a violent manner” and “a violent assault that calls into question our own territorial integrity”.

Never mind that Sánchez identifies as a socialist, his rationalisations are taken directly from the copybook of the right: xenophobic and racist. Like other rightwingers, xenophobes and racists elsewhere in the world, Sánchez scapegoats, deliberately and cynically presents unarmed migrants as a violent threat. Perversely, the Melilla victims are portrayed as the aggressors, even as they faced heavily armed police behind fortifications of high barbed wire.

The attempt to enter Spain amounts to “a violent assault that calls into question [the country’s] territorial integrity” to justify police brutality to people whose perceived sub-human status warrants that they are treated any which way.

Having laid an anti-foreign migrant policy framework, politicians reinforce it by regularly using, like Sánchez, emotive rhetoric, ignoring the reality that their policies and practices contribute to the need of Africans to migrate, which is not to exonerate Africans from the bitter fruit of our commissions and omissions. Especially in times of economic distress, sections of society degenerate towards the xenophobic and this is true for Spain as it is for nearly every other country.

Like other migration corridors, South Africa faces migration inflows from outside our borders. Melilla presents important lessons that should help us in dealing with migration.

One of them is that state-sponsored or not, violence is not the answer to addressing the problems posed by migration. South Africa’s department of international relations and cooperation has called on all states to commit to treating “migrants and their families with the human rights accorded to them under international law”. Melilla also underscores the need to premise the migration discourse in the context of global justice, including equitable resource distribution in and between countries and a clear commitment against racism, racial discrimination, xenophobia and related intolerances.

Another lesson is the clichéd homily about porous borders as the source of migration is just that: a homily. South Africa and the rest of the continent are better off exploring common solutions at regional and continental level than attempting to procure solutions as individual countries in silos.

In 2018, the African Union adopted the Migration Policy Framework for Africa and Plan of Action (2018-30) followed by regional frameworks, including the Southern African Development Community. The difficulty appears to be one of implementation rather than the absence of policy frameworks.

Yet another lesson is that the depletion of African oceanic resources to which the Oceana report referred points to the need for regional and continental unity in addressing all the push and pull factors of migration. The 40 000km African coastline straddles 38 countries and island states. Why not consider an inter-Africa navy brigade to patrol the coastline?

Africans dare not forget the menace of international racism that the privileging of Ukrainian refugees over Africans and Arabs has once again brought into sharp relief. Among others, this implies the problems posed by the inflow of migrants to each of our countries ought to be handled in ways that do not jeopardise African unity because we sink and swim together.

The international relations and cooperation department’s statement decried the global rise of violent incidents meted out against migrants: “We see similar anti-migrant sentiment in South Africa, which at times, aside from challenging the very foundations of our constitutional democracy, could lead to mass violence against migrants irrespective of their status.”

The lesson implicit in the statement is that political actors, especially those who occupy positions of responsibility in government, should cultivate the habit of speaking responsibly about migrants and migration. Those who think of themselves as progressives should be wary of singing from the same hymn sheet as the rightwing establishment locally and internationally. It is necessary, possible and desirable to manage migration without inciting the population, intentionally or otherwise.

Melilla stands at variance with the core provisions of South Africa’s Constitution. Silence in the face of injustice is not only complicit, it begets further injustice.

Mukoni Ratshiṱanga, former spokesperson for president Thabo Mbeki, is a communication and social participation consultant based in Johannesburg.