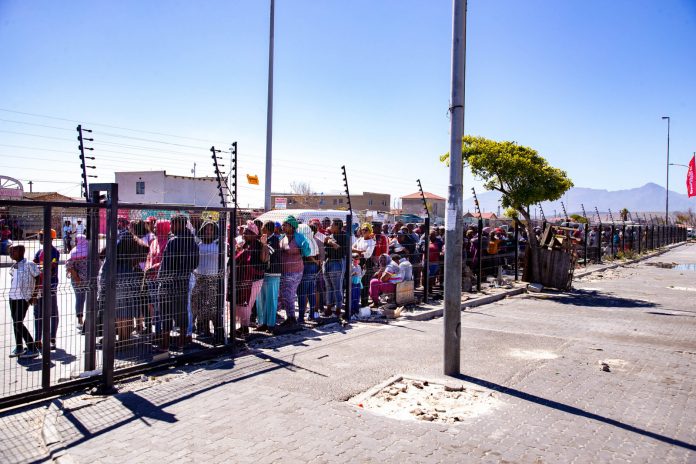 I anxiously peek out the window to see if Mavis has arrived. A jovial, warm-hearted optimist, Mavis sells scones and amagwinya close to the bus stop I use. Her face beams a smile of relief as she sees me walk towards her.

I beam equally, for there’s a tacit mutual sense of comfort that we are not alone. It’s a much-needed comfort when darkness shrouds our area in the early hours of the morning, either due to Eskom load-shedding or cable theft that prolongs the load-shedding. It’s school holidays, it’s winter and the dim orange light offered by streetlights on the main road is nowhere in sight. During school holidays there is less traffic and there are fewer people on the road, which makes Mavis and me both potential targets for criminal opportunists.

As a cost-saving mechanism in these turbulent economic times, I take the 436 bus to work for convenience. It arrives between 6.35am and 6.40am and drops me off right in front of the office just before 8am. It’s a safer public transport option for me.

In winter, the streetlights aid people like myself and Mavis, who must leave home early to go to work. Load-shedding, however, augments fear and makes life difficult. I try to leave the house five minutes earlier, to meet her as she arrives, so that she doesn’t feel alone. Our conversations are dominated by the rising cost of living, as we are both single moms. In that 10-minute interval, we become each other’s guardian angels.

The situation is far more dire for Mavis, for she walks 8km to get to her selling spot. She can take a taxi, but she says that takes away from her already shallow pockets. She uses the main road, as passing cars and taxis give her a sense of safety that if anything were to happen or she were to get attacked, someone would notice.

Without the streetlights during load-shedding, the journey is terrifying. She must leave the house slightly later, which in turn makes her lose the business of earlier customers such as petrol attendants and security guards going to work in the vicinity. She needs this business more during this period as schools  — her main customer base — have closed.

Mavis’ small business helps her and her family survive since she lost her job in the retail sector during the Covid-19 lockdown. Her budget constraints determine how her business will perform daily.

She tells me the dramatic increase in the price of cooking oil has affected her profit and that load-shedding now requires her to get a one-plate gas stove, which requires a gas bottle, this after she’s already bought electricity for the month.

Sadly, her kind of business makes it to the “public relations” section of the State of the Nation address but will never qualify to get any kind of relief or funding, as the Covid-19 pandemic has proven. Despite billions of rands being allocated for assistance, many businesses, such as those like Mavis’, did not get a cent. Businesses like hers survive on the periphery because of systematised red tape. I’m reminded of the theatrical story about a sudden ice-cream venture miraculously created by the R350 relief grant from the South African Social Security Agency (Sassa).

Mavis complains about how Sassa declined her application for the R350 relief grant because, for some odd reason, the system says she receives money from the Unemployment Insurance Fund she says has never received.

“Hayi MaNdima, but I’m unemployed and this R350 can help my business. What’s R350 to the government if they allow people to just steal millions for masks and sanitisers!” she exclaims with frustration. We share banter on the matter. I also don’t understand the government at the moment. I do not understand anything happening in South Africa as it stands. I am just as despondent as her about politics and politicians.

The energy conundrum affects everyone, but the implications for people like Mavis who are trying to survive the pitfalls of the second economy, rarely get public space.

Millions of men and women who by circumstances find themselves in the class of the destitute — betrayed and despondent — are forced to survive and adopt with little or no aid from the government.

Those who relied on trains before the “infrastructure smash and grab sabotage” period during lockdown, have had to find other modes of transport. Those with no financial means to do so, confront the danger of walking abnormal distances, usually during abnormal hours of the day, to earn exploitative wages that don’t justify being called a living wage.

The thrashing realities of capitalism have been exacerbated by the energy conundrum, tragically with no end in sight. South Africa’s leadership has proven that it has no strategic foresight to deal with any form of crisis (Covid-19 included). Yet it has further accepted further debt for a Covid-19 pandemic emergency, which has had far worse socioeconomic consequences than the propagated health ones.

A Mavis at this point, and millions of women and men like her, would probably appreciate a financial or resource injection such as a gas stove (as they do not come cheap) than further unnecessary campaigns to vaccinate.

Unfortunately, even if the government created such a relief, it’s been proven that those intended to benefit don’t even get close to the crumbs of such funds.

With arguably the “leader of society” (bestowed with the responsibility to lead government), wrangled in inward factional and state capture battles as momentum builds towards the ruling party’s national conference in December, it has become a luxury to see any concrete political response to deal with economic issues, let alone a sound coherent statement about anything in South Africa.

Further to that, the president seems preoccupied with frantic attempts to conjure a Bell Pottinger-style counteroffensive to manoeuvre around his own million-dollar farmyard scandal. It does not help that he seems to have no authority over his fragmented cabinet.

Where does this leave millions of South Africans displaced by the current adverse economic trajectory?

The now-defunct tripartite alliance partners have forgotten the people it once served. Mavis and millions of workers’ futures hang in the balance because of their loud silence, as the ANC runs amok with the fragile future of South Africa. It’s a dog-eat-dog world in the beloved South Africa, which once promised a future of a national democratic society and a “better life for all”.

I tell Mavis about my weekend in Katlehong and how roads have been closed by residents because of their frustrations with electricity. “Is that Operation Dudula?” she asks. I explain that it isn’t, but we agree that the Soweto-based movement is occupying space across the country. This leads to a brief analysis about the 2024 elections. We both sigh from helplessness. The eternal optimist in her gathers the strength to say: “It will get better someday.”

As my bus stops, I bid Mavis goodbye. Burdened with my own survival realities, I join the  commuters heading for industrial parks and factories that have not yet shut down due to the energy crisis. They too have survived the systemic booby traps and made it into the bus in the wee hours of the morning.

I leave Mavis to try and sell her stock to the workers making their way to work.