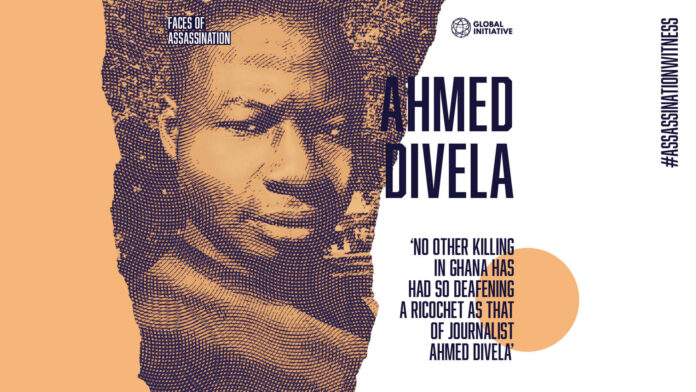 Ahmed Divela was one of Ghana’s most fearless investigative journalists. This edited excerpt about his killing is from Faces of Assassination, a new book published by the Global Initiative against Transnational Organized Crime. The book assembles 50 profiles of people who have been assassinated by criminal groups since the start of the millennium

With the exception of the public execution of corrupt state administrators by the military government of Jerry Rawlings in 1979, no other killing in Ghana has had as deafening a ricochet as that of journalist Ahmed Hussein-Suale Divela. Grabbing media headlines and dominating public discourse in cities and far-flung villages alike, everyone is talking about the man who lived and worked in the shadows, but whose death transformed him into a public hero.

On the night of January 16 2019, two men on a motor bike trailed a blue BMW, zipping through the streets and roads of Madina, a suburb of the Ghanaian capital, Accra. As the motorbike levelled with the car, a gun was fired at the driver, for-cing him to swerve and crash the car into a roadside store. One of the men then calmly walked up to the BMW and fired two more shots at the man behind the wheel. Then, turning to face the motley crowd watching from a distance, he smiled and raised a finger to his lips.

Because the gunmen did not appear to be in a hurry to make a getaway, many of the people in the crowd concluded that what they had just witnessed was the shooting of a midnight film scene by some quirky director from Ghana’s movie industry. But there was no camera crew and no lighting technician directing his floodlight at the dimly lit scene. The gunmen disappeared, and the crowd inched closer to the car, with its shattered left window. The man behind the wheel was dead. This was no movie; the blood was real.

Jonas Nyabor, a journalist with Ghana’s Citi FM, said that Divela’s killers were without a doubt paid assassins. “Obviously, they were trained marksmen, who shot with military precision. They did not waste any bullets. All three shots hit their targets: one to the neck, the others to the chest. And they did not take any valuables from the victim to suggest robbery. They left no one in doubt about who they were, or what their mission was. Honestly, I cringe every time knowing that the victim was a journalist, like me. He did not deserve such a gruesome end,” Nyabor said.

Divela, 31 years old when he was killed, was a native of Wulensi, a village about 400km north of Accra. After graduating with a degree in political science from the University of Ghana in 2012, he chose the tough and dangerous turf of investigating organised-crime groups as a career path. This he pursued in the manner of a supercop. Divela’s biggest influence was Anas Aremeyaw Anas, an internationally acclaimed Ghanaian undercover reporter whose work has been acknowledged by the likes of United States president Barack Obama.

Divela was a determined apprentice, quickly learning the ropes at Anas’s undercover outfit, Tiger Eye, which had achieved renown for its exposure of human-trafficking syndicates, corruption and abuses in a state-owned psychiatric hospital. Divela was part of the team behind Tiger Eye’s Spirit Child, an investigative documentary that exposed a ring of voodoo priests who made a living branding disabled children as evil spirits to be cast out of society.

Unfazed by high-risk conditions, Divela was known for never allowing anything to stand between him and a big story. In a pained remark following the killing, Anas acknowledged Divela’s position as second-in-command of the team that pulled off two of Tiger Eye’s most successful assignments — Ghana in the Eyes of God and Number 12.

Ghana in the Eyes of God, a 2015 undercover investigation of the country’s criminal-justice system, caught on camera 30 judges and dozens of judicial officials accepting bribes for helping to subvert the course of justice. Seven high-court judges were exposed and suspended as a result.

Number 12 blew the whistle on corrupt football referees across Africa, who had taken bribes to fix matches. A number of Ghanaian referees and Kwesi Nyantakyi, head of the Ghanaian Football Association, were caught accepting money from Tiger Eye journalists posing as intermediaries. In addition to Nyantakyi, who was banned from football for life, the sting implicated 77 referees and 14 officials.

Buoyed by their success in Ghana, the undercover team took their cameras into several other African countries, including Kenya, the Gambia and Nigeria, where investigations revealed a similar situation of endemic bribery. In the wake of Divela’s assassination, fingers are being pointed by and at different enemy camps.

Some suspect that the assassination was arranged by the African football community; organised-crime groups are fast taking over the sports-betting business. Match-fixing, the influencing of sponsorship deals and the bribing of officials are just some of the rackets accompanying an industry marred by fake football academies and fake agents, who steal fortunes from rich and poor families alike for the promise of getting their sons a place in the European leagues.

In September 2018, Divela had informed the Committee to Protect Journalists that his life was in danger. Kennedy Agyapong, an MP for the country’s governing New Patriotic Party and owner of the Ghanaian television station Net 2 TV, had appeared on television calling on his supporters to attack Divela as punishment for his role in the football exposé, at the same time releasing a photograph of the undercover reporter and unveiling his identity.

Four months earlier, Agyapong had made another angry television appearance, this time on Adom TV, during which, in the course of his outbursts, he drew his forefinger across his neck in a throat-slitting gesture. It is clear that despite being neither a football referee nor a high-court judge, Agyapong harboured much anger towards Divela. And the police said that they have invited the MP for “informal questioning”, despite his having made public statements distancing himself from the murder.

In response to an email inquiry about the state of the investigation into Divela’s death, Samuel Appiah Darko, a lawyer representing Tiger Eye, said: “Police investigations can best be described as slow. Nothing tangible has come up so far.”

At the time of writing, the Ghana Police Service was yet to find the smoking gun. In February 2019, assistant commissioner of police David Eklu disclosed that six people had been arrested in connection with Divela’s murder. According to police, the suspects, who remain unnamed, were interrogated and their statements taken before they were released on bail.

Eklu said that, in addition to the six suspects, the police had given statement forms to Agyapong, Nyantakyi and Anas, “all suspects in the case”. No progress report on the investigation has been provided by the police since.