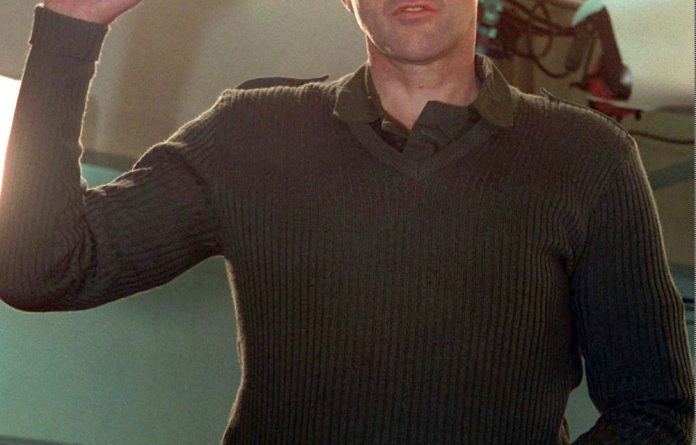 I feel sorry for Eugene de Kock. From where I’m sitting the man shouldn’t have had to spend one day in prison.

He was a soldier of an evil system that benefited all white South Africans and it doesn’t make much sense to draw distinctions between what was legal and illegal under apartheid.

As we know, the whole system was declared a crime against humanity, which means that the benefits derived from apartheid are the proceeds of crime. So if such ill-gotten privileges were enjoyed by the whole community, why should one man suffer for it?

Think about it: how could apartheid have been designed and defended if not by violence and death? It is thanks to men like DeKock that the per capita annual income of whites today is R136 000 compared with the meagre R19 500 for Africans.

The Democratic Alliance is shortsighted when it says that neither De Kock with Schabir Shaik deserves a presidential pardon. First, it’s plain wrong to equate the crimes of De Kock with those of Shaik. The latter — with the likes of Tony Yengeni and Allan Boesak — was thrown to the wolves because he fell out of favour with the powers that be and became dispensable. And their crimes pale into insignificance compared with the scale of post-apartheid thieving.

But De Kock was fighting a dirty war on behalf of the whole white community. It is a mistake to see racism as individualised acts of evil: it is an institutionalised power arrangement that benefits whites whether they are self-declared racists or not. To create this white power a lot of violence, looting and dispossession were necessary and laws were enacted to confirm the humanness of whites and the sub-humanness of blacks.

White power is therefore concentrated historical violence designed to produce unearned white privilege. We have to understand the individual acts of racism such the University of the Free State saga within this framework. White power as naturalised and invisible makes such behaviour possible and not punishable.

So De Kock must be to be allowed to walk. I’m not sure about his being pardoned, because surely no one can pardon on behalf of those who perished at the hands of Eugene and his askaris. He should walk for the same reasons underlying Thabo Mbeki’s offer of a state funeral for PW Botha and the same logic that allowed FW de Klerk, dripping with the blood of blacks, to share a Nobel Prize with Nelson Mandela.

But, most importantly, it’s both a mistake and pure hypocrisy to equate apartheid crimes with Vlakplaas. What happened on that farm is what made life possible for white South Africa and hell for blacks within the logic and practice of white supremacy. Vlakplaas was therefore a merely symbolic representation of apartheid. In a sense, when the ANC forgave the political figures of apartheid they at the same time forgave the likes of De Kock, who only really took orders from his principals.

We also need to move beyond the annoying psychological reasoning based on Freud’s fraud that all evil is the fault of parents. Clearly De Kock made a choice to defend apartheid, and maybe he was a little overzealous, but he was a hero for his troubles. De Kock was not a societal misfit but the epitome of that society’s logic.

As Franz Fanon counsels, we need to abandon the habit of “considering racism as a mental quirk, a psychological flaw”; as he says: “The racist in a culture with racism is normal.”

To understand the full extent of white culpability, one has to understand apartheid in Rian Malan’s terms — that apartheid’s greatest achievement was not the violence and mayhem it wreaked on black lives, but the creation of “suburbs like Parktown, where English-speaking liberals lived in a bubble that resembled nothing so much as the more civilised parts of Boston or London”.

De Kock and PW/De Klerk are two sides of the same bloody coin and both were necessary to create this “Western moonbase on Africa, where whites lived exactly like whites in the capitals of the great white empire”, in Malan’s words.

If Jacob Zuma uses De Kock to pardon Shaik, he will be helping to cover up the exact nature of the crimes committed by the commander of Vlakplaas. Let De Kock confess nothing and be free to enjoy the rest of his days like the rest of white South Africa. Justice is still to be done.

Andile Mngxitama is the publisher of New Frank Talk