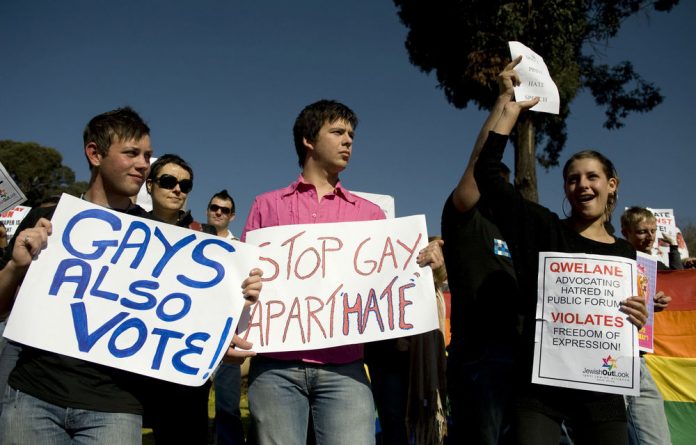 The ANC has asked for “scientific proof” that former journalist Jon Qwelane is homophobic, while Qwelane himself remains unruffled by the storm of controversy ignited by speculation that he will be South Africa’s next ambassador to Uganda.

Human rights activists and lesbian, gay, bisexual and transsexual (LGBT) organisations tore into Qwelane when he wrote a column in the Sunday Sun in 2008 entitled “Call me names but gay is not okay”.

A cartoon suggesting homosexuality was akin to bestiality accompanied the column, which also called for politicians to change the Constitution. Qwelane subsequently refused to apologise.

An anti-homosexuality Bill is before Uganda’s Parliament, providing for homosexuals to be prosecuted and possibly face the death penalty.

“Do you have any scientific evidence that [Qwelane] is a homophobe?” ANC spokesperson Jackson Mthembu asked the Mail & Guardian this week.

“When we send anyone to any country, those of us who [go] there should respect the Constitution of that country, even if at the time we may frown on what that country chooses to do. We don’t understand why this appointment should be an issue.”

Qwelane said to the M&G: “I know nothing about what you are talking about. I read about it [the appointment] on Sunday and I have no thoughts on it.”

The Department of International Relations and Cooperation “can neither confirm nor deny [the appointment]”, spokesperson Saul Kgomotso Molobi told the M&G. He would not be drawn on whether South Africa supports Uganda’s anti-homosexuality Bill.

Qwelane is the subject of a complaint at the South African Human Rights Commission laid by rights groups which accuse him of hate speech. “The process is now in the hands of the Equality Court,” commission spokesperson Vincent Moaga told the M&G. “We have served court papers on Media 24 Holdings [which owns the Sunday Sun] and Jon Qwelane.”

South African Institute for International Affairs researcher Auriel Niemack said: “We risk being accused of paying only lip service to human rights; we were accused of that on the United Nations Security Council —

“This will send an implicit message that we tolerate what’s going on in Uganda.” She expects Qwelane’s appointment to be confirmed this weekend.

In a letter to President Jacob Zuma the Lesbian and Gay Equality Project said: “Mr President, an appointment of Qwelane in any public office will undermine your own apology in 2006 to the gay community — following [your] public comment ‘When I was growing up an ungqingili [a gay man] would not have stood in front of me. I would knock him out.’

“Furthermore, his appointment would suggest that you are one of the ‘politicians to muster the balls to rewrite the Constitution’, as [Qwelane] wrote [in the Sunday Sun], which will send this country back into years of oppression, discrimination and exclusion [despite] the internationally renowned provisions of our Bill of Rights.”

The presidency did not respond to the M&G‘s questions.