For the love of God 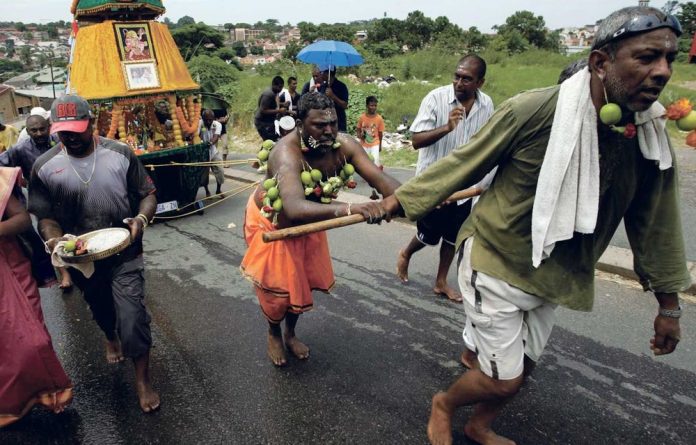 The inducing of religious trances was pervasive at the worship and penitential rituals performed by more than 2 000 devotees of the Hindu deity Muruga at the Meadowlands High School grounds in Chatsworth, Durban, last Sunday.

They gathered for the Thai Poosam Kavady and the scenes there were replicated around the township and other predominately Hindu neighbourhoods in the country.

In the festival’s swirl of humidity, incantations and beaten dhol drums the transcendental metamorphosis of some believers was part comedic-grotesque, part mystic allure and downright unfathomable.

One minute 38-year-old Nathan Gounden was silently immersing himself in the singing, helping to build up the religious fervour that surrounded him. The next, his body had assumed a series of poses somewhere between the cartoonish physical extravagance of The Mask and the racked muscularity of a violent Renaissance-era sculpture.

Contortions gave way to a sort of prance-dance: eyes bulging, tongue sticking out, Gounden moved around, his knees lifting sideways to waist height. Soon afterwards four 20cm-long braising rods, gilded and fashioned into hooks, were inserted into his back — but no blood was drawn. These were connected to a chariot weighing more than 90kg that Gounden would later draw along the arduous 3km journey, which included steep inclines, to the temple. Being Durban, the chariot bears the number-plate “Muruga ZN”.

This while sari-clad women, their eyeballs rolled back, swooned as bhajan groups chanted devotional music and clicked manjiras (miniature cymbals).

The suggestion that theophanies were in progress was reinforced by people — bodies dripping with lime, flowers and bells pierced through flesh — acting as silent conduits of a divine message to believers: from motioning reprimands to be nicer to the mother-in-law to supportive recognition of illness.

About his experience, Gounden said: “All I know is that when I close my eyes [preceding the trance] I say my personal mantra, praying that I am at Lord Muruga’s feet or in his lap. When I come to, all I know is that my body is suffering extreme fatigue and that I can’t account for two or three hours of my life. I have no memory of the time — which is very scary.

“I really can’t explain it. I do believe in different planes or spheres and I suppose I am on an astral plane, on a path to God during the trance,” said Gounden, who is a doctor and has been “carrying kavady” for 33 years.

Kumar Iyer, a local priest, said that trances are not a necessity for the kavady rituals, which see devotees pulling chariots attached to their flesh and carrying kavadies and other offerings to Muruga.

The kavadies are rectangular, arched wooden baskets for carrying milk and honey and decorated with marigolds and peacock feathers that are carried to the temple, where they are offered to the deity.

“Of the 100 people pulling chariots, maybe about half experienced a trance. Because you get into a trance does not necessarily mean that you are closer to God,” said Iyer.

Anand Etty (26) said this was his sixth year pulling a chariot. He did not experience a trance: “I don’t feel any pain, because the journey is about the closeness between you and Lord Muruga. Part of the journey is about overcoming pain and obstacles for God … The trick is not to walk on the water [which people along the route to the temple spray on the ground to ease the road’s heat] because you will then burn your feet,” he said matter-of-factly.

Etty said he had taken a vow to pull a chariot for six years so that Muruga would ease the asthma suffered by his mother and girlfriend, which has got “better’.

Observed mainly by Tamil-speaking Hindus, kavady is both a ritual of worship and recognition of a pact between devotees and Muruga. Believers pray to Muruga for divine intervention in matters ranging from domestic issues, such as alcoholism or violence, to aid in overcoming disease, and vow to carry kavadies in recognition of this plea for help.

But many devotees say the taking of a vow is neither an exchange nor a form of spiritual gambling. “It is about expressing love for Lord Muruga. You shouldn’t do it expecting something in exchange,” said Iyer.

Devotees prepare for the ceremony by praying daily, abstaining from sex and eating only sattvic (vegan) food for 10 days beforehand.

Yet, the trance itself remains a perplexing part of kavady. Gounden, who first experienced one as a 15-year-old, said that, coming from a religious family, he had “always wanted to experience it” as a youngster.

Speaking to the Mail & Guardian a day after the event, Gounden, who confides that he is “obsessive” about Muruga, found it hard to explain his state of religious trance: “It’s interesting that there is no blood drawn during the piercings, but you know that even going for a simple glucose test, a simple prick on your finger will draw blood,” he said.

Some devotees report experiencing their first trance when they are spiritually at their lowest, others, when they are most focused on God.

Perhaps the religious trance exists in that space between self-belief and self-delusion that is required of religious — and any other — faith.