Roll it up and eat it 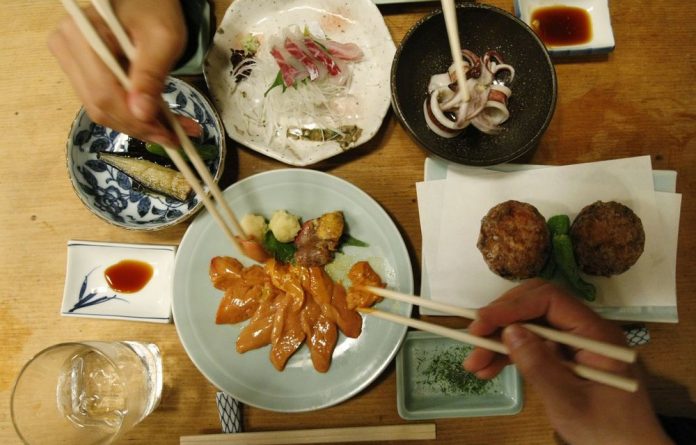 A few years ago a video appeared on YouTube entitled Sushi: A Japanese Tradition. Offering tips on the correct way to eat sushi in Japan, it advises diners to pour exactly 20 cubic centimetres of soy sauce into a dish, then, using just your “middle finger, index and thumb, pick up the sushi from the far side, incline your head to 45 degrees and eat in one go”.

The film shows a line of people tilting their heads and inhaling sushi like robots. “Whether the sushi was delicious or not,” it says, “you must always tell the chef: ‘It’s delicious, Taisho!'”

The video is satire — a spoof on sushi etiquette dreamed up by two irreverent Japanese comics. But so widespread is tourist anxiety about eating in Japan (every Westerner I meet seems to fret about how to hold chopsticks) that you could be forgiven for taking it seriously — at least until it adds: “Because some menu items are illegal, you will discover them only when you ask”, before flashing up images of giant pandas and other protected species.

Japanese cuisine is surrounded by myths and clichés and, as a sushi-obsessive, I travelled to Tokyo imagining they ate little else. But, having enrolled on a sushi-and tempura-making course at the spectacular Peninsular hotel, that idea was quickly dismissed. “I don’t make sushi at home unless my children pester me about it,” says the teacher, Mr Kojima, a sushi chef with 18 years” experience. “And, if I do, we just eat hand-rolls,” he says, expertly massaging the perfect nigiri (rice topped with fish) into shape as he speaks. My turn follows and my pathetic nigiri wobbles unsurely on the plate next to his.

The Japanese diet is undergoing enormous shifts in taste. Seafood and rice consumption are decreasing and bread- and meat-eating are on the up, meaning that the overall diet is less healthy. But as a visitor you can still find fantastic food all over the country, be it in the bento boxes at the train station or the high-end restaurants of Kyoto and Osaka, which recently became the subject of a Michelin guide for the first time.

In Tokyo it is a rite of passage for tourists to get up early and experience the theatre of tuna-selling at the busy Tsukiji fish market. Amid the glassy-eyed mullet and industrial-size mussels, you can witness big fish and big money changing hands. (Kojima told me that top restaurants charge as much as ¥5 000 — about R420 — for one piece of top-quality tuna and recently a tuna was sold at auction for ¥16,28-million, about R1,37-million.

Osaka has always been the commercial capital of Japan, but it has earned a reputation as a mecca for gourmet food. It has been called kuidaore — literally, “bring ruin upon oneself by extravagance in food”. From the takoyaki (octopus balls) you buy in the street to the Japanese take on French haute cuisine at Les Saisons, this is a must-stop for anyone wanting a richer understanding of Japanese food. “Osaka people will try everything,” says Yumiko, our guide. “Tokyo people are more cautious.”

Osaka was the first place, for instance, to get permission to cook blowfish — that much maligned ingredient of the Japanese diet that has a fearsome reputation for occasionally causing respiratory arrest and death to the eater. “Everyone’s interested in blowfish,” says Yumiko when I ask about it. “I ate blowfish four days ago,” she says matter-of-factly. “Poison didn’t kill me.”

Not a natural risk-taker, I opt instead to lunch at Udonsuki, a 200-year-old restaurant with a traditional interior of tatami mats and low tables, where I soon find myself ceremoniously plunging a live shrimp into a boiling vat of noodle soup. Elsewhere, we snacked on box sushi (a distinctive “pressed”, denser version that you find in Osaka) and sampled every strain of noodle Japan can offer, from soba to udon and ramen. In one restaurant we were offered adult-size paper bibs, which I took as carte blanche to eat as messily as I liked.

We travelled from Osaka to Kyoto, Japan’s historic city, on the bullet train, which is as efficient and futuristic as advertised (the average delay last year was six seconds). Because Kyoto is near the Sea of Japan, it has always had access to ingredients and a reputation for great food. It is here that we experienced a traditional multicourse meal at Kanamean Nishitomiya, a two-Michelin star ryokan (traditional Japanese inn), with seasonal dishes presented more like works of art than something to eat. The carved and hollowed orange halves, showcasing slices of duck, Japanese radish and fruits, were so beautiful that it felt almost rude to eat them. Yet somehow I managed.

At another ryokan, dish after dish is delivered by an admirably patient mama-san (hostess), who tries very hard to explain what it is we are being fed: a stuffed lobster, meltingly good sashimi, a sort of fish stew with some unidentified potato substance — the list goes on. We try everything, partly on the grounds of curiosity and partly not to cause offence.

Two hours, 10 dishes and one very exhausted mama-san later, we are delivered two of the biggest oysters you could wish to set your eyes on. My heart sinks. I can eat no more. Finally, reluctantly, I admit defeat. — © Guardian News & Media 2010