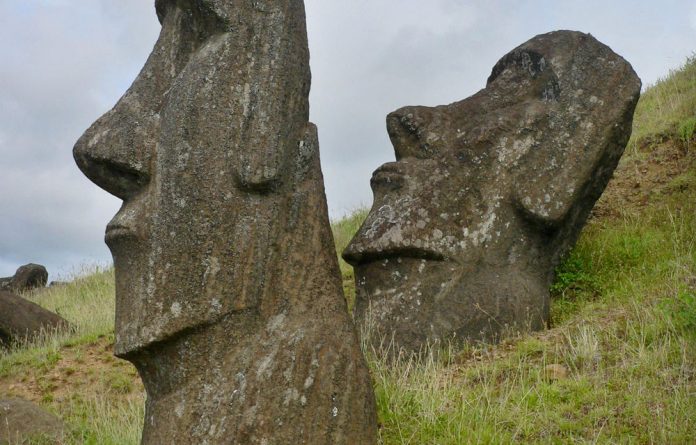 To spend Christmas on Easter Island was more than a fanciful notion. Who hasn’t felt enticed by the image of those giant stone heads that stand sentinel?

Or didn’t have one’s imagination stirred by National Geographic’s account of the archaeological adventurer Thor Heyerdahl’s Kon-Tiki raft expedition to the island? Or (presumably as a child) read fantasist Erich von Däniken’s ludicrous theories of spacemen on a primitivist sculpting camp to Earth? (You either don’t laugh or you laugh louder; he has sold 600-million paperbacks).

The most isolated piece of habitable land on Earth, 24km long, 12km at its widest point, it is 3 800km from the nearest continent, more than 2 000km from the next inhabited island, Pitcairn, where the mutineers from the HMS Bounty settled.

The Dutch stumbled upon the island on Easter Sunday 1772, hence its christening. Its correct name is Rapa Nui. With discovery by the outside world, the population of possibly 15 000 would be devastated — by smallpox, colonial massacres and raids — to a mere 111 survivors, from which all the present-day Rapa Nui (about 3 000) are descended. Many perished from flogging and disease as slaves in the guano mines of Peru. Today, governed by Chile, only Rapa Nui may own land or hold office on the island.

The flight from Santiago is five-and-a-half hours over ocean. The restricted view from the plane makes for a spectacular landing; you feel you are about to fly straight into the cliff side. The United States built the airport during General Augusto Pinochet’s rule as an alternative landing site for the space shuttle.

The climate is pleasantly subtropical. The gentle slopes of the island, covered in golden-green grass and grazed by horses today, were once canopied with forest and the largest species of palm tree on Earth, now extinct, as is every other endemic that existed here. The civilisation that created the statues, called moai, flourished between AD1100 and AD1600.

Mystery
The process of transporting and erecting these giant sculptures led to the deforestation of the island and, with it, the collapse of their agriculture and belief system. By the time Europeans arrived, every moai on the coast had been toppled in war.

To writers such as Jared Diamond (Collapse, 2005), Easter Island has become a metaphor for our own path to ecocide. If a few thousand islanders with only stone tools could destroy their world, he wonders, how can billions of people armed with machines fail to do worse?

The irony today is that the natural resources of the island are once more under threat, this time from tourists. Although visitor numbers are small, they are rising and are already high enough to have a deleterious effect on the environment.

My first sight of the moai was of the largest collection scattered along the slopes of Rano Raraku, an awesome, other-worldly gallery.

Heads stand slanted, giving them a contemplative repose. Only one statue on the island, Ko Te Riku, restored in 1974, has its eyes in place; made with blazing white coral and pupils of black stone, the appearance is quite altered, from benevolent ancestor to “Big Brother is watching”.

Nearly all moai face inland. On average six metres high (the tallest standing is 12m), they are mounted on impressively constructed stone burial platforms called ahu. At the quarry, you can see the moai lying supine in various stages of preparation, from initial excavation of the rock to near completion, before events, still unclear, disrupted the society and the islanders abruptly downed tools.

From the quarry the giant statues were dragged the length and breadth of the island.

Developing their own character
As a child, my Rapa Nui guide tells me, he wasn’t interested in the statues. They were simply part of the landscape. He preferred surfing, horse riding and drinking with his pals. Only later, as tourism developed, did he start to look at the moai properly. He gradually realised they were part of his identity. Today he has an aesthetic and even emotional connection to the various heads.

The more time you spend looking, the more individual the statues appear.

In their isolation and driven to desperate belief in the powers of their chiefs, the islanders created a remarkable, if obsessive, religion. It held their society together for quite some time, before they descended into warring darkness.

The history of the world is bloody and wretched everywhere, but the isolation of the society on Easter Island and the wonder of their extraordinary achievements, a lasting gift to all mankind, lends them a particular poignancy. One of the saddest stories in the history of mankind, a sobering lesson to our current generations, Rapa Nui is yet mesmerisingly beautiful.

Three-night package tours including flights from Santiago, Chile (five times a week), range from R11 000 to about R26 000 a person sharing. From January 29 to February 13, the islanders stage a colourful festival. On July 11 2010 a total solar eclipse will be visible from Easter Island.