Sarkozy’s Haiti visit a first ever by a French President 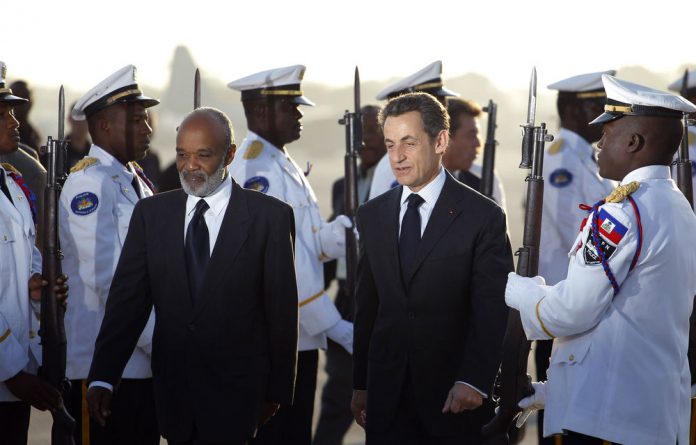 France’s national anthem blared across the tarmac on Wednesday as Nicolas Sarkozy made the first visit ever by a French president to Haiti, once his nation’s richest colony — offering aid to a country prostrate after a catastrophic earthquake.

Haitian President Rene Preval greeted Sarkozy while a brass band played the Marseillaise to start a quick tour of the earthquake-ravaged capital and a French field hospital.

Some Haitians are welcoming France’s new interest in their nation as a counterbalance to the United States, which has sent troops there three times in the past 16 years. But Sarkozy’s visit is also reviving bitter memories of the crippling costs of Haiti’s 1804 independence.

A third of the population was killed in an uprising against exceptionally brutal slavery, an international embargo was imposed to deter slave revolts elsewhere and 90-million pieces of gold were demanded by Paris from the world’s first black republic.

The debt hobbled Haiti, it seemed, for life.

A country plagued by natural and unnatural calamities was desperately poor and mismanaged even before a magnitude-7 earthquake smashed up the capital Port-au-Prince on January 12, killing more than 200 000 people and leaving more than a million homeless.

A new era?
Haitian politicians this week diplomatically skirted the question of French reparations — a demand put to Paris by ousted President Jean-Bertrand Aristide in 2004. That suggests Sarkozy’s four-hour visit could herald a new era.

French officials say Sarkozy will announce details of “a French plan for the reconstruction of Haiti” — if Haitian officials agree.

It differs little from proposals from Haitian, the United States and the United Nations officials to decentralise power away from the devastated capital and boost agriculture and tourism.

The trip brings Sarkozy to an island where, French officials acknowledge, fascination with things French duels with strong, lingering resentments.

One official close to the French presidency, briefing reporters in Paris on condition of anonymity, hinted that France is not deaf to calls for reparations, calling Sarkozy’s visit “an occasion to show that France is mobilising to give Haitians control of their destiny and pay past debts.”

France has already said it was canceling all of Haiti’s €56-million (US$77-million) debt to Paris.

In 1825, crippled by the US-led international embargo that was enforced by French warships, Haiti agreed to pay France 150-million francs in compensation for the lost “property” — including slaves — of French plantation owners.

By comparison, France sold the US its immensely larger Louisiana Territory in 1803 for just 60-million francs. The amount for Haiti was later lowered to 90-million gold francs.

Haiti did not finish paying the debilitating debt — which was swollen by massive interest payments to French and American banks — until 1947.

But Haiti’s wealth already was destroyed. It had been the world’s richest colony, providing half the globe’s sugar and other exports including coffee, cotton, hardwood and indigo that exceeded the value of everything produced in the United States in 1788.

By the early 1780s, half of Haiti’s forests were gone, leading to the devastating erosion and extreme poverty that bedevils the country today.

France’s other former colonies in the region — Guadeloupe, Martinique, St. Martin, St. Barts and Guiana (in South America) — all have voted to remain part of France and send legislators to the French parliament. — Sapa/AP