Answer is blowing in the wind 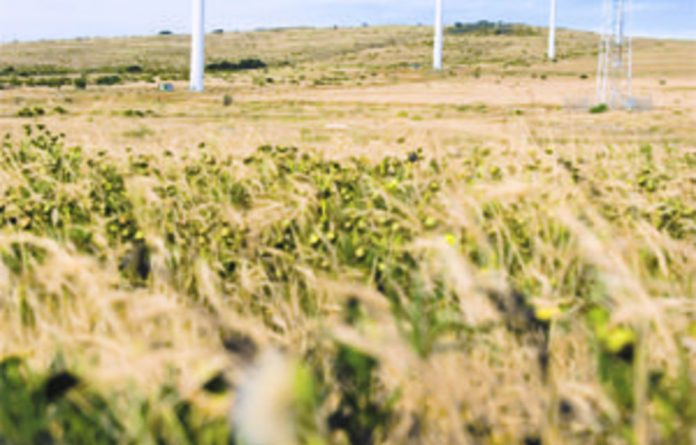 A community in the Eastern Cape in South Africa that was given its land back 16 years ago, is planning a different kind of farm. And community members are preparing to reap the whirlwind.

The Mfengu tribe lived in Tsitsikamma, a coastal area about 200km west of Port Elizabeth, for 140 years, before the apartheid government forcibly removed them to the Ciskei in 1977. But the tribe got its land back in 1994, even before the Restitution of Land Rights Act came into effect, as a result of strong lobbying by the community.

Despite the return of their ancestral land, however, the community remains desperately poor and lacks opportunities. But this is all set to change when an agreement giving the Mfengu a share in a proposed R1-billion wind farm on their land kicks into gear.

The farm is expected to generate enough electricity to power up to 400 000 South African houses. Wind power has a promising future in South Africa, with a number of projects planned.

The government plans to have about of 400MW of wind power ready by 2013, with more to come later. All the wind projects under way at present might ultimately deliver 5 000MW of power to Eskom’s grid. This means that some start-up wind farm projects might not get in on the deal.

The Mfengu community is desperately hoping that their wind farm will be one of those included in the government’s plans to extend its grid and make power in South Africa more green. They believe they have the edge with strong national and international partners.

At the end of last year representatives from the community signed agreements with a Danish and South African business consortium in a traditional ceremony. The partners in the deal signed a memorandum of understanding at the community’s homestead at Wittekleibosch to develop the Tsitsi kamma Community Wind Farm project.

The excited community slaughtered a goat and treated their guests to a traditional home-cooked meal. They believe that the power of wind is the only way to secure their future. At the moment the community relies on subsistence farming and at the same time lacks opportunities for meaningful education.

Community leaders hope that their children will be able to work at the wind farm. ‘This wind farm will empower our community and help our kids to realise their dreams,” said community leader Thobile Makamba, who believes the strong support from the Danish and South African partners shows that the project will be a success.

The 20-turbine wind farm will be built on a 7 000ha plot owned by the Tsitsikamma Development Trust, which protects the community’s interests in the deal and manages the land on their behalf.

The trust will own at least 10% of the equity of the project and will receive an equivalent proportion of revenue during the plant’s 25-year lifespan.

The project managers have embarked on a feasibility study that includes investigating how to connect the wind farm to the Eskom grid, National Energy Regulator of South Africa licensing applications and environmental impact assessments.

The Eskom grid connection could be expensive, according to Watt Energy chief executive and Eastern Cape Community Wind Energy Development Association chairperson Mcebisi Msizi. Early investigations by the managers of the project revealed that the cost could be more than R100-million.

Msizi said that, compared with other wind projects with which the Tsitsikamma would be competing to access Eskom’s grid, their project was significantly more developed. The farm is now undergoing extensive wind mapping, he said.

Dan Frederiksen, the Danish ambassador, said that Denmark is proud of its association with the project: ‘Our aim is not only to assist Danish companies enter the South African market, but also to assist South Africa to become greener while producing more electricity and developing a poor community at the same time.

‘I am therefore delighted that there is a strong development component to the project. ‘Watt Energy and Tsitsikamma Development Trust, as two of the project’s owners, will bring back a large portion of the investment to the local community for the community to decide on its own development projects.”

The partners hope that the feasibility studies will be completed at the latest by the middle of this year, so that they can start moving forward with the project.

Groups work strictly for birds
Several environmental groups have voiced concern about the effect that wind farms could have on birds.

The groups emphasise that wind power is much greener than coal-fired power stations but warn that, if developed without appropriate consideration of the possible effects, it could make life for birds in South Africa much harder.

‘Cumulative impacts may be the greatest threat posed by wind energy developments to birds,” said Jon Smallie, manager of the EWT’s wildlife and energy programme.

‘The environmental impact assessment process does not take these cumulative impacts into
account adequately. We are concerned that more and more wind farms are under application, often close to one another, particularly in the Eastern and Western Cape.”

Mark Anderson, executive director of BirdLife South Africa, said: ‘While a particular site might be acceptable for development from an avifaunal point of view if viewed in isolation, when neighbouring areas are also subsequently developed, the combined impact of these multiple developments on certain bird species could be significant.”

International best practice, the groups said, has shown that it is possible for wind energy
infrastructure and birds to coexist if the correct sites are chosen.

Only seven commercial-sized wind turbines are in operation in South Africa, three at the Eskom’s demonstration facility at Klip heuwel, north of Cape Town, and four at the private Darling wind farm to the city’s northwest.

‘This means that our hands-on experience of the impacts of wind turbines on birds is very limited, since we have no local data on which to base our assessment,” said Anderson.

The groups propose proactive engagement with the wind energy industry, the commissioning of a national strategic assessment of wind energy and birds and input into environmental impact assessments for new wind farms as a solution to ensure that birds are not endangered.

A national strategic assessment will gauge the risks to both birds and developers by identifying sites of concern where birds could be affected significantly by wind turbine development and areas where the effects would be less serious.