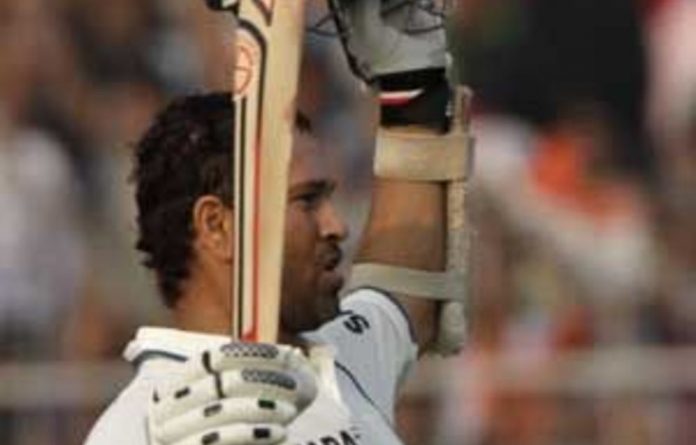 Indian media lined up on Thursday to shower the “God” Sachin Tendulkar with front-page tributes and predict the record-shattering batsman was not finished yet.

Tendulkar, who turns 37 in April, smashed the first-ever double century in one-day international’s on Wednesday, pounding the South African bowlers with 25 boundaries and three sixes.

Immortal at 200, screamed a banner headline in the Times of India, while the Indian Express ran a half-page photo of a celebrating Tendulkar with the word God!

A similar front-page photo in the Hindustan Times, headlined 200 not out, was followed by an appreciation by Tendulkar’s former teammate and bowling great Anil Kumble.

“The way he celebrated when he reached his 200 epitomised the man’s persona,” Kumble, an ex-India captain, wrote.

“There were no running laps around the field, no aggressive gestures, nothing over-the-top.

“He did what he always does. Raised both his arms, closed his eyes for a moment and quietly acknowledged it had been done.

“If the youngsters in the team can take even 10% of what he does, they will be better cricketers for it.”

A memorable year
The Times of India highlighted the veteran’s scintillating form in the last 12 months, during which he has hit 10 international centuries, including six in Test cricket.

“Treasure this new, improved Tendulkar,” the paper said. “He is, by far, still India’s most valuable player, and will remain so till he decides to call it quits.”

Newspapers highlighted Australian spin legend Shane Warne’s tweets as he followed the knock of one of his close friends.

“Come on Sachin, my friend, get your 200. World record to please! you deserve it.”

The Hindustan Times cricket correspondent wrote: “It’s never a good idea to try and speak for a whole nation. But on Wednesday it was a risk worth taking.

“To Sachin Tendulkar, on whom more words have been written than any other cricketer, including Sir Donald Bradman, two words will suffice: Thank you.”

The pavilion at the Roop Singh stadium in Gwalior where Tendulkar achieved the feat will be named after him, the Press Trust of India (PTI) reported.

The chief minister of Madhya Pradesh state, where Gwalior is located, also announced that one of the main roads in the town will be named after Tendulkar, PTI said. — AFP