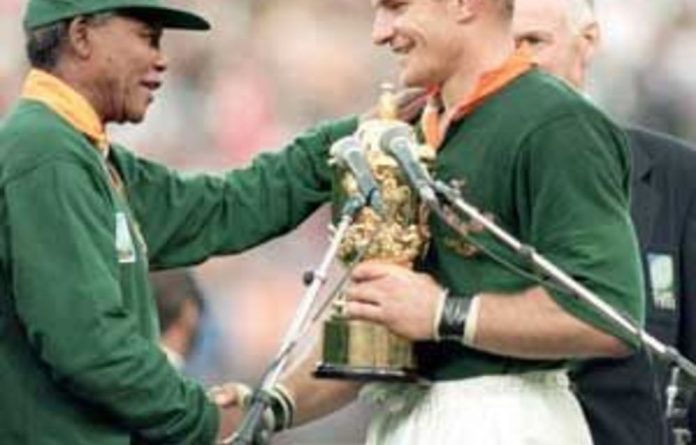 Director Clint Eastwood includes a scene in his film Invictus to demonstrate the opposition among black sports administrators to the Springbok rugby jersey and emblem.

In the movie, former president Nelson Mandela narrowly wins grudging approval from the National Sports Council to retain the symbols of the apartheid era as part of his strategy to reach out to the minority Afrikaners.

The meeting and Mandela’s eloquent address are not mentioned in the book Playing the Enemy on which the film is based.

According to former anti-apartheid campaigner Sam Ramsamy the opposition had existed but by 1995, the year of South Africa’s World Cup triumph, Mandela had already won over the dissenters with extensive one-to-one meetings.

He pulls no punches when he recounts the long fight to convince the rugby world that racially selected sides were morally wrong.

Tough time
“Rugby union to us as part of the movement to deracialise sport in South Africa was the most resistant, the most conservative and the International Rugby Board [IRB] did not help us at all,” he said.

“In fact they sabotaged all our efforts in the early stages. They were not any help at all, they were a great hindrance. We had a very tough time with the rugby people internationally. The individual boards were as difficult as the rugby board itself.”

Ramsamy, who led the South African delegation to the 1992 Barcelona Olympics after the republic was re-admitted to the Olympic movement, said the feeling then was that the Springbok emblem should play no part in the new South Africa.

“And then of course when Mandela came in he said: ‘No, we have to make sure we are inclusive and the Springbok emblem means quite a lot to white South Africans and especially Afrikaner rugby players’,” Ramsamy said.

“Mandela said we need to make it inclusive … in fact I had an extremely long meeting with Mandela at his official residence in Pretoria and he explained the circumstances.

“I made it very clear in principle I don’t want the Springboks but now that you’ve decided on this and you’ve explained the situation, we go along with it. Most of the black South African administrators had an identical view to me.

Mandela’s stance was triumphantly vindicated by the Springboks’ victory in the World Cup final and this year South Africa will host the continent’s first soccer World Cup, a vision which helped to sustain Ramsamy in exile.

Still much to be done
However, Ramsamy said, there was still much work to be done at home.

“Blacks in South Africa have done so much to reconcile with the whites. But I don’t know whether all whites have understood and accepted this magnanimity of forgiveness and acceptance.

“We are trying to normalise the situation but I’m not sure all South African whites understand that. That is a concern of mine. Moves are being made to ensure equal opportunities for all but it’s coming very, very slowly.

“We would have a tremendous, super team which very few countries in the world could beat.

“That is my ambition and my ultimate goal.” — Reuters