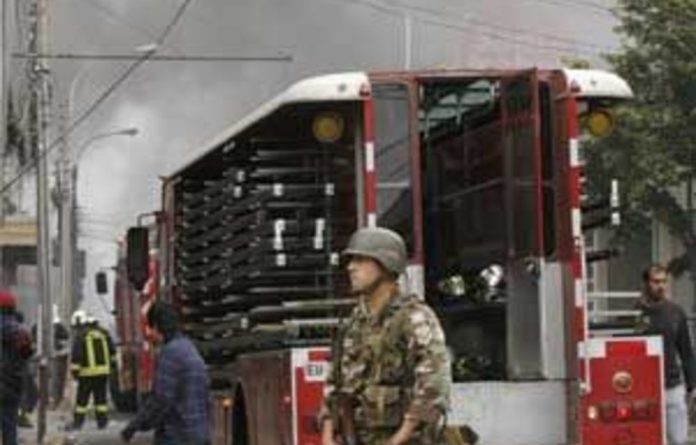 Aid pledges poured into Chile from around the world on Monday after the government made its first requests for help as the rising death toll from the devastating earthquake reached 723.

About two million Chileans, or one eighth of the entire population, are estimated to have been affected by Saturday’s massive quake, which along with an Ecuador quake in 1906 is the seventh most powerful on record.

Chilean Foreign Minister Mariano Fernandez said after conferring with Bachelet that dozens of satellite phones for quake-hit areas were on their way.

He told a press conference that foreign nations were also sending mobile bridges and field hospitals.

United States Secretary of State Hillary Clinton, preparing to visit the Chilean capital on Tuesday to assess emergency needs, said she would bring along 20 satellite telephones and a technician.

Nations pledge support
Clinton, who was in Montevideo for Monday’s inauguration of Uruguayan President José Mujica, said US search and rescue teams were also on standby.

Australia, which along with most of the Pacific was placed on tsunami alert after the huge quake, pledged $4,5-million in emergency and reconstruction aid.

Foreign Minister Stephen Smith said Australia would also provide emergency equipment such as portable generators as he expressed sympathy over the tragedy.

The European Union meanwhile said it was ready to deploy “an assessing mission” to look at structural damage to hospitals, schools and other facilities, its foreign policy chief Catherine Ashton said from Brussels.

The European Commission has already approved $4-million in emergency aid for Chile, while Japan pledged $3-million and China $1-million.

‘If necessary, we will send blood as well’
Chile’s neighbours also responded.

Lula, who also attended Mujica’s inauguration, later stopped in Chile and huddled with Bachelet at Santiago’s airport before returning home.

Earlier, he said Brazil would do its utmost to help Chile as his government promised to send a field hospital along with search and rescue teams.

Bolivia announced it was sending 60 tonnes of humanitarian aid and an unspecified amount of drinking water.

“If necessary, we will send blood as well,” presidential spokesperson Ivan Canelas told reporters in the central Bolivian city of Cochabamba.

Chile is one of Latin America’s wealthiest nations and better equipped than most to withstand and recover from earthquakes, but the total damage from the quake has been forecast at between $15-billion and $30-billion.

Alicia Barcena, executive secretary of the UN Economic Commission for Latin America and the Caribbean based in Santiago, said the world body was rushing 45 satellite phones that should arrive on Tuesday.

“The Word Food Program has offered 30 tonnes of food, ready to be transported from Ecuador,” she added.

Bachelet, due to hand over power to president-elect Sebastián Piñera on March 11, said the air force had begun flying in food and aid to badly-hit areas, including some largely cut off by the quake.