‘We voted ANC but it seems we are forgotten’ 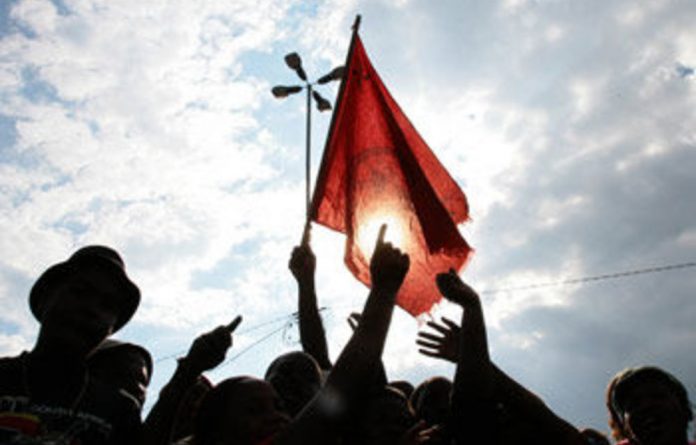 South African police fired rubber bullets and water cannons on Tuesday to quell protests in Orange Farm near Johannesburg in which one policeman was shot in the chest.

With just 99 days to go before the Soccer World Cup — which will put South Africa at the centre of global attention — a string of violent protests have provided scenes reminiscent of the apartheid era.

‘We are forgotten’
The policeman was taken to hospital and his condition was judged stable. Eleven demonstrators were arrested.

“We want better lives, development and dignity. Each and every time we voted for the ANC but it seems we are forgotten,” said Nicky Khulu, a 29-year-old resident of Orange Farm, a dusty township outside Johannesburg.

For more than a week, Khulu and hundreds of other residents around Johannesburg have protested at squalid living conditions in Africa’s richest city by blocking a major road with burning tyres and rocks.

“Politicians have money for big houses, luxury cars and expensive clothes but they are not earning their money by doing things for the poor,” said Khulu, who is unemployed.

“For 20 years I have lived in a shack. Nothing has changed for us after apartheid ended. Things have gotten worse.”

Residents accuse city officials of corruption and pocketing money meant to be used to upgrade roads and other infrastructure.

Despite emerging from a recession in the third quarter of last year, South Africa is only projecting modest growth this year, limiting what President Jacob Zuma’s government can spend on infrastructure, which it says is a priority.

“Their demands are reasonable as you can see that projects are unfinished here and there’s sewage in the streets. The ball is now in our court as government to address the issue,” he said after meeting with community members on Tuesday.

Motshekga said more political oversight was needed in the area to ensure that people given government contracts were completing them.

This was after he was shown an incomplete road with some of the building material still on the scene.

He would take the people’s grievances back to the government to be urgently addressed, he said.

Motshekga visited various sections of Orange Farm on Tuesday and was shown unfinished roads and sewage flowing down the streets into people’s houses. He was also shown an area with gravel roads and another where people had to be moved because of water.

“The government moved people from Lakeside because it is a wetland, but some still insist on living there. We cannot have a country where everybody decides what they want; we need a firmer government on such issues,” Motshekga said.

The residents apparently mounted their protest after the council moved to repossess the property of residents who had not paid their rates and taxes, said Eye Witness News.