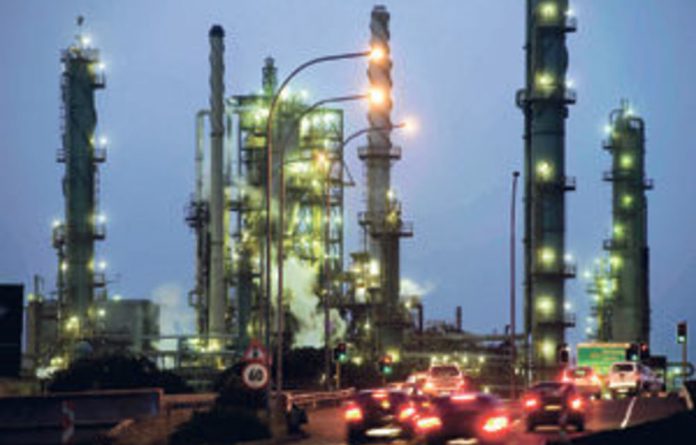 A war is developing around PetroSA’s plan for a new 400 000-barrel-per-day oil refinery at Coega, which is projected to cost $10-billion (R77.5-billion) and has been dubbed Project Mthombo.

PetroSA argues that a decision has to be made urgently, that it is ‘now or never” for the proposed refinery and that it will provide the country with security of supply and will set it up as a player that can supply Africa with fuel.

Opponents such as BP Africa argue that supply security is not an issue and that there is no need to build a new refinery when capacity at existing refineries can be increased and the shortfall in refined fuel can be imported.

Department of energy spokesperson Bheki Khumalo says the government’s policy is that there is an increased need for extra refining capacity in South Africa.

‘PetroSA was responding to a policy position that was approved by Cabinet in the energy security master plan for liquid fuels, which identified the need for investment in new refinery capacity in our country,” said Khumalo.

Project Mthombo would increase refining capacity in South Africa by 58%, but critics argue that there is no need for such a massive increase.

PetroSA argues that estimates show that the country will need to import in the region of 150 000 barrels per day by 2015.

‘No existing international oil company in South Africa has indicated a willingness to invest in additional capacity to cater for SA’s increasing needs,” said a PetroSA spokesperson.

The BP spokesperson admitted that the majority of its spend on the Sapref refinery of late had been on maintaining its existing infrastructure and said that any increased investment would need to be rewarded adequately.

‘There is enough surplus refinery capacity in the world and it is likely to remain so beyond 2020,” said BP Africa chief executive Sipho Maseko. ‘It therefore makes no sense to burden South African taxpayers when better and cheaper options are available than building a new, expensive refinery.”

But refining crude oil in a South African refinery instead of importing finished fuel products would have a major positive impact on South Africa’s balance of payments, which in turn has an impact on GDP growth.

Frost & Sullivan analyst Ross Bruton says it will be a lot cheaper to import crude oil and refine it in South Africa. Bruton says that expanding existing capacity is an option but that the technology employed in most of South Africa’s existing refineries is quite old.

However, Bruton says that one potential problem with the proposed refinery at Coega is that it will be far away from the major market and that an additional pipeline may have to be built from Coega to Gauteng.

South Africans will fork out for a new R12-billion fuel pipeline to be built between Durban and Gauteng, with the increased 7.5c levy per litre of fuel announced by Finance Minister Pravin Gordhan in his maiden budget last week to fund the project.

The proposed Coega to Gauteng pipeline has not been factored into the $10-billion cost for the refinery.

PetroSA argues that currently, 70% of the country’s crude and 40% of its refining activity is confined to the Durban area, where the port congestion, air quality and community health issues militate against increasing refining activities to any major degree. It says all the major inland markets are supplied via a single pipeline system from Durban, with obvious risk implications.

Jeremy Wakeford, from the Association for the Study of Peak Oil, says that building a huge new refinery just a few years before global oil production goes into terminal decline would likely be a massive misallocation of resources.

‘Higher oil prices will dampen domestic demand for liquid fuels, as seen last year,” says Wakeford. ‘The money would be much better spent developing a more sustainable transport system, such as electrified railways in general and light rails in cities.

‘Several of the oil majors are gradually divesting assets in the downstream oil sector [refining and distribution], aware that their own access to crude oil reserves is diminishing,” says Wakeford.

‘Oil production by the majors has been flat for several years.” PetroSA argues that crude oil will be the preferred source of energy for at least the next few decades.