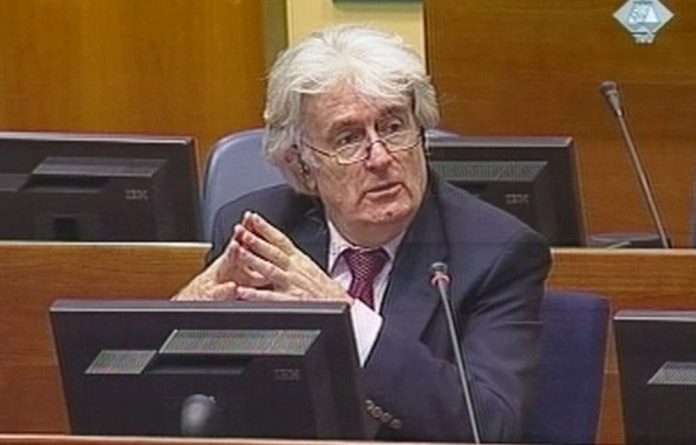 He is accused of master­minding the worst crimes in Europe since the Nazis. His tormentors seek to portray him as a “monster”. But in the long-awaited self-portrait delivered on Monday from the dock of a war crimes tribunal, Radovan Karadzic painted himself as a misunderstood and much-maligned anti-communist, anti-jihadist dissident.

The bombastic warlord associated more than anyone else with the Bosnian bloodbath and “ethnic cleansing”, it transpires, was all along the Vaclav Havel of the Balkans.

It is almost 15 years since the end of the Bosnian war, which left 100 000 people dead, two-thirds of them Muslims mostly killed by Serbs.

Karadzic was the Bosnian Serb political leader and military commander. Cheated of justice, the victims’ families have waited patiently to see him in the dock.

This week, in a four-hour soliloquy behind bulletproof glass at the international criminal tribunal for former Yugoslavia in The Hague, the 64-year-old laid out his version of what happened in the 1992-95 conflict.

“They’re trying to convict us for something we never did,” he said. “There should have been no indictment against me in the first place — There is no Serb responsibility.”

Solid case law has been established, creating juridical facts such as that events in Srebrenica in eastern Bosnia in July 1995 were an act of genocide by Bosnian Serbs seeking to eliminate Bosnian Muslims.

But Karadzic claimed he repeatedly bent over backwards to save a country he is widely seen as having destroyed.

“The Serbs tried to defend themselves by making endless concessions,” he declared. “We had five conferences and five peace plans.

“I, the accused, agreed to four of them — There were 12 cease-fires in Sarajevo, 11 of them breached by the army of the Muslim party.”

In the autobiography he presented Karadzic was a reluctant politician with no leadership ambitions, purely a “servant” of his people. He tried self-deprecation, but occasionally slipped up. “I don’t want to defend myself by saying that I was not important.”

Frequently he shifted into a third person narrative, as if talking about someone else. “Karadzic had been a dissident since 1968,” he said.

In a dark suit and white shirt, playing professorially with his spectacles and constantly rummaging through his shock of silver hair, he was confident and combative. Unlike many of his Serb co-defendants, he was also courteous, referring to the three judges as “Your Excellency” and his poker-faced prosecutor, Alan Tieger, as “my respected adversary”. There was no sneering, no theatrics, no attempt to disrupt the proceedings.

But for many of those watching and listening to him, he was from another planet.

Dismissing the charges against him he failed to address any of the 11 counts, including the mass murder at Srebrenica to the 43-month siege of Sarajevo carried out by forces under his command, the hostage-taking of more than 200 United Nations soldiers and the mini-gulag of camps his subordinates established in the summer of 1992 where thousands of Bosnian Muslims died.

The latter brought a brazen denial. The Muslim and Croat inmates of Trnopolje camp in the summer of 1992 near the purged town of Prijedor were “free people” who were managing their own “collection centre” after fleeing the war.

He went on specifically to attack [UK broadcaster] ITN and the Guardian, which exposed these camps, reporting on emaciated men behind barbed wire.

Karadzic said the journalists, Penny Marshall and Ed Vulliamy, abused his hospitality. They had entered a storage area secured behind barbed wire and filmed “three people” on the other side, making them appear incarcerated. “I don’t know how Penny Marshall can sleep,” he said.

The four-hour performance was a long history lecture on the perennial victimhood of the Serbs, with the villains being Bosnian Muslim jihadists, Croatian fascists, Turks reassembling the Ottoman empire, the Germans completing in 1991 what started in 1941 with the Nazi occupation of Yugoslavia, Nato, the Americans, the Vatican.

“I stand here before you not to defend the mere mortal that I am but to defend the greatness of a small nation in Bosnia-Herzegovina — I will defend that nation of ours and their cause, which is just and holy,” Karadzic declaimed.

That may play well with the tele­vision audience in a Bosnia now more entrenched in its ethnic division than when Karadzic was in his prime. But the tour of 500 years of Balkan history did little to answer the charges of genocide, war crimes and crimes against humanity he faces.

What Karadzic was stopping was the “Green Transversal” — the alleged Bosnian Muslim role in establishing an Islamic caliphate from “the Great Wall of China to the Adriatic”.

For veteran Balkan-watchers, it was a blast from the past, a rerun of the paranoia and propaganda that was the nightly staple diet on Serbian state television throughout the 1990s.

Karadzic was on the run for 13 years, until he was apprehended on a Belgrade bus under a fake identity as a Serbian new-age quack in 2008.

He boycotted the trial opening last year and has repeatedly delayed the proceedings, rejecting defence lawyers and maintaining he needs more time to prepare. This week he was well-prepared, peppering his arguments with PowerPoint projections of TV clips, documentary footage and archive material.

When the trial opened in October, the court heard a tape of him predicting that the forces then under his control would turn the Bosnian capital, Sarajevo, into “a black cauldron where 300 000 Muslims will die — That people will disappear from the face of the Earth.”

Karadzic has another four hours to complete his opening statement. Then it is the turn of the victims, with Bosnian camp survivors filing in to tell their stories. —

An embryonic new Turkey is born

Balkans suffers worst floods in over a century