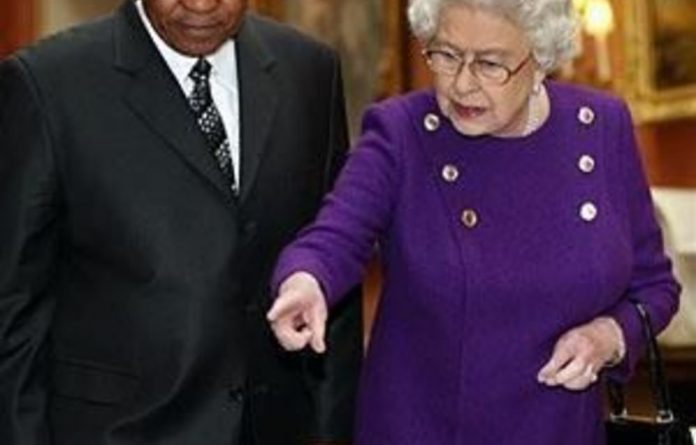 South African President Jacob Zuma met Britain’s Prince Charles on Friday as he ended a three-day state visit clouded by criticism of his polygamy and failure to agree over Zimbabwe.

Zuma bade farewell to Queen Elizabeth II with his trademark handshake with both hands after spending two nights at Buckingham Palace with his latest wife, Tobeka Madiba..

The formal trip — which also included two stadium visits — began on Wednesday with pomp and colour as he was welcomed by the British monarch with a horse-drawn carriage ride down the Mall to
her central London residence.

After events including a visit to the house of South African anti-apartheid figure Oliver Tambo in north London, he was honoured with a full state banquet in the evening.

Media coverage
But the welcome was marred by a row over British media coverage of Zuma’s trip, including the right-wing Daily Mail which questioned: “Jacob Zuma is a sex-obsessed bigot … So why is Britain fawning over this buffoon?”

The Daily Telegraph said that “for all the colourful characters who have visited the Palace during her 58 years on the throne, the South African president is possibly the first guest to be a polygamist”.

Zuma himself was sufficiently incensed by the comments to risk offending his hosts. Hours before meeting the queen, inspecting the guard of honour and listening to the band play both Nkosi Sikelel’ iAfrika, and God Save the Queen, the president was quoted as saying that he was fed up with being judged and sneered at by a country with a hypocritical attitude towards its former colonies.

On Friday he met Prince Charles, heir to the British throne, at his London home, Clarence House, where they were joined by Nicola Brewer, Britain’s High Commissioner to South Africa.

In an echo of the rocky start to the visit, his last day was marred by a protest outside South Africa House, home to his country’s High Commission in London.

Around 50 demonstrators chanted “Shame on You, Zuma,” voicing anger at what they see as his failure to pressure Zimbabwe’s President Robert Mugabe to reform.

“Zuma Save Zimbabwe,” read one banner, while a man in a Mugabe mask wandered around with a sign stating “Zuma — have another wife on me”.

At a meeting with British Prime Minister Gordon Brown on Thursday, Zuma failed to persuade the British prime minister to drop European Union “smart sanctions” against the Zimbabwean elite — although Brown did agree to support the reinstatement of Zimbabwe’s voting rights at the United Nations.

South Africa believes Zimbabwean president Robert Mugabe uses the sanctions to delay real reform changes, whereas the EU insists they have no relevance for people on the ground and the promotion of democratic practice.