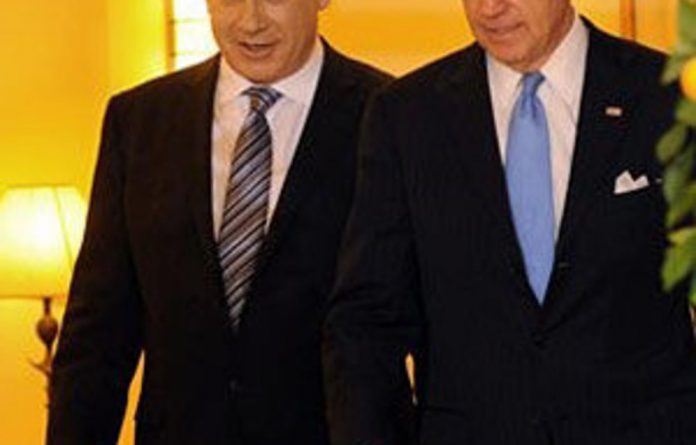 He said the agreed resumption of Israeli-Palestinian talks through US mediation was a “real opportunity” for peace.

Biden, who arrived on Monday, is the highest-ranking member of President Barack Obama’s administration to visit Israel, where concern is high over Iran’s nuclear programme.

“We’re determined to prevent Iran from acquiring nuclear weapons and we’re working with many countries around the world to convince Tehran to meet its international obligations and cease and desist,” Biden said after a meeting with Prime Minister Benjamin Netanyahu.

“There is no space between the US and Israel when it comes to Israel’s security,” Biden said as the two leaders made statements to the media.

Netanyahu voiced appreciation for what he described as Obama’s efforts to lead the international community to place tough sanctions on Iran.

“The stronger those sanctions are, the more likely it will be that the Iranian regime will have to choose between advancing its nuclear programme and advancing the future of its own permanence,” Netanyahu said.

Israeli political sources expect Biden to make clear, as other US officials have done, that Obama wants no strike on Iran, notably by Israel, while Washington seeks to curb Tehran’s nuclear programme by means of sanctions.

Netanyahu, whose country is widely believed to be the Middle East’s only nuclear power, has called for strong sanctions to cripple Iran’s trade in oil and gas. Iran has denied it is seeking atomic weapons, saying it only wants nuclear power.

Peace talks
Biden’s visit coincided with Palestinian and Israeli agreement, in meetings with Obama Middle East envoy George Mitchell this week, to resume peace talks suspended since December 2008, amid scepticism about their chances for success.

“I think we are at a moment of real opportunity,” Biden said at an earlier meeting with Israeli President Shimon Peres.

He plans to see Palestinian leaders in the occupied West Bank on Wednesday.

In his statement at the meeting with Netanyahu, Biden said that both Israel and the Palestinians would have to “make some historically bold commitments” to achieve peace.

Netanyahu, in pledging to work with Washington to reach a peace deal with the Palestinians, repeated a key Israeli condition that they recognise Israel as a Jewish state — a demand they have rejected.

He said any peace accord must guarantee Israel’s security “for generations to come”. — Reuters

Explainer: How severe are the new sanctions on Russia?